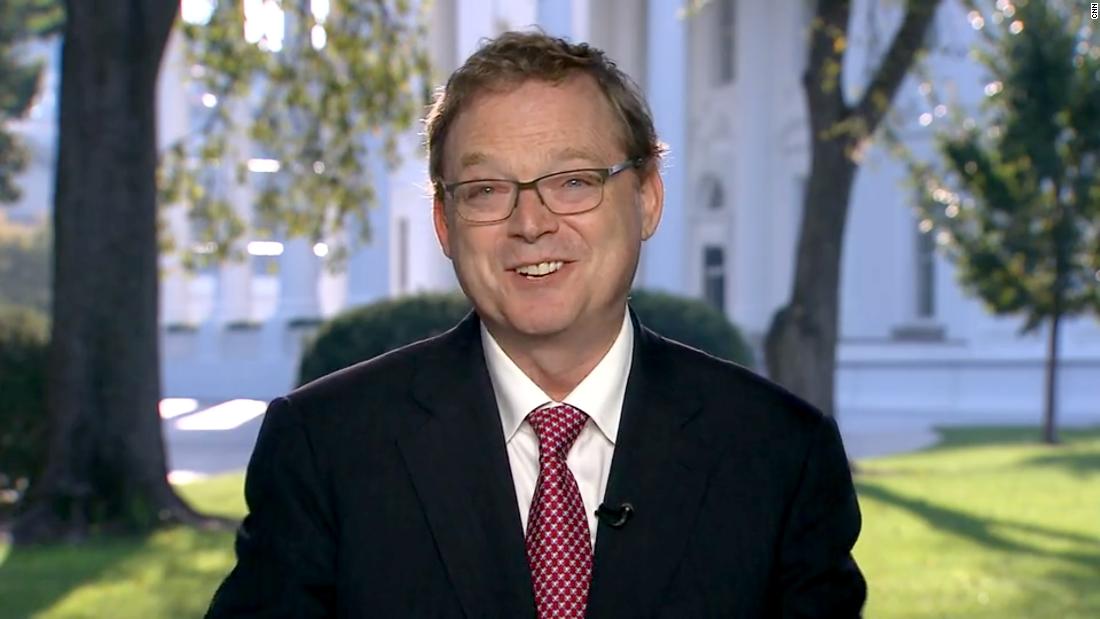 The Goldman Sachs economics team “almost at times looks like the Democratic opposition,” Hassett told CNN’s Poppy Harlow on Tuesday.
The comment came after Harlow asked Hassett about a Goldman Sachs research report warning that a 25% US tariff on all imports from China could wipe out corporate profit growth in 2019.
Hassett said he hadn’t read the research, but went on to criticize Goldman’s track record. Hassett claimed its analysis of last year’s tax cuts was “really, really wrong and timed in a partisan way.” He said Goldman’s analysis predicted the tax cuts would be “really harmful” to the economy or have little impact before jacking up its forecast after they passed.
“So maybe they’re just trying to make a partisan point before the elections,” said Hassett, chairman of Trump’s Council of Economic Advisers.
Keep in mind that Goldman Sachs (GS), like other investment banks, charges clients to access their economic and market insights. Investors rely on that research to be nonpartisan.
Goldman Sachs declined to comment about the criticism.
It marks another chapter in Team Trump’s love-hate relationship with Goldman Sachs, the most powerful firm on Wall Street.
Trump blasted Goldman Sachs during the 2016 presidential campaign. He claimed Goldman Sachs had “total, total control” over his rivals Hillary Clinton and Ted Cruz.
Trump’s closing campaign ad flashed an image of Lloyd Blankfein, then the CEO of Goldman Sachs, as the candidate’s narration condemned the “global power structure” for robbing America’s working class.
After the election, Trump reversed course.
He named former Goldman Sachs partner Steve Mnuchin to the powerful role of Treasury secretary. Trump hired Gary Cohn, a registered Democrat who was then president of Goldman Sachs, to be the face of his economic team. (Cohn left earlier this year because of a disagreement over trade.)
In the 2016 race, Clinton received $ 388,426 from individuals at Goldman Sachs, more than any other candidate, according to OpenSecrets. Trump received $ 5,607, according to OpenSecrets. Then again, Goldman Sachs employees contributed more to Republicans than Democrats overall in 2016 federal races.
Blankfein backed Clinton in the election.
However, after the election, Blankfein gave Trump credit for the soaring American economy.
“If the president didn’t win, and Hillary Clinton won … I bet you the economy is higher today than it otherwise would be,” Blankfein told CNN in February.
Veterans of Goldman Sachs have gone on to work in Republican and Democratic administrations. Robert Rubin, the former co-chairman of Goldman Sachs, served as Treasury secretary under former President Bill Clinton.
Hank Paulson had been the chairman and CEO of Goldman Sachs before leading the Treasury Department under former President George W. Bush during the 2008 financial crisis.

China says it will never…