Latest News
Home /The Dow will fall back to coronavirus crash level below 19,000 before new high: CFO survey 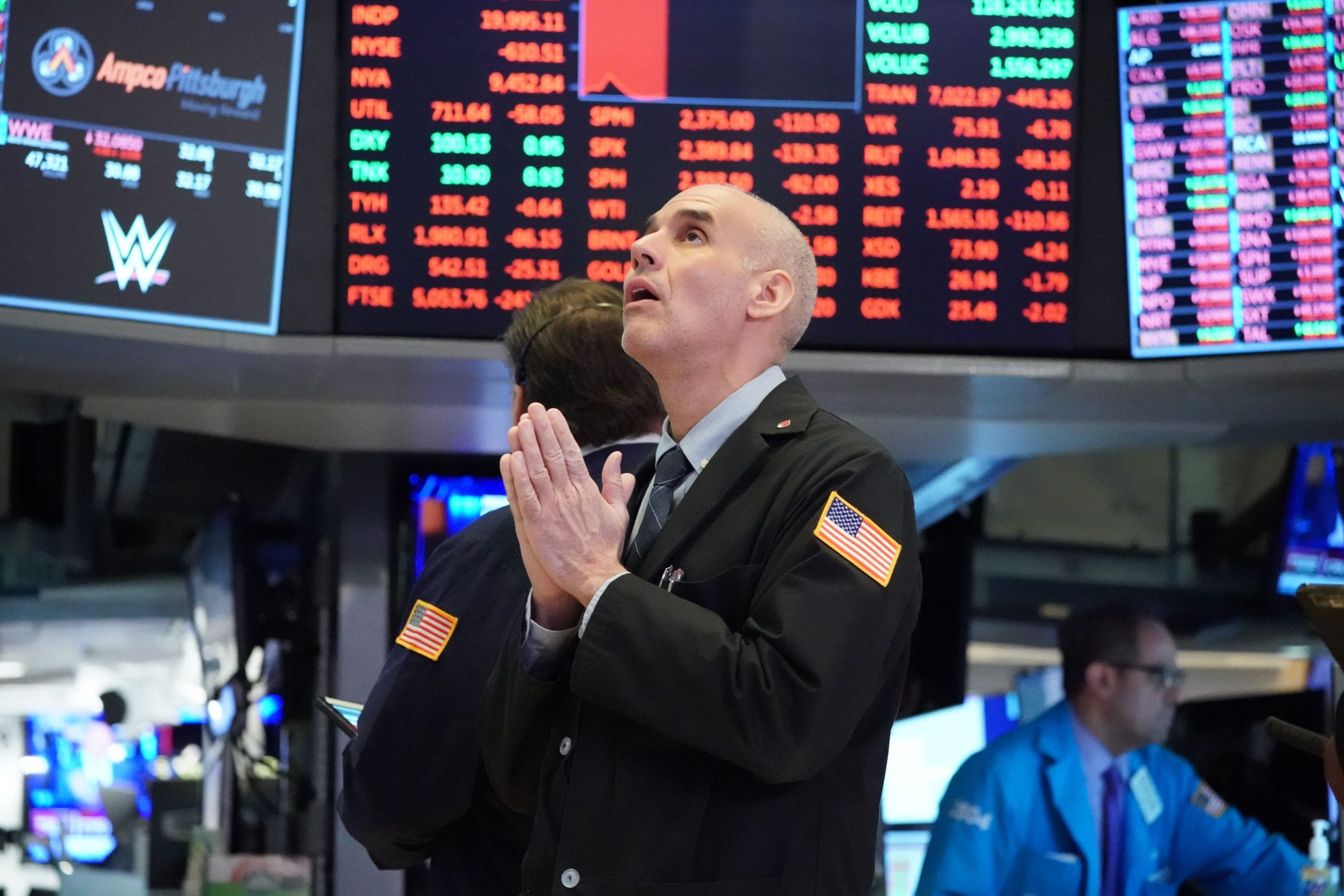 Traders work on the floor at the opening bell of the Dow Industrial Average at the New York Stock Exchange on March 18, 2020 in New York.

Chief financial officers of major corporations around the globe are more likely to believe the Dow Jones Industrial Average will retest its coronavirus crash level, below 19,000, before reaching another stock market record high above 29,000, according to the second quarter 2020 CNBC Global CFO Council Survey.

Only 22% of global CFOs expect the Dow to reach a new record high without first experiencing another major decline, while 51% of CFOs are betting that the Dow is headed back below 19,000. The bleakest outlook comes from CFOs in the EMEA (Europe, Middle East and Africa) region, where only 10% of CFOs believe the Dow is headed for another record. That’s versus 70% of EMEA chief financial officers who see another big drop in U.S. stocks ahead.

Many market observers have argued that the recent stock market rally is hard to square with economic reality â€”that stocks are, in fact, divorced from real economic conditions â€” and North American-based CFOs are tilted to the negative, but less so than global counterparts. Nearly half (46%) expect the Dow to fall back below 19,000, but one-third (33%) think a new stock market record is coming first.

Stock were less volatile than some had been anticipating on Monday, as the economy reopened across states but after a weekend of widespread protests in U.S. cities over racial injustice and police brutality.

Twenty percent of CFOs in the EMEA and North American regions said they were “not sure”‘ about the next major move in U.S. stocks. CFOs from Asia were almost twice as likely to express uncertainty, with 37% preferring not to make a call on the Dow, though the rest of Asia-based CFOs were more negative, with 44% expected a Dow decline back to the March low.

More CFOs around the world expect the Dow Jones Industrial Average to retest its coronavirus lows from March below 19,000.

Two-thirds of U.S.-based CFOs support another round of federal stimulus, the CNBC survey found. But North American CFOs do not endorse the Federal Reserve considering negative interest rates, with 85% opposing that central banking concept.

The CNBC Global CFO Council represents some of the largest public and private companies in the world, collectively managing more than $ 5 trillion in market value across a wide variety of sectors.  Forty-one of the 130 members of the council responded to the survey, which was conducted from May 14â€“28 (15 from North America, 10 EMEA and 16 APAC).

Some notable billionaire investors have issued their own warnings about stocks and expressed fears about another leg down in the market, including Oaktree Capital’s Howard Marks and Appaloosa Management founder David Tepper. But views on Wall Street can change quickly amid the current, unprecedented conditions. Goldman Sachs strategists have pulled their recent prediction that the S&P 500 could fall by 20%. “The powerful rebound means our previous three-month target of 2,400 is unlikely to be realized,” the strategists wrote in a May 31 note. Now the Goldman equity strategist team sees S&P downside limited to 10%.

The overall economic outlook from CFOs has worsened in recent months as they have gained a clearer picture of the damage their businesses will sustain as a result of the Covid-19 pandemic, with the Q2 survey finding CFOs around the world negative on the GDP outlook in every global region, and describing conditions in the U.S. in the worst terms in the history of the six-year old CNBC survey.

A decrease in demand from the U.S. consumer was cited by 80% of North American CFOs, with slightly more than half (53%) describing the demand drop as “major.” A little under half of North American CFOs (46%) expect that supply chains will take between three and six months to return to normal.

While the view from this group of high-ranking executives has turned more dour as the coronavirus crisis deepened, it has not yet influenced CFOs outlook on the 2020 presidential election, with North American-based CFOs still expecting President Donald Trump to win reelection, by a 2-to-1 margin â€” 67% vs. 33%.