Latest News
Home /Stimulus checks worked, many retailers say, but the bump may be short-lived 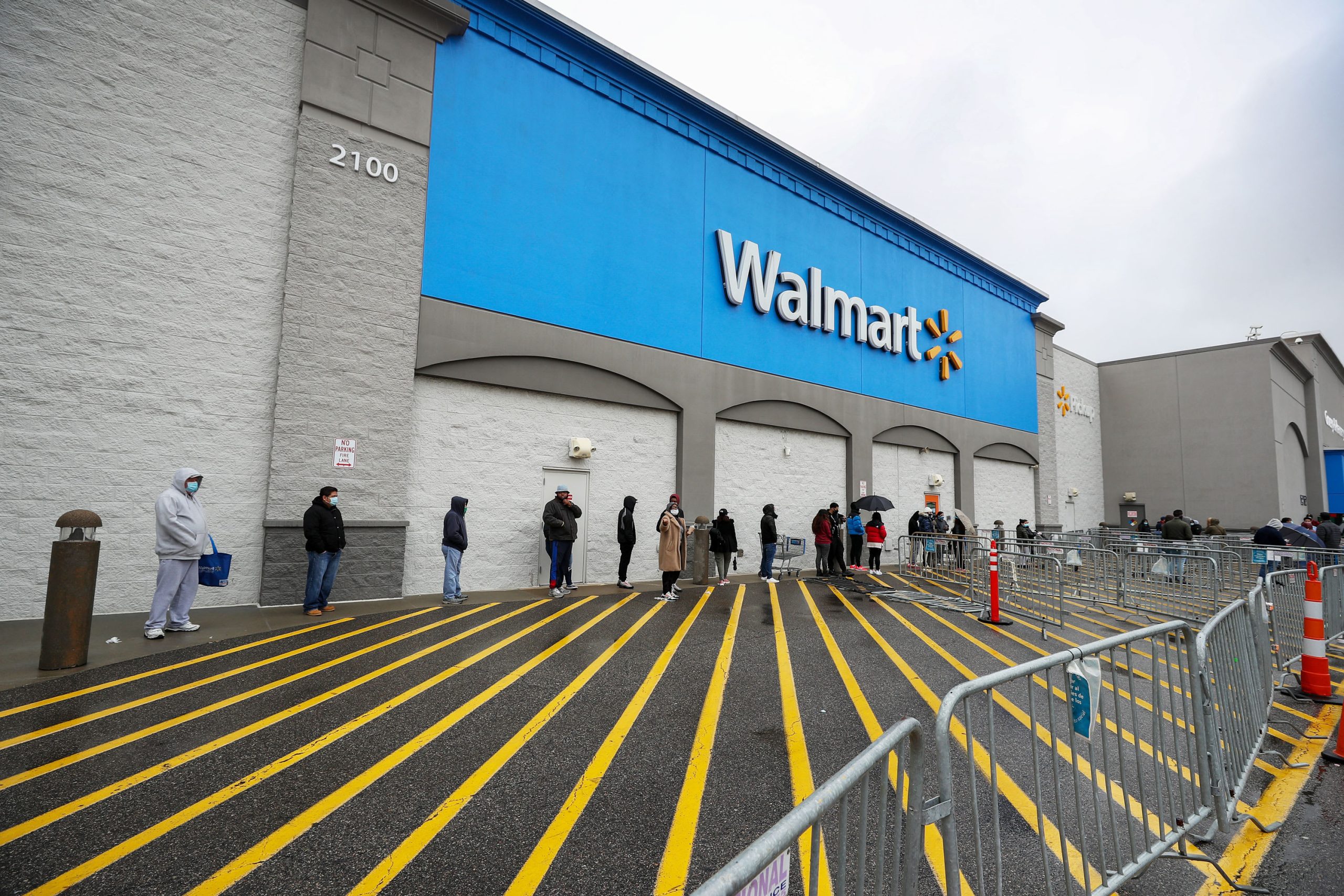 Americans lined up to buy goods at supermarkets like Costco Wholesale and Walmart as fears over COVID-19 pandemic in New Jersey, United States on April 18, 2020.

During Walmart‘s earnings call this week, CEO Doug McMillon said the big-box retailer has seen different phases of shopping during the coronavirus pandemic.

First, he said, customers stockpiled food and household essentials. Later, they sought out items that helped them work, learn and entertain themselves during long days at home.

In the final weeks of April, another trend emerged: Customers were buying more TVs, clothing, sporting goods and toys with money they got in stimulus checks from the U.S. government.

The stimulus checks were part of a historic $ 2 trillion relief package Congress passed in March. By issuing the checks, the government aimed to spur consumer spending to get the economy going again after the coronavirus pandemic ground it to a near halt. The government has sent out millions of them, in amounts as large as $ 1,200, depending on income level. (People making more than $ 99,000 a year didn’t get a check at all.)

The checks appear to have had their desired effect. In particular, they helped drive purchases of nonessential items that people had been skipping during the early days of the pandemic.

An employee prepares a burrito bowl at a Chipotle Mexican Grill Inc. restaurant in Louisville, Kentucky.

The bump was hard to measure and may not last

But even as companies described the sales bump, they were hesitant to forecast future sales and spending patterns.

First, it’s hard for companies to separate the impact of the stimulus checks from other factors.

Shopping and spending patterns have changed dramatically and unpredictably during the pandemic, with consumers hoarding some products and avoiding others. Many states began to loosen or lift lockdowns in April, contributing to foot traffic at stores. For home improvement retailers, spring is usually the busiest sales season.

For instance, Lowe’s said it was seeing strong sales even before stimulus checks arrived. During long stays at home, Ellison said, more customers were coming to stores for new appliances or supplies for home projects. Its rival, Home Depot, said it felt the effects of stimulus dollars as well, but spokesperson Sara Gorman said it was difficult to quantify the impact.

Walmart was uncertain enough to withdraw its financial outlook for the year, despite soaring first-quarter sales.

“We’ve had a solid start to May in the U.S., but we believe stimulus spending has been a big driver, which we don’t anticipate staying at these levels throughout the quarter,” Walmart Chief Financial Officer Brett Biggs said Tuesday on the company’s earnings call.

In addition, some of the stimulus spending may reflect urgent circumstances, which could indicate worse news on the horizon.

Over the past nine weeks, 38.6 million people have filed for unemployment insurance in the U.S., according to the Department of Labor. Other people have had their pay cut or benefits slashed. For some of these people, the stimulus checks were a lifeline, and they raced to the store to buy groceries, diapers or other necessities.

On top of unemployment benefits, eligible people have been claiming an additional $ 600 a week provided by the stimulus bill. But that benefit is set to end after July. While House Democrats passed another $ 3 trillion relief bill that would extend the payment through January 2021, Senate Majority Leader Mitch McConnell, R-Ky., said the next bill won’t extend that benefit, CNBC reported Thursday.

A customer exits the Apple Store on May 13, 2020 in Charleston, South Carolina. Customers had temperatures taken and were required to wear masks at the store.

According to research by the private nonprofit group National Bureau of Economic Research, households spent about 25 cents to 35 cents more for each stimulus dollar in the first 10 days after they received the payment. But after a week or two of higher spending, the researchers found that consumers had spent more than 40% of the money from the checks.

Scott Baker, co-author of the report and an associate professor of finance at Northwestern University, said the impact of the checks “die out pretty rapidly.”

“A couple weeks after receipt of the checks, most of that excess spending relative to people who didn’t get the checks seemed to disappear,” he said.

Some retailers didn’t mention any effect.

Macy’s, Kohl’s and L Brands, the parent company of Victoria’s Secret and Bath & Body Works, did not bring up stimulus-related spending when discussing first-quarter earnings (or, in the case of Macy’s, its preliminary results). These stores have only just begun to open back up. Most physical locations were fully closed as Americans started to receive their stimulus checks.

Some saved rather than spent

While discretionary spending did tick up after Americans received stimulus checks, a lot of the money got squirreled away, according to a study by Envestnet Yodlee. The firm found that across income brackets ranging from less than $ 35,000 to more than $ 150,000, about two-thirds of the stimulus money went into savings.

It’s too soon to tell where and when those savings funds will be spent, according to Baker, the Northwestern professor who co-authored the NBER research on stimulus spending.

A woman shops at a Fairway supermarket amid the coronavirus pandemic in New York, New York, on May 1, 2020.

“We’ll see to what extent spending kind of comes back. I think that’s the big question mark,” Baker said. “If there’s still a tremendous amount of people without jobs and spending needs a bit more of a kick-start, then maybe that will call for a bit more stimulus spending.”

Congress is in fact currently considering another round of stimulus payments to consumers as part of the $ 3 trillion proposal. But the NBER study suggests that a more targeted approach toward lower-income recipients could have a greater effect on the economy: Consumers who lost the greatest percentage of their income, and who had the least amount of savings, tended to spend more of their checks, the NBER study found.

In other words, those who could afford to save did.

“I think a lot of people, to the extent that they can, are trying to hoard cash basically because they’re just a bit uncertain about what’s going to be happening in the near and distant future,” Baker said.

— CNBC’s Amelia Lucas and Lauren Thomas contributed to this report.

WATCH: What it’s like being unemployed because of coronavirus