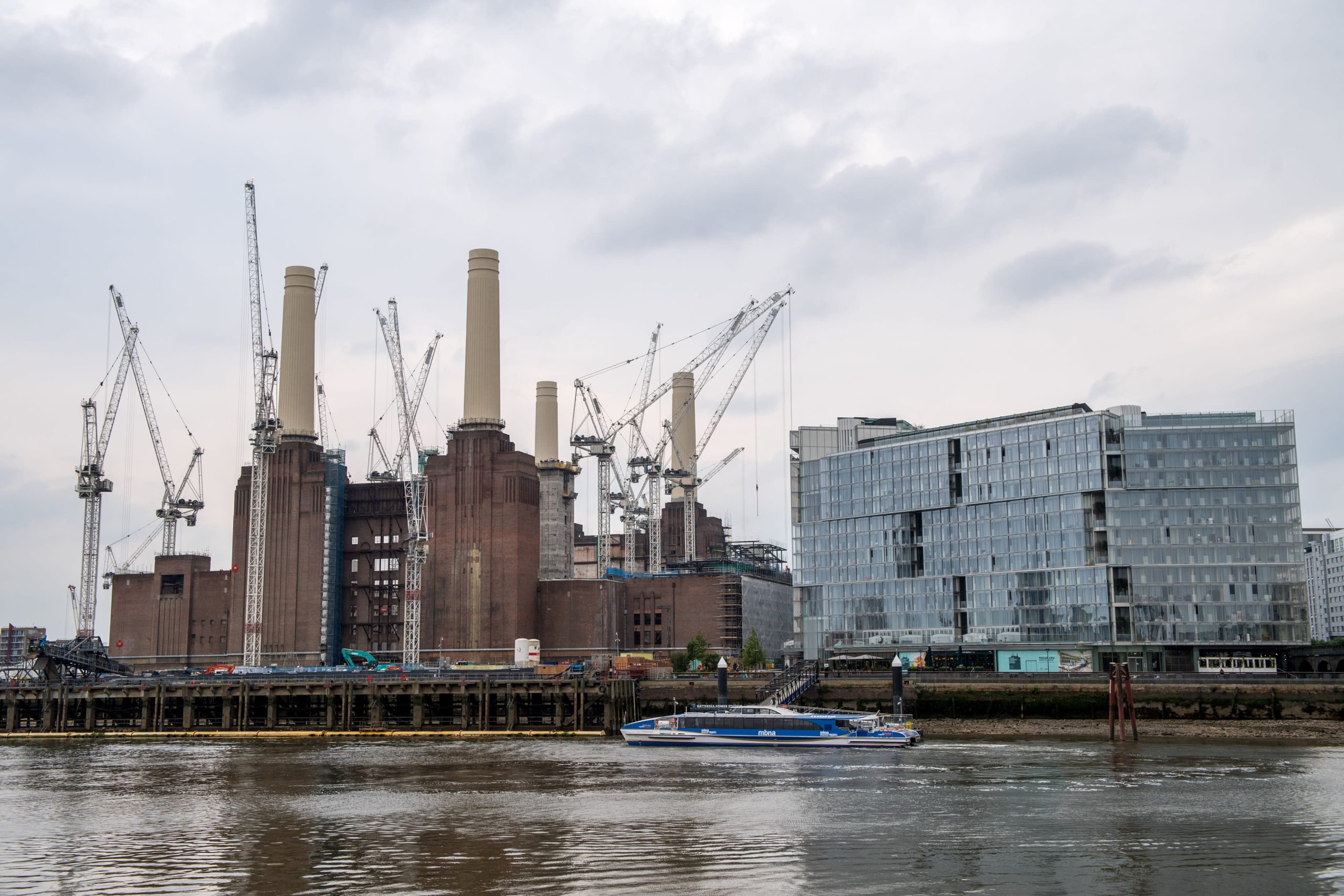 Scott House residential and commercial development, right, stands in the Circus West Village development next to Battersea Power Station office, retail and residential development in the Nine Elms district of London, U.K., on Wednesday, May 23, 2018. Traditional lenders are charging more for loans or declining to offer money at all after a boom in prime properties ended and left builders with a record number of homes without buyers.

Over the last decade, Silicon Valley has made a big push into London, opening huge new offices across the capital.

Facebook, Twitter, and Amazon have all acquired shiny multi-story buildings to accommodate their growing armies. But two of the biggest projects â€” the U.K. headquarters of Alphabet and Apple â€” are still underway, and now their future is uncertain.

The coronavirus has stalled construction projects worldwide and the lavish headquarters of Silicon Valley firms are no exception. The U.K. lockdown prevents people from leaving their homes unless it’s for a food run or a bit of exercise. As such, many construction companies have temporarily shut down building sites and laid off workers.

Building work at Google’s sprawling campus in King’s Cross was put on hold by Lendlease, the main contractor, when the lockdown was first announced on March 23.

The main feature of the Google site is an 11-storey “groundscraper.” Designed by the prestigious Heatherwick Studios and Bjarke Ingels Group, the building plans show a 25-meter swimming pool, a 200-meter rooftop running trail, and a large sports hall with views over London. It will accommodate up to 4,000 Googlers when it’s completed.

However, the company’s plan to turn the plot behind King’s Cross train station into its new U.K. headquarters is running several years behind schedule.

The Mountain View firm was initially hoping to be in the building by 2016, but a series of setbacks have pushed the move-in date back several years. The initial Â£1 billion ($ 1.2 billion) plans drawn up by Allford Hall Monaghan Morris were reportedly scrapped by Google cofounder Larry Page for being “too boring”.

A source familiar with the build, who did not want to be named due to the sensitive nature of the project, told CNBC that Google is now

There are several other Google buildings in the neighborhood at various stages of completion and Google eventually expects to employ 7,000 people in the area.

Elsewhere, the Alphabet-owned DeepMind AI lab is also facing delays on a new 11-storey building, with construction work put on hold indefinitely for the safety and wellbeing of all involved. DeepMind was due to move into the building â€” which boasts a library, lecture theater, and a roof garden â€” this year, but it’s unclear if this is going to happen.

Similarly, building work at Apple’s Battersea site in southwest London ceased when the lockdown was announced.

The iPhone maker is set to move 1,400 staff from multiple Apple offices around London into the new 500,000 square foot space, which will occupy six floors of the former coal power station (depicted on the front cover of Pink Floyd’s “Animals” album).

“We have concluded that, in light of the government requirements and guidelines, the site should remain closed for the next few weeks,” said Simon Murphy, the boss of Battersea Power Station Development Company, on March 31.

“In this period the only people working on site will be our security team and a skeleton staff undertaking essential maintenance. Offsite works and design activity will continue where possible to ensure we are in the best possible position when we restart on site.”

Apple initially hoped the office would be ready in 2021 but that date may also get pushed back.

Construction companies are keen to get back to work. Housebuilder Persimmon started sending workers back to sites on Monday, albeit with new safety protocols in place.