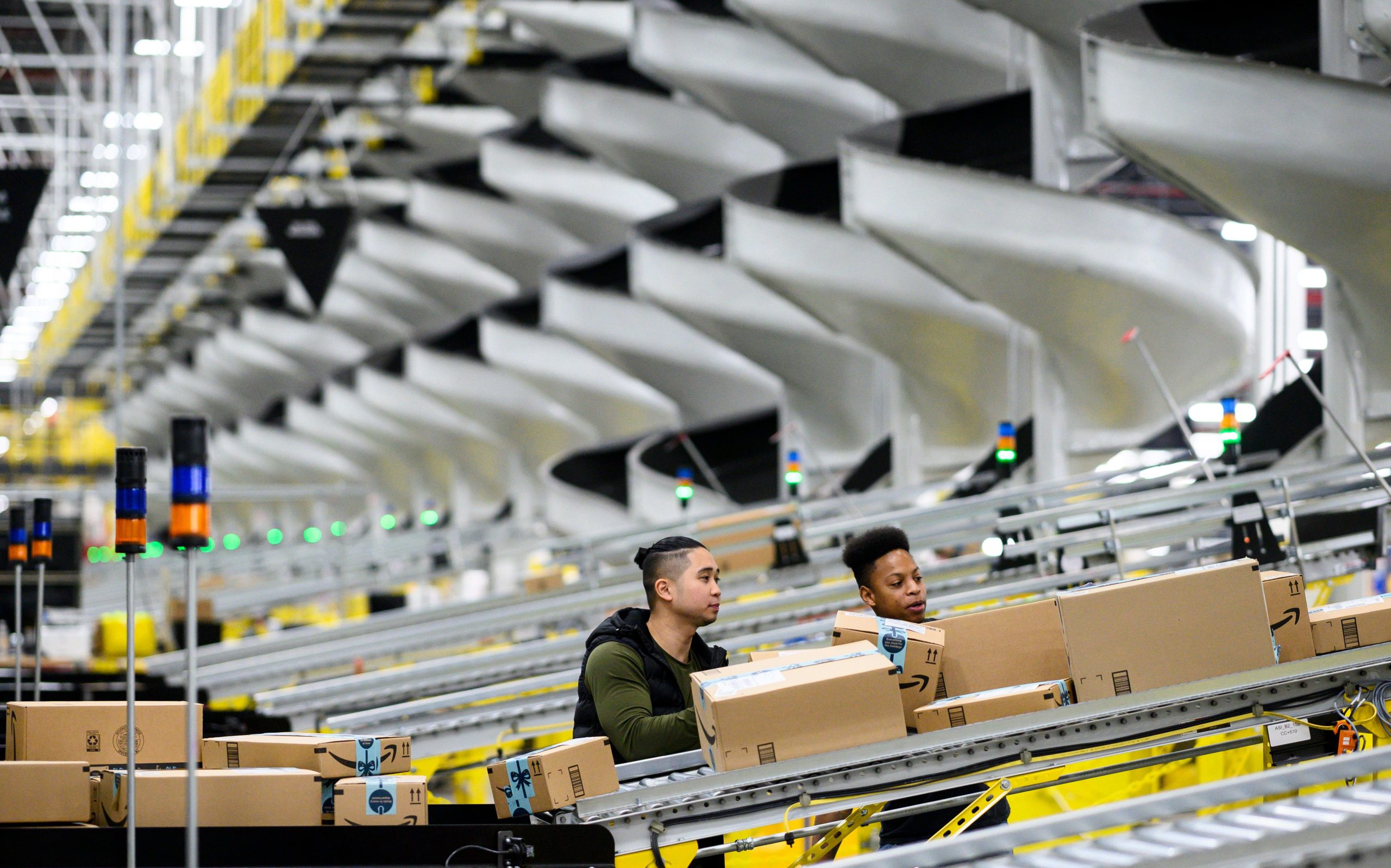 If Amazon dominated the retail market before the coronavirus pandemic began, there’s good reason to believe it’ll emerge from the crisis even stronger.

Under orders to stay home, millions of Americans have turned to online marketplaces like Amazon to order much-needed essentials like toilet paper, food, hand sanitizer and cold medicine. In lieu of neighborhood supermarkets, consumers are relying on online grocery delivery services like Amazon Fresh, resulting in a cascade of delays and out-of-stock notices amid the unexpected rise in demand. Amazon has hired more than 100,000 new warehouse and delivery workers since March to help manage the surge in orders, and it’s planning to bring on 75,000 more workers.

The unprecedented demand has propelled shares of Amazon to fresh highs. The stock hit an all-time high on April 16 and is up more than 28% for the year, compared with an 11% decline for the S&P 500. Investors have flocked to Amazon and other stay-at-home stocks like  Netflix and Zoom in recent months, as consumers have come to depend on their services amid the lockdown.

The outlook is brighter than ever for Amazon. But its ascent is occurring against a worrying backdrop of financial turmoil in the retail industry and the broader economy.

Brick-and-mortar stores that remain open face vanishing foot traffic, while other retailers across the U.S. have closed stores and furloughed thousands of employees. Smaller or non-essential businesses have also shut their doors and are hoping they’ll be able to stay afloat long enough to reopen.

Consumer spending has declined rapidly, with retail sales falling a record 8.7% in March. Many shoppers have limited themselves to making only essential purchases, while others are generally cautious about all purchases, having found themselves included in the 22 million Americans who filed for unemployment benefits in the last four weeks.

Retailers that shut their doors have continued to sell online, but it hasn’t translated to a surge in sales like that experienced by Amazon. A survey of nearly 100 digital retailers by CommerceNext, an e-commerce marketing and consulting firm, found 64.5% of businesses reported that e-commerce activity was down during the crisis.

Taken together, the retail industry’s troubles have generated concern about what the competitive landscape will look like when the pandemic subsides. Aside from Walmart, Target and Costco, will anyone else be left to compete with Amazon?

The short answer is yes. Major retailers who sell goods outside of apparel and furniture â€“ two of the hardest hit categories â€“ will likely weather the downturn, along with many direct-to-consumer brands that were doing well before the pandemic, said Andrew Lipsman, a principal analyst at eMarketer.

Instead of bulldozing the entire retail market, the pandemic is more likely to accelerate the decline of the “boring middle of retail,” such as Sears, J.C. Penney, Macy’s and Kohl’s, Lipsman said.

The days of department stores being a “one stop shop” for consumers are long gone. Now, their chances of rebounding after the pandemic have gotten slimmer, which raises the specter of bankruptcy, as well as a cash squeeze. Cowen analysts estimate that U.S. department stores have enough liquidity to last about five to eight months with extended store closures.

“A lot of what these businesses really needed to do was, when times were good, be able to invest some of those profits to make their businesses more relevant,” Lipsman said. “They’re not going to be able to make those investments now.”

In the meantime, Amazon has undoubtedly benefited from the coronavirus lockdowns that forced fellow retailers to close their businesses.

Amazon, already the nation’s second largest private employer, has offered to hire many of the retail workers who were put out of their jobs as a result of the crisis. In his letter to shareholders issued this week, Amazon CEO Jeff Bezos said the company has brought on unemployed workers from other industries, including a mechanic and a preschool teacher.

It comes as the company faces mounting labor concerns from its existing employees. Across the country, groups of warehouse and delivery workers, Prime Now shoppers and Whole Foods employees claim the company hasn’t done enough to protect them during the coronavirus outbreak. Some of their complaints about Amazon’s grueling working conditions predate the coronavirus pandemic.

Kate Scarpa, an Amazon spokeswoman, said the company is one of many others playing an essential role in the crisis, “while ensuring a safe work environment for employees.” Amazon has previously said it’s taken numerous steps to keep workers safe, including increasing deep cleanings at its facilities, providing workers with protective gear, as well as instituting temperature checks.

“We’re making regular, critical updates to our logistics, transportation, supply chain, purchasing, and other processes to ensure we can provide a vital service to people everywhere, especially to those, like the elderly, who are most vulnerable,” Scarpa added. “We know that people are depending on us.”

Many of Amazon’s millions of third-party sellers said they were angered by the company’s decision to prioritize essentials, such as household goods and medical supplies, last month, as they claimed it made existing supply chain issues worse. Some sellers were forced to cut costs extensively, while others furloughed or laid off employees.

While the decision may have helped consumers who were seeking out essential goods like toilet paper and disinfectant wipes, it may have also punished many sellers who rely on Fulfillment By Amazon to reach consumers.

Third-party merchants were still able to sell nonessential items on Amazon, but they weren’t able to ship those items using Fulfillment by Amazon, or FBA, which was reserved for essential items. The service lets sellers ship their products to an Amazon warehouse, where the company stores the inventory and ships orders out to customers, in exchange for Amazon taking a commission from each sale.

The decision “only further exposed the problems that come with a single company having this much power” over the consumer goods market, said Stacy Mitchell, a co-director of the Institute of the Institute for Local Self-Reliance.

“Amazon is making decisions that are in fact regulatory decisions,” Mitchell said. “They get to pick winners and losers and which goods are allowed to reach customers and which are not.”

Amazon disputed the characterization that it has outsized power in the retail industry, saying it competes in the worldwide market for retail sales, which includes both online and physical retailers. The company added that it represents less than 1% of global retail and less than 4% of U.S. retail.

It’s unclear whether the coronavirus outbreak will generate a lasting impact on the shopping habits of Americans. A recent survey conducted by RBC Capital Markets found that 55% of Americans had ordered groceries online and 60% of them used one of Amazon’s services to do it. Amazon may have found repeat customers from this new cohort, but they could also return to stocking up their pantry at their local store once the pandemic is over.

Instead, the coronavirus outbreak may end up serving as a teachable moment for consumers who found themselves with few retailers to choose from when shopping for groceries, paper towels or face masks. Guaranteed one-day and two-day delivery for Amazon products is hard to come by at the moment, which may dull some of the luster that Amazon had over rival online retailers pre-pandemic.

“I do think consumers are becoming much more aware of what dependence on a single company might be like,” Mitchell said. “We have lots of experience in the past with monopolies that started out as innovative, appealing companies for consumers that over time came back to bite us.”