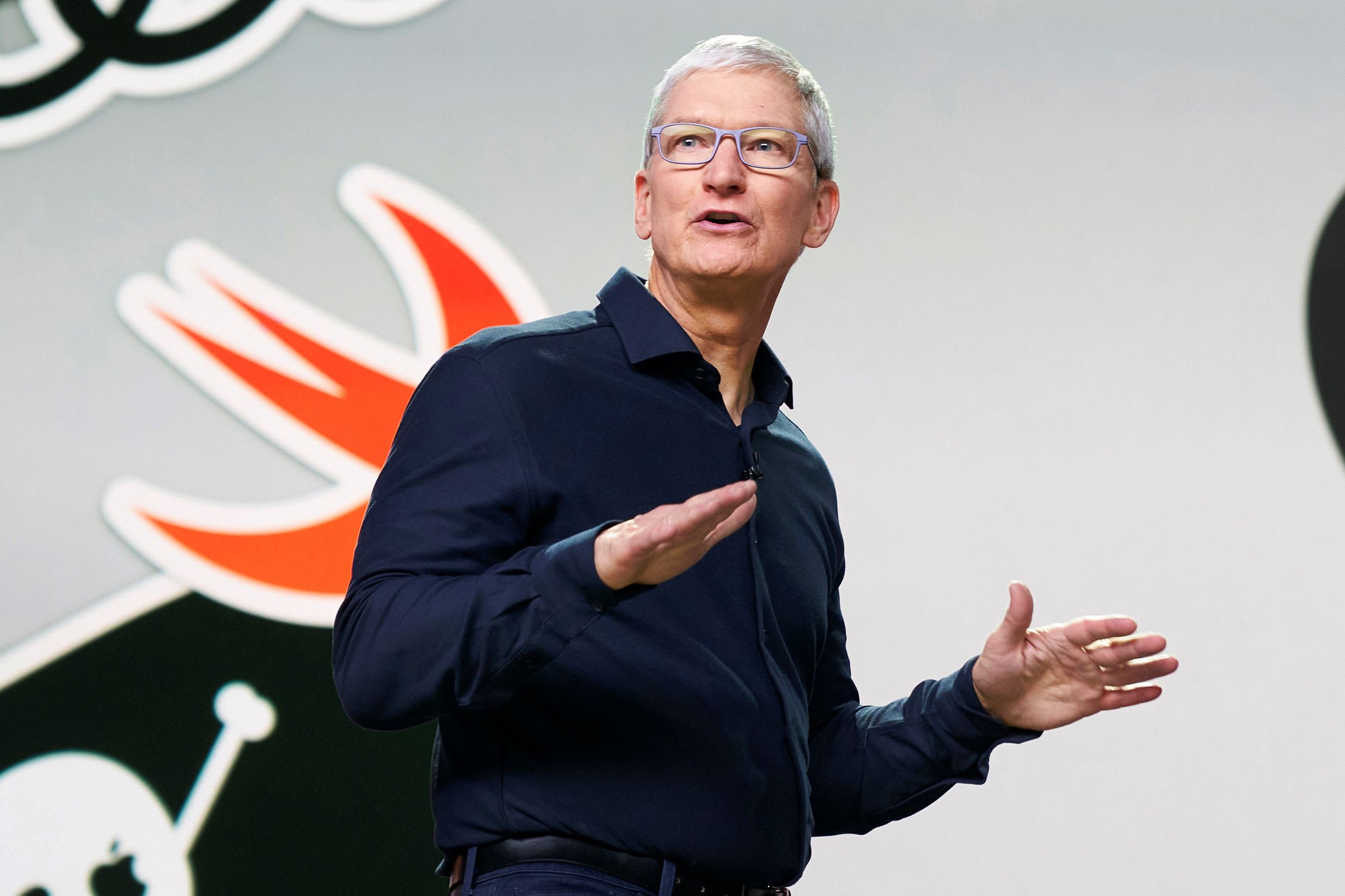 Apple announced new software for its iPhones, iPads, Macs, Apple TV and Apple Watch on Monday. It also said future Macs â€” including one that will launch later this year â€” will use chips made by Apple instead of Intel.

Apple said the transition from Intel will enable the company to offer faster performance on its laptops and desktops.

Apple also introduced iOS 14, the latest version of the iPhone software, which includes updates such as the ability to set a default mail app or browser app, a redesigned home screen, and new lightweight software programs called “App Clips.”

The new software was announced in a pre-recorded video filmed at Apple’s campus. Apple CEO Tim Cook acted as a master of ceremonies, briefly introducing Apple employees to present new features. Apple’s WWDC conference is being held remotely this year due to the Covid-19 pandemic. In recent years, Apple has gathered 6,000 developers in San Jose, California, but this year, it is distributing videos and setting up calls instead of an in-person conference.

Before the presentation started, Cook addressed the current protests against racism including a mention of Apple’s $ 100 million program to fight racial injustice.

Here’s everything Apple announced during its WWDC 2020 keynote.

The latest version of the iPhone operating system includes a big change to the iOS home screen, including the ability to set default email and browser apps for the first time.

In iOS 14, users can pin widgets with updating information on the home screen, Apple said on Monday, including calendar and maps mini-programs. Previously, users could only include apps on an iPhone’s home screen. Users can drag a widget onto the iPhone home screen, where it will persist. Users can add new widgets from a gallery that shows the ones they have installed. Apple also introduced a widget that uses artificial intelligence to predict which data the user wants to see.

iOS 14 includes a new feature called “App Library” that automatically organizes apps. Users can also delete entire pages of apps in one tap, or see similar apps, like all of the games from Apple Arcade, using App Library.

iOS 14 adds several new features to the Messages app, including mentions, new Memoji features including an avatar wearing a face mask, and a new interface for group texts that enables threads to be pinned to the top of the app.

Here’s what else is new:

Developers can download the new iOS this week, and a public beta will be released in July, Apple said.

Apple ditches Intel for its own chips

Future Macs will use Apple-designed chips, Apple said. Apple has been using Intel chips in its Macs for the last 15 years. Cook said it was a “huge leap forward.” Apple said it was designing its own chips specifically for the Mac to provide more performance while using less power.

Apple currently uses its own chips on its iPhones, iPads, Apple Watches, and Apple TVs, and said it had shipped over 2 billion chips so far. Macs with Apple’s own chips will be able to run iPhone and iPad software.

The transition will require software makers to update their software for compatibility.

Apple says that developers can get their new apps running in a “couple of days” and that there is a number of new software features that enable developers to easily port their apps. Apple said that Microsoft and Adobe are already updating their software, including Photoshop and Excel, to run on the new Macs.

“Everything developers need to build apps for these new chips is included in Xcode,'” Apple software SVP Craig Federighi said.

Users will be able to use apps that haven’t been updated through a new feature called Rosetta 2, which will provide backwards compatibility with Intel-based features. It will also support “virtual machines” that enable software makers to run Linux as an app inside MacOS.

Apple did not announce new consumer computers using its new chips, but will make a version of the Mac Mini with an Apple chip available to software developers.

Cook said that Apple will ship its first Macs with its own chips by the end of the year, and that Apple plans for the transition to take about two years.

An iPhone with the Translate app can be put in between two people speaking different languages and can translate what they are saying in real time.

iOS 14 (and iOS 13) will allow you to unlock certain cars with your iPhone.

Apple announced new updates to CarPlay, its software that enables an iPhone to pair with a supported head unit so users can control their iPhone while driving.

The biggest update is digital car keys in iOS 14 and iOS 13, which enables users to unlock and start their car from their phone. The first supported car is the 2021 BMW 5-series, which will be released next month, Apple said.

The keys can be shared through an iMessage, and users can deactivate keys remotely through iCloud.

iOS 14 will let you share your digital car key with others (on cars that will support it.)

Apple said it was working on standards with industry groups to bring the feature to more cars, and expects to see a new standard using Apple’s ultra-wideband chip next year.

Apple introduced a new lightweight form of software it calls App Clips that can be launched through the web or a text messages. App Clips are less than 10 megabytes in size.

Users can tap an NFC-tile or scan a QR-code like image to pull up an App Clip at participating business. Users can sign into an App Clip using Apple’s sign-in method and pay through Apple Pay.

Apple addressed privacy changes in the app store, too. Apple introduced a new “nutrition label” for apps that summarizes an app’s privacy policy. It will be displayed on App Store pages, Apple said.

Apple said that 200 million accounts had been created using Apple’s Sign In With Apple feature introduced last fall that allows users to sign into web services using an Apple account.

Many Apple-developed iPad apps, including Photos, Music and Notes, have gotten iPad user interface updates with side bars and tool bars, Apple said on Monday.

Photos in iPadOS 14 has a new sidebar for moving between photo albums.

Apple’s Siri feature is now included in a little button on the bottom right corner in the newest version of iOS 14. Apple also redesigned its search feature to look more like the search function on a Mac desktop.

Scribble lets you write in search fields with an Apple Pencil and your iPad will convert it to text.

Apple announced new improvements to its iPad stylus, called Pencil. The Pencil can now be used to input text all over the iPad user interface, a feature Apple calls Scribble. For example, users can write directly in the Safari URL bar, which is automatically converted into text. If users scratch something out using the Pencil, it will be deleted.

Apple said that its wireless earbuds, AirPods, will now automatically switch from your iPhone to your computer when needed. Currently, a user needs to open the Bluetooth settings to switch to AirPods if they move between Apple devices.

AirPods will auto-switch between your devices.

AirPods Pro will also support virtual surround sound, like at a movie theater, by measuring whether your head or device is moving.

AirPods Pro will get a new surround-sounds spatial audio experience.

The latest version of the Apple Watch software can track user sleep patterns using a machine learning model that senses motion at night. It includes a feature to nudge users to go to bed and new alarm features to gently wake users up.

Sleep data will be graphed and analyzed inside the Apple Health app.

Apple also added several new “complications” to its Apple Watch software, which enable features to be displayed directly on a watch’s interface. Apple renamed its Workout watch app to Fitness, and added dancing as a new workout feature.

The newest version of Apple Watch software will enable users to share their watch face. Developers can offer pre-configured faces their their apps.

WatchOS 7 will have a timer that helps you wash your hands long enough.

Apple Home cameras will be able to identify people you know and will alert you on your Apple TV if they’re at the door.

Apple redesigned its Home app that controls smart home accessories like smart bulbs, smart locks, and cameras. It includes a new adaptive lighting feature that automatically controls the color and warmth of lighting inside the home.

Apple’s set-top box, the Apple TV, is getting a software update that includes support for multiple-users and additional controller support for games. The latest version of the Apple TV can also display picture-in-picture, if you need to, for example, monitor financial news while watching a workout video.

The new notification center can be accessed by clicking on the time in the upper right corner, which includes widgets and toggles for sound, brightness, and wireless connectivity.

Last year, Apple introduced Catalyst, a new software that enables app makers to more easily port iPhone and iPad apps to the Mac. It got several improvements this year, Apple said, including the ability to write an app that takes over the full Mac desktop.

Apple will also offer a marketplace for Safari extensions as part of the Mac App Store. Safari’s start page and tabs have also been redesigned, and it can translate websites automatically.

The newest version of Safari will also display a privacy report for websites including which trackers are running.

“We love the Mac, it’s the tool we use to make all the products we put out into the world,” Apple designer Alan Dye said in a videotaped demo.

The public beta of macOS Big Sur launches in July.

Correction: A previous version of an Apple News headline for this story was incorrect. Apple announced new software updates for the Apple Watch, not new Apple Watch hardware.