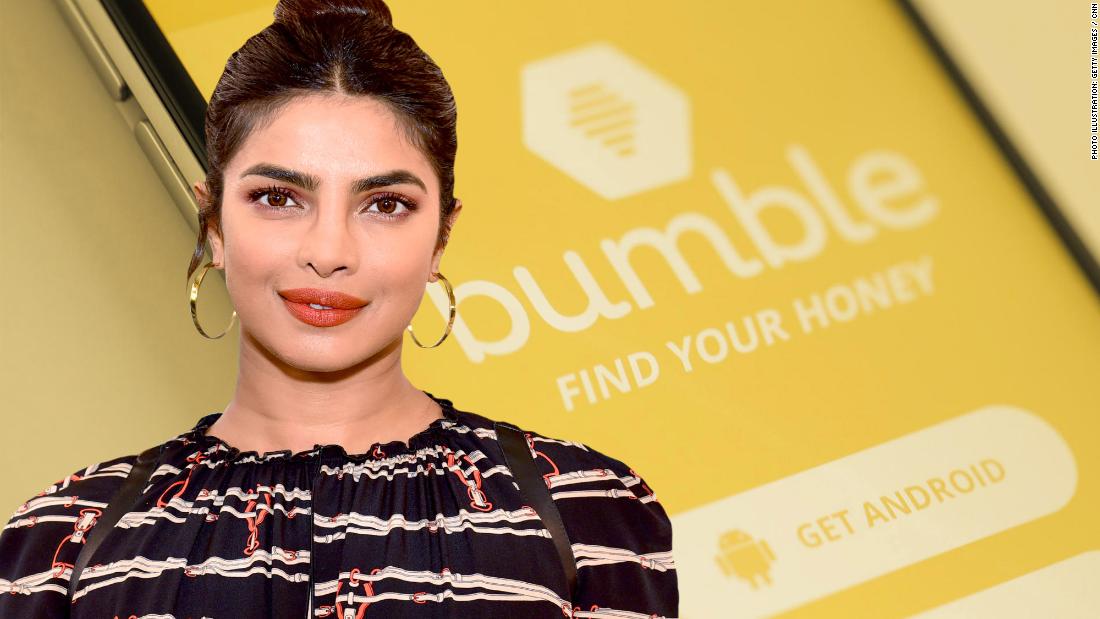 Bumble, which requires women to make the first move, announced Wednesday plans to launch in India later this year. Indian celebrity Priyanka Chopra, a new investor in the company, will advise on the expansion.
The news comes less than a week after rival Tinder launched a My Move feature in India that gives women the option to prevent men from initiating a conversation.
But Bumble’s efforts for an expansion in India have been in the works for awhile. Founder and CEO Whitney Wolfe Herd said the newly engaged Chopra first told her “Indian women needed Bumble” months ago. Chopra was among a group of high-profile women who helped Bumble kickoff its networking app, Bumble Bizz, in October 2017.
“It was clear then we shared a passion for empowering young women on a global level,” Wolfe Herd told CNN in an e-mail. “From there we began architecting a plan to partner and launch Bumble in India.”
Wolfe Herd said the challenge in entering the Indian market is “localizing the experience and attracting women” â€” an area in which Chopra will help.
Chopra’s manager, Anjula Acharia, is also an investor and adviser. Acharia helped Chopra â€” who was already established in India â€” reach fame in the United States. But Acharia has a long history of crossover efforts. She was instrumental in introducing artists such as Britney Spears and Lady Gaga to India â€” a background that could translate to Acharia helping Bumble resonate with the local audience.
Bumble’s local app will be in both Hindi and Hinglish â€” a hybrid between Hindi and English â€” and available on iOS and Android. It will also roll out new safety features before entering the region, which has a reputation for violence against women. In June, India was named the most dangerous country in the world to be a woman.
Wolfe Herd said it will only require Indian women to provide the first initial of their name â€” no first or last names â€” and provide new ways to report “bad behavior” in the app.
Bumble already has photo verification features and more than 4,000 content moderators who review photos and profiles.
Before Bumble, Wolfe Herd was an early employee and exec at Tinder but left the company in 2014 after suing for sexual harassment and discrimination. The case was eventually settled.
But tension between the two dating companies has become increasingly palpable as a result of very public litigation between the Bumble and Match Group, Tinder’s parent company.
In March, Match Group targeted Bumble with a lawsuit accusing the company of patent infringement and stealing trade secrets. Bumble asked the court last week to dismiss the case.
Separately, Bumble filed a counter lawsuit against Match Group. Bumble argues that Match Group is using litigation as revenge over failed acquisition talks. Both lawsuits are ongoing.
While Bumble already operates in over 160 countries, India is a significant market because of its size. According to a report from Bain & Co, India has 390 million internet users, the second largest of any country behind China.