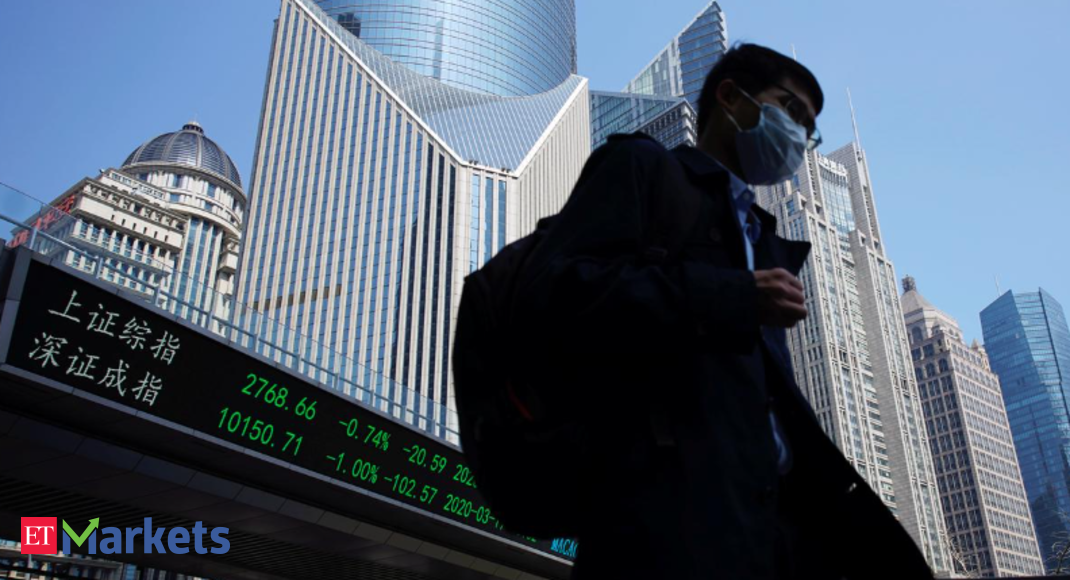 SINGAPORE/WASHINGTON: Asian stocks eased from a two-year high on Wednesday, as a mixed bag of economic data had investors a touch more circumspect about the global recovery, while oil jumped to a five-month peak owing to a hurricane disrupting output in the Gulf of Mexico.

MSCI‘s broadest index of Asia-Pacific shares outside Japan edged down 0.1% after hitting its highest since mid-2018 on Tuesday. Japan’s Nikkei was off 0.1%.

The U.S. dollar nursed small losses in currency trading, though moves were muted ahead of a key Thursday speech from Federal Reserve Chairman Jerome Powell in which he is expected to outline the central bank’s next steps.

A day ago, investors had been cheered by signs of progress – or at least the lack of deterioration – in Sino-U.S. trade relations. But as company earnings season wraps up, and focus comes back to economic data, the outlook is turning murkier.

Consumer confidence dropped to a more than six-year low in the United States this month, data showed on Tuesday, overshadowing a boom in new home sales.

“If you look at the macro numbers, a lot of the improvement in Q2 seems to be slowing down in momentum,” said Tai Hui, Hong Kong-based J.P. Morgan Asset Management’s chief market strategist in Asia.

“Central banks and governments are not really announcing anything new, and so markets are in a bit of a sideways move at this point in time.”

In commodity markets oil prices hung on to overnight gains as U.S. producers closed offshore output and battened down as Hurricane Laura drives toward the Gulf coast.

Producers evacuated 310 offshore facilities and shut 1.56 million barrels per day of crude output, 84% of Gulf of Mexico’s offshore production – near the 90% outage that Hurricane Katrina brought 15 years ago.

Brent crude futures sat by a five-month high touched on Tuesday at $ 45.95 a barrel and U.S. crude futures likewise held steady at $ 43.31 a barrel, though analysts believe the lift is temporary.

“As Hurricane Laura fades, oil markets will once again return to the grim reality of challenging demand growth and significant excess capacity,” said Commonwealth Bank of Australia analyst Vivek Dhar in a note. “While global oil demand is expected to trend higher from here, total oil consumption isn’t expected to return to pre-COVID levels until 2022.”

WAITING FOR JAY
With a light data calendar for the rest of the day, currency and bond markets are firmly focused on Powell’s Thursday speech.

Stronger-than-expected business sentiment in a German survey on Tuesday had again underpinned the euro by buttressing markets’ belief that the continent can bounce back from the coronavirus faster than the United States.

The common currency last sat at $ 1.1824, but risks to the downside abound thanks to stretched positioning and the possibility that Powell does not sound as dovish as investors expect – particularly on the issue of inflation targeting.

“Dovish expectations seem to be quite loaded for this event, and the dollar may bounce if Powell disappoints the doves,” said OCBC Bank currency strategist Terence Wu.

Overnight, investors had lapped up $ 50 billion of two-year U.S. Treasuries at auction but the long end of the yield curve steepened as some prepared for the prospect of higher inflation.

The yield on benchmark 10-year U.S. government debt crept higher from the New York close during the Asia session to sit at 0.6949% and the move weighed on the yen as the better returns tend to attract Japanese investors.