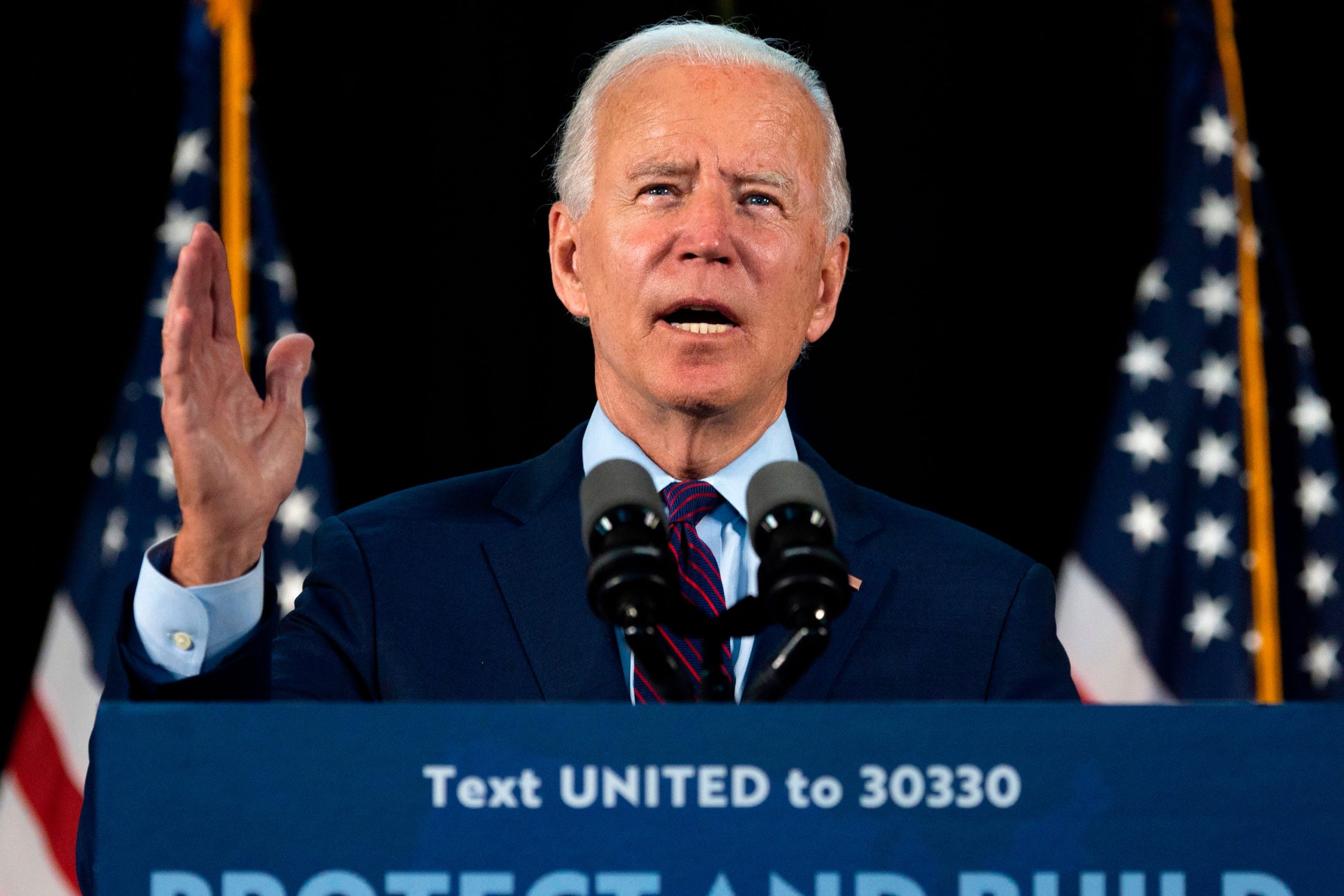 Democratic presidential candidate Joe Biden delivers remarks after meeting with Pennsylvania families who have benefited from the Affordable Care Act on June 25, 2020 in Lancaster, Pennsylvania.

Finance executives are now bracing for Joe Biden to potentially win the presidency as Donald Trump slides in national and swing-state polls.

Various current and former Wall Street financiers, analysts, lobbyists, lawyers and political advisors with banking clients spoke to CNBC about how the industry is bracing for a possible Biden win. Some spoke on the record, others decided to discuss on the condition of anonymity as they were not authorized to speak publicly on the issue.

The changes in tone and expectation â€“ and, in some cases, preparation for a Biden presidency â€“ represent an about-face for many executives who privately cheered on Trump’s cuts in corporate and income taxes, along with his rollback of regulations. Many of them have traditionally projected more moderate leanings in public settings.

Michael Novogratz, an investor and philanthropist, said he has noticed a change from many of his wealthy finance friends who were convinced that Trump would win because, at the time, the economy was humming and the market was consistently soaring. Since the start of the coronavirus pandemic, millions of people in America were forced into unemployment, and the market, while it recovered from its steepest losses, remains in flux.

“Five months ago I had a dinner with 10 of the best investors. I was the only guy that thought Biden would win. Eight were for Trump, one undecided and one Biden supporter,” Novogratz said Thursday. “I think if you polled that group today it would be a 50 to 50 split or 60 to 40 for Biden.”

The preparation for a Biden presidency ranges from privately warning clients and affluent friends that their taxes will soon be going up, to veteran executives speaking to people linked to Biden out of hopes they can have access to the White House. Others are donating more to Biden’s campaign.

A Wall Street bundler with ties to former President Barack Obama and Democratic nominee Hillary Clinton, has recently noticed a surge in calls being returned by uncommitted finance executives to now give to Biden. This person has also pitched donors that if they donate, they may have a better chance at seeing their philanthropic initiatives supported by a Biden administration.

A lobbyist told CNBC that he estimates over 50% of his Wall Street clients are convinced Biden is going to beat Trump. A Republican political operative, whose clients include financial investment firms and big tech companies, said that in private meetings, finance executives are starting to believe Biden will overtake Trump. This operative also said they hope Biden will not raise corporate taxes until the economy stabilizes in the wake of Covid-19.

Jonathan Hartley, a former associate at Goldman Sachs and a consultant for the World Bank, affirmed that higher taxes are a predominant concern on Wall Street.

“Taxes across the board [are] definitely at the very top of [the] mind given Biden’s improvements in polling,” Hartley said.

Signum Global, a financial advisory firm led by former Evercore chair Charles Myers, have told clients that not only will Biden win, but that the Senate is going to flip to the Democrats. The group has also been clear that it believes taxes across most industries are going up.

A corporate restructuring attorney, who represents a variety of Wall Street firms, says that in recent conversations with CEOs and leaders of of various funds, they believe Biden is going to win but Republicans will maintain the Senate. The hope is, this attorney says, that there will be a GOP backstop to prevent Biden from embracing more left-leaning economic policies.

Biden leads Trump by about 10 points in a Real Clear Average of national polls. The former vice president also has opened up leads in swing states such as Wisconsin, Pennsylvania, Florida and Michigan, all of which Trump won in 2016.

Yet despite a historically catastrophic downturn due to the coronavirus, Trump maintains polling leads over Biden on the economy. A recent Wall Street Journal/NBC News polls showed that 54% of independent voters said they trusted Trump to handle the economy but a plurality of 45% to 35% of the independents surveyed said they still plan to vote for Biden anyway. CNBC’s June poll shows that Trump is still favored over Biden on the handling of the economy.

Biden has said he would raise the corporate tax rate to 28% from 21%, where it stands now after the Trump tax bill reduced the rate from the mid-30% level. Households making over $ 400,000 would also see tax increases. The nonpartisan Tax Policy Center has said Biden’s tax plan would raise $ 4 trillion in revenue over the next decade.

Some market analysts have noted that the recent slump in the markets could be due to Biden pushing ahead of Trump in the polls, possibly leaving investors skittish about the future of the economy under a potential Biden presidency.

“Joe Biden would be a disaster for the economy and everyone knows it,” said Tim Murtaugh, Trump campaign spokesman. “Higher taxes and the massive regulations of the Green New Deal would kill any chance of an economic recovery from the coronavirus.”

The Biden campaign didn’t respond to a request for comment.

Some on Wall Street are slowly changing their bets to Biden, despite their financial successes under the Trump administration, is the president’s handling of the coronavirus. Trump has come under scrutiny and withering criticism by lawmakers and activists for being what they see as either too slow to react to the pandemic or for not doing enough to help states.

Finance executives have become infuriated watching what they believe is the U.S. struggling to overcome the pandemic while their political and business allies in Europe have had more success in combating the virus. Data cited by The Hill shows that there are now close to 30,000 new cases per day in the United States while in the European Union there are close to 3,000 cases each day.

“It’s an article of faith among Wall Streeter’s to know that the U.S. is structurally superior to Europe. Watching Europe outperform us on Covid-19 burns them,” said an analyst at an asset management firm.

Robert Wolf, the founder of 32 Advisors, a holding company which includes the direct investing arm 32 Ventures, told CNBC that since the coronavirus started spreading through the U.S., he’s been emailing close to 175 influential people, including CEOs and politicians, giving his take on the pandemic, markets, the election â€“ and how he sees Biden standing above Trump.

Wolf is a former CEO of UBS Americas, previously an advisor to Obama and a current Biden supporter. He wrote to his email list just after Memorial Day that taxes were going to be raised under Biden, but he justified the idea because, as he puts it, fighting the coronavirus is the equivalent to how a government goes to war. Taxing the rich, then, is a necessary decision, according to Wolf.

“Everyone must do their part. Our medical professionals, front line workers, first responders and business owners who were forced to close their shops have certainly done so,” Wolf said in a email titled “War & Taxes.” “We will need the wealthy and high income earners to do their part financially, as they’ve done following previous wars,” the email said.

The growing confidence in Biden within the industry follows what has been a strong 2020 fundraising election cycle for the Democrat. Money is flowing into his campaign and other efforts from all corners of the business community, including from Wall Street financiers.

Biden and groups supporting him are outraising Trump from donors in the securities and investment industry, according to the nonpartisan Center for Responsive Politics [CRP]. This isn’t necessarily a tell that Biden will win. While Obama raised more from the securities industry than his rival, John McCain, in 2008, Mitt Romney in 2012 and Clinton in 2016 enjoyed similar advantages in their losing campaigns.

The data, which includes all the verified contributions through April, shows that Biden and external committees backing him have raised $ 29 million through those who work in financial firms. Meanwhile, Trump and his outside supportive organizations have brought in $ 7 million.

Pro-Biden financial executives include a few at Bain Capital, a firm that was founded by Romney and specializes in private equity, venture capital and other businesses. In 2016, 17% of the contributions from that firm went to Republican congressional candidates, the data from CRP shows. This cycle so far, only 4% have gone to the GOP.

That strength Biden has with small- and big-money donors will likely even pay off more in June. People familiar with his efforts say that the former vice president and the DNC could combine to raise $ 100 million by the end of the month.