Latest News
Home /The threat of a laptop ban resurfaces 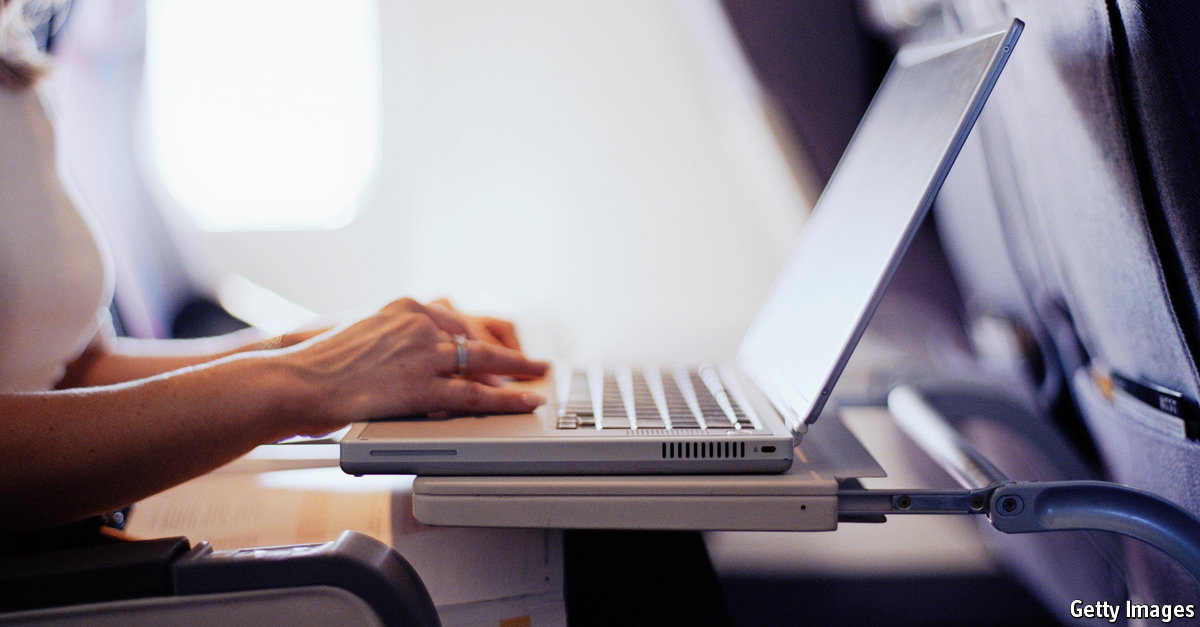 MODERN air travel has become less tolerable in many ways. Seats are narrower, legroom more cramped and luggage space elusive. But in one way it has vastly improved. Keeping yourself amused on a flight once meant squinting at a flickering movie on a distant screen. Today flyers can travel with a library of films, music and books on a small electronic device. On-board Wi-Fi also means business folk can work uninterrupted.Â

That may change. On May 28th, John Kelly, Americaâ€™s homeland security secretary, said that the country was considering extending a ban on large electronic devices in cabins to cover all international flights to and from the country. Currently only passengers on planes taking off from eight mostly-Muslim countries are forced to place their laptops, tablets and the like into the hold.Â

The idea has not come out of the blue. Officials have hinted for months that they were considering introducing such a ban. Earlier this month it seemed certain that restrictions on flights between Europe and America would be imposed, only for the threat to be lifted following a meeting between security officials from both sides of the pond. Intelligence agencies are worried that a terrorist might try to down a commercial jet using a bomb concealed in a consumer device placed against a weak point in the cabin wall. (Hence, if such explosives did get past security officials, it would be safer for them to be in the hold.) Terrorists are â€œobsessedâ€ with the idea of knocking an airliner full of Americans out of the skies, Mr Kelly told Fox News.Â

There is no indication of whether restrictions are imminent or merely under consideration. IATA, the main international-airline association, hopes they can be averted, by increasing scrutiny of cabin luggage and employing better bomb-detecting technology. In the circumstances, IATA officials believe, passengers would be sanguine about the longer security lines that would result from this.

Airlines would no doubt prefer that too. Over 200m passengers flew on international flights to or from America in the 12 months to June 2016, according to the Department of Transportâ€™s latest figures. No one knows how many passengers would be put off by the prospect of flying device-free. Carriers, though, worry that lucrative business travellers, who rely on being productive while in the air, would prove the most reluctant. That would be bad for profits. On transatlantic flights, for example, business- and first-class passengers account for 13% of airlinesâ€™ capacity, but half the revenue. Even if executives were willing to forgo their spreadsheets for detective novels, they are often forbidden to put company computers in the hold for fear of theft or loss of sensitive information, notes Chris Barratt of Avsec, an aviation-security consultancy. A monthly trip to London might become a once-a-quarter one, worries the Business Travel Coalition, a lobby group.Â

Airlines would probably seek ways around a ban. Qatar Airways, for example, has been lending business-class passengers laptops during flights since the restrictions on Middle Eastern flights were introduced. Perhaps the best hope is that in time executives will learn to live with this ban just as they have with the 11-year-old one on liquids, says Jason Geall of American Express GBT, a corporate-travel booker. Perhaps. But mouthwash is not as crucial for productivity as a laptop. Airlinesâ€™ loss might be Skypeâ€™s gain.Â