Latest News
Home /It pays to stay unemployed. That might be a good thing 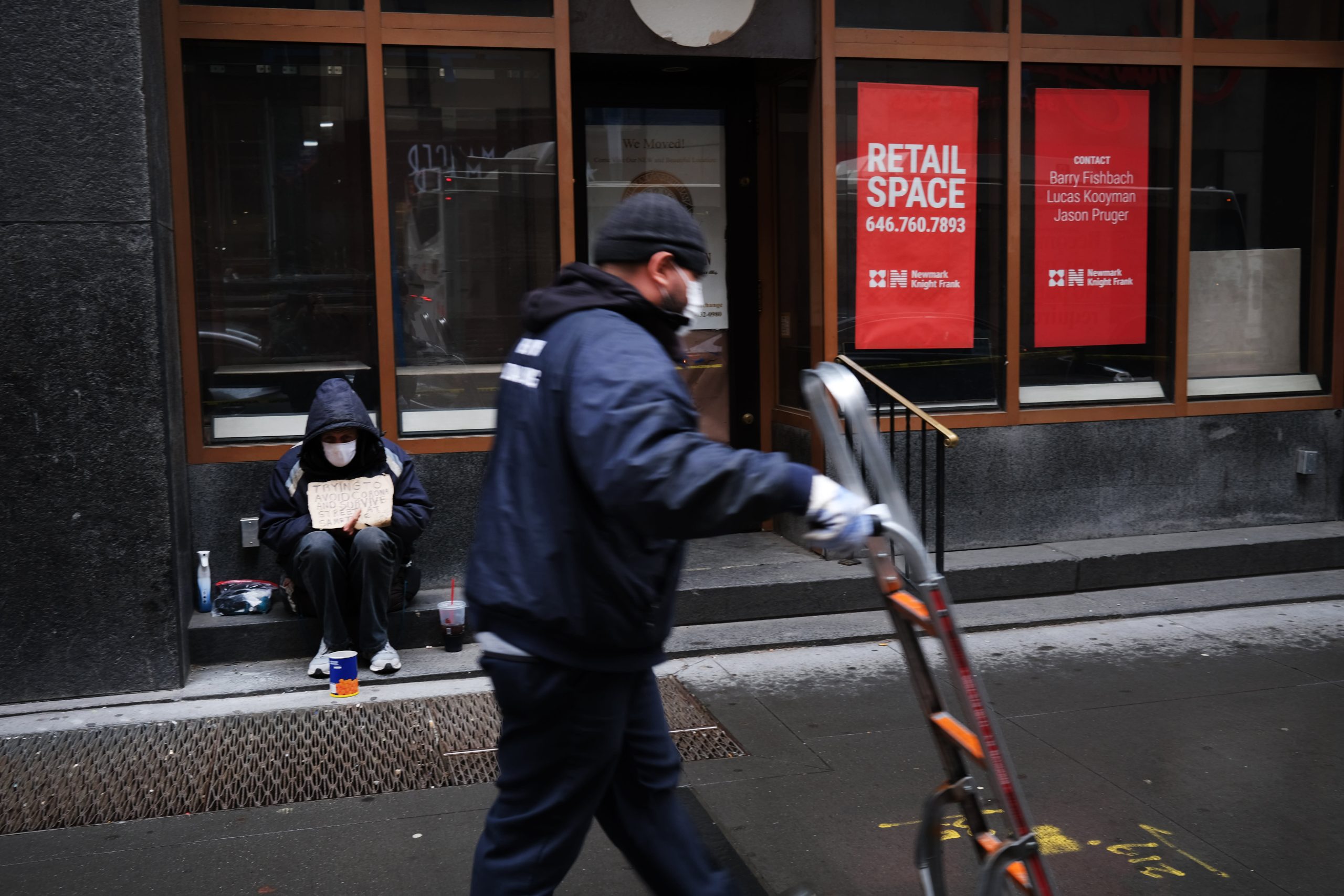 People walk along Broadway as the coronavirus keeps financial markets and businesses mostly closed on May 08, 2020 in New York City. The Bureau of Labor Statistics announced on Friday that the US economy lost 20.5 million jobs in April. This is the largest decline in jobs since the government began tracking the data in 1939. (Photo by Spencer Platt/Getty Images)

Americans have lost jobs by the millions as the coronavirus pandemic continues to bludgeon the U.S. economy.

However, many jobless workers stand to reap a financial benefit from their layoffs.

Some could more than double their prior salaries.

The distortion results from the $ 2.2 trillion economic relief bill enacted in March, which boosted jobless benefits to a level unseen since the unemployment insurance program was created in the 1930s.

Around 40% of all workers could theoretically earn more while unemployed than going back to work, according to an analysis by Noah Williams, director of the Center for Research on the Wisconsin Economy at the University of Wisconsin-Madison.

Critics say the policy serves as a disincentive to return to work as states start re-opening their economies â€” in turn limiting the country’s economic rebound, according to critics.

Labor economists generally agree the situation isn’t ideal. However, it’s necessary given the extraordinary health and economic crises at hand, they said.

“This is definitely a second- or third-best solution to a very serious problem,” said Stephen Wandner, senior fellow at the National Academy of Social Insurance. “But I’m not sure they had a much better way of dealing with this.”

The relief law, known as the CARES Act, enhanced unemployment benefits in several ways. It boosted weekly benefits, increased their duration and extended jobless pay to previously ineligible groups like the self-employed.

The law offered an extra $ 600 per week, funded by the federal government, to unemployment recipients.

That infusion supplements the unemployment benefits typically doled out by a worker’s state. While unemployment insurance is a joint federal-state program, states control key aspects like benefit levels and vary significantly in generosity.

The average worker in more than half of states stands to collect more from unemployment than from their prior job, according to an analysis conducted by Ernie Tedeschi, an economist at Evercore ISI.

These dynamics are largely a function of a state’s wages and unemployment generosity.

Generally, the lower the wages and the greater the unemployment benefits in a state, the more it pays to be unemployed. (This, of course, doesn’t account for the negative effects of long-term unemployment such as suppressed wages or benefits like health insurance that an employer may offer.)

More from Personal Finance
Can’t pay your rent? Here’s what you should do
Unemployment just hit 14.7% yet the market is way up
Families of dead Covid-19 victims may have to give back stimulus checks

States cap their maximum weekly unemployment pay, meaning the financial benefits of unemployment dissipate after a certain point for those making higher salaries.

Take the accommodation and food services industry, for example.

This industry category includes restaurant and hotel workers â€” among the worst-hit sectors of the U.S. economy as state lockdown orders led to mass layoffs in the hospitality sector.

The average worker in this industry, which employs 14 million people, makes $ 13.45 an hour â€” the lowest compared with other industries.

These workers would benefit most under the unemployment system when compared to others â€” collecting 182% of their previous wages, according to a CNBC analysis of Bureau of Labor Statistics and Labor Department data.

The dynamic could be especially lucrative for the typical fast-food worker, who would collect 219% of prior pay from unemployment, among the occupations that stands to benefit most.

That wage replacement rate means the average worker would earn more than twice as much as from their regular job, which pays just $ 11 an hour.

In normal times, state unemployment benefits replace less than half of prior wages for out-of-work Americans. That’s meant to incentivize individuals to find a new job and provide financial support until they do.

That makes sense when U.S. and state officials are urging people to stay home, forcing businesses to close and preventing huge swaths of people from looking for work, economists said.

Workers in New Mexico, for example, would replace 129% of their prior salaries on average from unemployment â€” the largest “wage replacement rate” among any state.

In Kansas and Montana, more than half their respective state workforces could make more on unemployment than by working â€“ the largest shares of any other states, according to Williams.

“I think it’s a good compromise with the situation we’re in,” Jesse Rothstein, director of the Institute for Research on Labor and Employment at the University of California, Berkeley, and former chief economist of the U.S. Department of Labor, said of the $ 600 payments.

“We needed to support families, and dramatically scale up the amount of benefits,” he added. “It would have been much, much worse without something like this.”

Absent a significant infusion, the economy would have suffered from even greater spending pullbacks as more people curtailed purchases and delayed rent payments to make ends meet, economists said.

“Giving extra income payments to people who make less than $ 20 an hour is pretty much getting money in the hands of people who need it to pay utility bills, buy groceries, and help [the economy] right now,” said Betsey Stevenson, a professor of economics and public policy at the University of Michigan.

That was the case for one Amazon warehouse worker in Kentucky.

The worker, who wished to remain anonymous for fear of company reprisal, has been collecting unemployment benefits in the state since the end of April after the warehouse temporarily closed.

The individual makes nearly double his typical pay from a 40-hour work week pre-pandemic â€” $ 1,150 a week from unemployment benefits compared with $ 600 a week from a $ 15-an-hour wage. (The company recently instituted a $ 2-per-hour temporary raise and increased overtime pay from 1.5 times to 2 times hourly pay, the worker said.)

This is definitely a second- or third-best solution to a very serious problem. But I’m not sure they had a much better way of dealing with this.

senior fellow at the National Academy of Social Insurance

The worker’s warehouse has since re-opened, but the individual plans to take unpaid time off and collect unemployment benefits through July due to a risk of contracting the Covid-19 by returning to work â€” an especially fraught idea given that the worker is caring for high-risk family members due to health conditions.

The $ 600-a-week additional payments are a “relief,” the person said.

“It eased financial strains in an already strained situation,” the worker said. “The [state benefit] would’ve kept the four walls up and everything else on. But it would be tight.”

Absent the $ 600-a-week payments, the worker would still opt to collect unemployment due to health concerns.

The beefed-up unemployment benefits was also an issue of expediency. State unemployment systems are clunky and outdated even in the best of times, economists said. Instating a more-complicated formula would have delayed benefits for months â€“ a potentially devastating outcome for families in dire straits, they said.

However, some critics believe taking additional time to ensure workers couldn’t make more from the unemployment system than their previous job would have been worthwhile, even if it resulted in delays.

“I understand it could have added a little time,” said Rachel Greszler, a research fellow at the Heritage Foundation, a conservative think tank. “But I don’t think it’s a good argument for incentivizing unemployment.”

The Heritage Foundation believes the CARES Act enhanced benefits could increase unemployment by nearly 14 million people and reduce U.S. gross domestic product by up to $ 1.49 trillion.

The $ 600 weekly payments are ending after July 31, however, after which point Congress would have to extend them. Economists don’t believe that’s likely.

But there are mechanisms that will blunt any adverse impacts of people choosing not to return to work, economists said.

For one, if workers refuse a work offer â€” say, from a prior boss who’d furloughed them or laid them off â€” they generally won’t be able to continue collecting unemployment.

Because more than 33 million Americans have filed for unemployment over the past seven weeks, state unemployment funds are being drained quickly, giving states an incentive not to be lenient in their interpretations of who can continue to collect benefits, Stevenson said.

States may also try to claw back some unemployment pay in certain circumstances like fraud.

Plus, just because a worker is unemployed doesn’t mean they will be necessarily be deemed eligible by a state. And workers in most states have had significant challenges filing applications for unemployment benefits and getting them processed amid record volume surges.

Some have waited roughly two months without seeing one payment.

The temporary nature of the extra $ 600 payment may dissuade others from being lax about their employment situation.

“Turning [employment] down in an environment where there aren’t many jobs isn’t likely to make sense for very many people,” Rothstein said.

With reporting from CNBC’s Nate Rattner.