Latest News
Home /In a post-coronavirus world, China looks set to grow while the rest of the world contracts 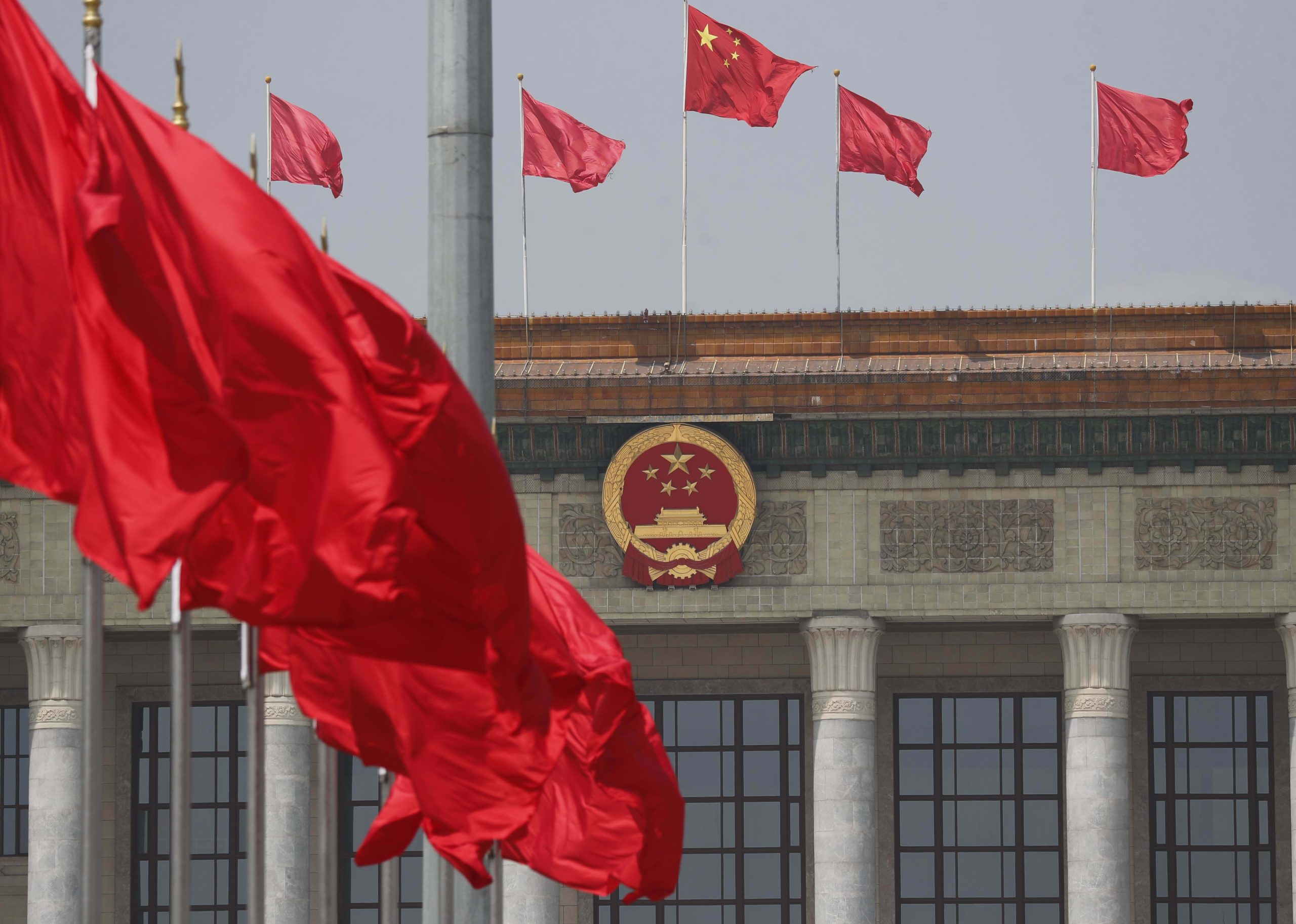 Red flags fly in front of the Great Hall of the People as the third session of the 13th National People’s Congress (NPC) opens on May 22, 2020 in Beijing, China.

BEIJING â€” The U.S.-China relationship is at a critical turning point, analysts say, and hints of what the global landscape could look like have emerged in the few days since China’s annual parliamentary meeting wrapped up.

The highly symbolic congress â€“ which concluded last Thursday after nearly a week of meetings â€“ sent a strong signal to its people that China has overcome the disease, and that business is quickly getting back to normal.

Beijing also used the gathering to introduce a new security bill for the special administrative region of Hong Kong, which enjoys a semi-autonomous status. But China’s decision to approve the proposed law, that critics say will grant the central government sweeping powers to crush dissent, set off a strong reaction from U.S. President Donald Trump‘s administration which threatened retaliation.

Geopolitics aside, several analysts agree a reality is emerging for businesses: In the face of a global recession, China looks set to be one of the few countries that will expand, economically and politically.

“Given the current pace of things at the moment and the way the (U.S.-China) relationship is shaping (up) at the moment, this is something to be taken seriously by businesses,” said Tom Rafferty, regional director of Asia at The Economist Intelligence Unit (EIU).

The trade war has shifted into a technological, and now, financial conflict, he said in a phone call, predicting targeted actions such as U.S. sanctions on Chinese financial entities.

China, where the coronavirus first emerged late last year in the city of Wuhan, is also the first country to recover from business shutdowns imposed in an effort to control the outbreak.

More than 4,600 people have died from Covid-19 in China, while the death toll tops 100,000 in the U.S., the hardest-hit country in the world. The virus that caused a global pandemic has infected well over 6 million people worldwide.

According to the latest International Monetary Fund projections, China is set to grow just over 1% in 2020, while the U.S. economy will likely contract nearly 6% this year â€” worse than the global 3% decline in growth.

“Globalization itself is going to survive. It’s going to be adjusted around some of these issues especially the tech,” said Walter Lohman, director of the Asian Studies Center at The Heritage Foundation, from which the Trump administration has drawn many of its staff.

“People are still going to want to invest in China for the China market,” he said in a phone call. “We’ve been talking about it for 100 years. It’s here now and there are companies that want to access it. China isn’t the worst place to do business. Even on the transparency side it’s kind of in the middle.”

For the first time in about two decades, the world’s second-largest economy did not to set an annual GDP target at its latest parliamentary meeting. Instead, authorities set targets for items such as unemployment. Many economists said removing the target will hopefully improve the quality of growth, and predict the economy could expand by about 1% to 3% this year.

Geopolitical tensions and the coronavirus have stalled foreign direct investment into China. But companies have vested interests that are unlikely to change quickly.

Analysts from research firm Gavekal Dragonomics said in a report in August that in 2016, American business sales in China topped $ 450 billion, while the Chinese sales in the U.S. were less than $ 50 billion.

“The signals in all of our communications and interactions with government is they are welcoming to American business in China, and really making it a point to ensure that whether it be related to subsidies or other types of support that they are supportive,” Alan Beebe, president of the American Chamber of Commerce in China, told reporters on Friday morning. “That’s been a pretty consistent trend that we’ve noticed this year.”

Beebe also noted the Chinese government has asked for the chamber’s support in recommending to policymakers effective ways that stimulus can be efficiently channeled to small- and medium-sized companies.

China has been a little more forceful on the geopolitical front. Controversy over the origin of the coronavirus spurred heated commentary from Chinese diplomats that’s spread tensions beyond the U.S. to parts of Europe, Australia and other countries.

So you can’t expect China to be as quiet as it was 20 to 40 years ago … China is a different China. It should have the right (to express its) point of view around this world.

president, Center for China and Globalization

China has more students and businesses going global, said Wang Huiyao, an advisor to the Chinese government and the president of Beijing-based think tank, Center for China and Globalization.

“So you can’t expect China to be as quiet as it was 20 to 40 years ago,” he said in a phone call, noting others may begin to see the merits of a different system. “China is a different China. It should have the right (to express its) point of view around this world.”

The country’s optimism overshadows remaining challenges at home, and the political risks U.S. and other businesses may face from their own governments.

“China’s problem is this. There are two Chinas. One is the first world cities that we see and go to. The rest is a third-world country,” George Friedman, chairman of Geopolitical Futures, an online publication focused on global affairs, said in a phone call.

He’s skeptical of China’s aim to eliminate poverty this year. “In all likelihood this tension between US and China will likely increase, and China is going to have to deal with the problem domestically, not just to increase domestic consumption but accept the limits of what it can do with the United States.”

The growing U.S. political antagonism toward China will last longer than the current election cycle, said the Heritage  Foundation’s Lohman.

“Really, ideally, to get back to a decent place in the relationship, we need a return to real market reform in China,” he said. “That would include privatization, disciplines on state-owned enterprises, better rules around subsidies (and) addressing this issue of technology coercion.”

Trump felled the latest blow by announcing on Friday he would start to take action for eliminating Hong Kong’s special trading status with the U.S. The move was a response to China’s formal approval a day earlier of a new security law for Hong Kong, meant to ease Beijing’s concerns about the threat of year-long protests in the city to its sovereignty.

“The HK legislation’s obviously an expression of political confidence on China’s side,” said the EIU’s Rafferty.

“One key variable going forward is the U.S. position and whether the U.S. is willing to stay globally engaged in multilateral institutions,” Rafferty said. “My base case is America will stay engaged.”

While Trump said the changes would “affect the full range” of agreements that give Hong Kong preferential treatment versus mainland China, he gave few details. Similarly, the new security law leaves plenty of uncertainty over the extent to which the central Chinese government will begin to actively control affairs in Hong Kong, which has so far remained a city with greater freedom of speech and alignment with international financial standards than the mainland.

“This announcement does not mean that US companies will be flipping a switch in HK and running for the exits,” American Chamber of Commerce in Hong Kong President Tara Joseph said in an email to CNBC. “There are many unanswered questions about how the US â€“ HK special status could be unwound. The more clarity business receives, the more helpful it will be at this challenging juncture.”

In the immediate future, many analysts point out that the U.S. has far more business interests at stake in Hong Kong. On the other hand, pressure in U.S. financial markets will likely send more Chinese companies to the Hong Kong exchange for listings, which will likely offset outflows, according to Bruce Pang of China Renaissance.

Leaders have emphasized how they will increase the industries available for investment, while threatening to put foreign firms on an “unreliable entity list,” a blacklist for foreign organizations and individuals that damage the interests of domestic firms. But no details have emerged 12 months out.

“We find ourselves in a moment where the voices of scapegoating (foreign countries for the pandemic) are getting louder,” Jeffrey Lehman, Vice Chancellor of New York University in Shanghai and chair of the board for the American Chamber of Commerce in Shanghai. “But I’m an optimist and I think over time, those voices will subside as leaders in the business community step forward and say, ‘We know the benefits that humans everywhere enjoy (from globalization).'”

Until the details on recent political proclamations become clear, China and the U.S. publicly maintain that communication channels are open â€“ for now. And others in international business hold out hope for more constructive discussions.

“We don’t want to leave China,” Joerg Wuttke, President of the European Chamber of Commerce in China, said in a phone call. “That’s why we engage more with China and ask for more.”

In an increasingly tense environment, Wuttke said the EU Chamber is looking for incremental areas of cooperation around China. “In this kind of situation, there are no big solutions anymore.”