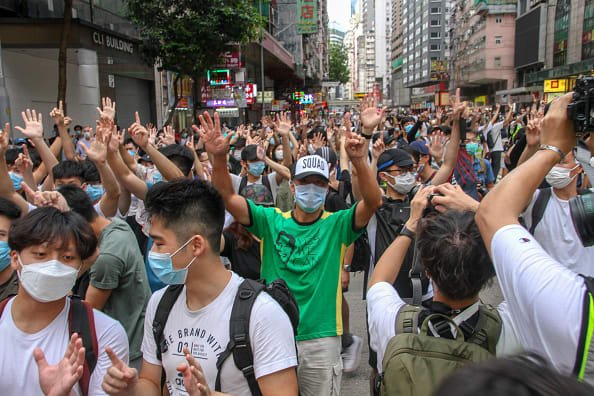 About 370 protesters were arrested in Hong Kong on Wednesday — 10 of them were apprehended for breaching the new security law just one day after it took effect.

Police used water cannons to disperse thousands of demonstrators in Hong Kong who poured out into the streets. In some cases, the protests turned violent. Seven officers were injured while on duty, police said.

Opponents of the law say it undermines the city’s autonomy that was promised when Hong Kong was handed over from the U.K. to China.

British Foreign Minister Dominic Raab said the fact that Beijing can have jurisdiction over complex national security cases is a “flagrant assault on freedom of speech and freedom of peaceful protest for the people of Hong Kong.”

Under the “one country, two systems” policy, the territory is given more freedoms than other cities in China, and has a largely separate legal and economic system from the mainland that is attractive to international businesses. That framework was supposed to be in place until 2047.

Critics say the new law grants the central government in Beijing sweeping powers to clamp down on dissent in the Chinese territory, which saw more than a year of protests that sometimes turned violent.

I don’t see why Hong Kong as a financial center will be severely affected by this law.

But analysts say it may be premature to draw conclusions about its impact on Hong Kong.

Whether the new law affects Hong Kong’s attractiveness as a leading financial center will depend on the implementation of the legislation, said Tim Summers, a senior fellow at think tank, Chatham House.

“There’s quite a bit in there that could be used in a fairly assertive way if the authorities want to. At the same time, we’ve had a number of officials in Beijing over the last months saying that the law will only be used to target a very small minority of people,” he told CNBC’s “Squawk Box Asia” on Wednesday, before the arrests were announced.

Summers also said that hearings for national security cases would be “rather separate” from normal court procedures.

“I think the commercial law, the commercial cases should be able to continue much as they have done in the past. That could continue to bolster Hong Kong’s standing,” he said.

Lau Siu-kai, vice-president of Beijing-based think tank, China Association of Hong Kong and Macao Studies, agreed that the city could retain its standing as a financial hub.

He said the law “only targets four major offenses” and isn’t “comprehensive.”

“In fact I would say that, as a financial center, Hong Kong needs political stability, and needs law and order,” Lau told CNBC’s “Street Signs Asia” on early Wednesday.

“I don’t see why Hong Kong as a financial center will be severely affected by this law,” he said.

The legislation could have a “chilling effect” on international business sentiment, making it more difficult to attract overseas capital and talent, Nick Marro, global trade lead of The Economist Intelligence Unit, said in a note on Wednesday.

“This could have consequences for future local investment and job growth, although this could be offset to a degree by mainland Chinese firms increasing their presence in the territory,” he added.

Chatham House’s Summers also said Hong Kong could get a “boost” from Chinese listings as a result of the U.S.-China conflict.

“I think there’s a number of factors in the mix here,” he said. “It’s going to be difficult to assess how those are going to play out over the coming months.