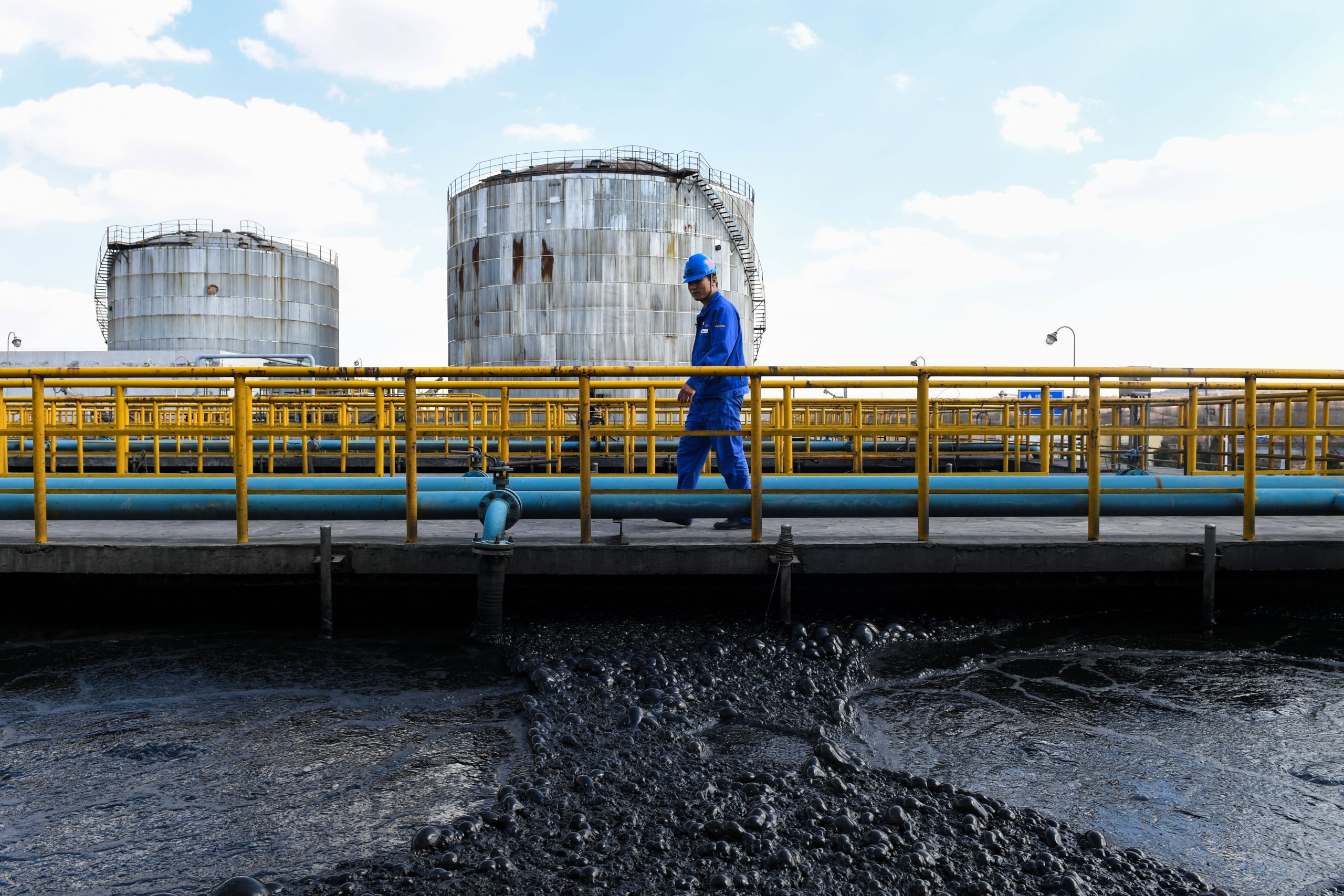 BEIJING â€” China has a lot more to worry about at home than its foreign policy. Some energy-related companies in the country have found themselves caught in a business cycle that shows how difficult it can be for stimulus to help the economy in the form of bank loans.

The world’s second-largest economy contracted 6.8% in the first quarter at the height of the coronavirus pandemic. Among many measures to support growth, authorities have repeatedly emphasized how banks need to lend more to smaller, privately run businesses versus state-owned giants.

At the same time, Beijing has increased efforts to develop renewable energy, which can ultimately give China an edge in globally sought-after technology. But the coronavirus has made banks and investors more cautious about putting money into such unproven technologies, and history indicates the challenges run deep for any privately run company that might want to participate in this growth opportunity.

China is the world’s largest consumer of coal, and accounts for nearly half of global investment in renewable energy. When it comes to specific technologies such as waste-to-energy, solar and wind power or hydrogen fuel cells, scientists from the U.S. to Europe speak generally of rapid advancement in Chinese renewables, which has helped drive down costs.

It’s less clear which technology will ultimately gain the scale needed for widespread use. But China is trying as many as possible. The government would like non-fossil fuels to account for at least a fifth of energy in ten years, and aims to increase national security by cutting energy imports.

“China’s installed renewable energy (RE) capacity is the highest in the world, but there are no guidelines for renewables utilisation in the nationwide energy framework, due to lack of planning and a largely rigid overall energy system,” Guido D. Giacconi, national chair, energy working group of the European Union Chamber of Commerce in China (EUCCC), said in a statement a few weeks ago.

He pointed out that China’s post-coronavirus infrastructure stimulus plan has been updated to include energy transfer and storage projects.

“Energy transition is no longer just a priority for decarbonisation and climate change,” he said. “It is now a way for China to meet long-term economic, political and technology leadership goals.”

For privately run companies in China wanting to participate in that growth, just being in the right industry isn’t a guarantee. That’s due to a complex web of interests and underdeveloped systems for managing risk â€“ and the transmission of capital.

“The (privately owned enterprises) POEs, they really have this disadvantage of refinancing cost(s) when compared to SOEs,” Apple Li, director at S&P Global Ratings, said in a phone interview. “Particularly in the utilities sector, capex is quite high and leverage is quite high. It really depends on how companies can secure funding from the banks and also settle the account receivables from their counterparties.”

Chinese banks prefer to lend to less risky state-owned enterprises, and need to earn profits themselves. Privately run companies with potentially innovative but largely unproven technologies can be too risky for the banks, the largest of which are state-owned. The major energy companies in China are state-owned.

Underdeveloped regulation allowed many companies to borrow and expand too quickly, until Chinese authorities began to tighten restrictions on leverage three years ago, according to Zhu Chunyang, executive director, environmental & public utilities chief analyst at the research and development center at China Merchants Securities.

“Energy transition is no longer just a priority for decarbonisation and climate change. It is now a way for China to meet long-term economic, political and technology leadership goals.”

China’s Securities Times pointed out last week that 122 mainland stocks, known as A-shares, had a share price of less than 2 yuan, below the average 9.47 yuan a share. Several are in energy-related businesses, including two that are subsidiaries of Shenwu Group, which develops technologies for more efficient coal usage, waste-to-energy and hydrogen production from plants. The two subsidiaries alone once commanded a combined market valuation of about 61 billion yuan ($ 8.7 billion) at their peak in 2017, according to Wind Information data. In the last few weeks, that valuation stood at under 1 billion yuan.

Lack of capital has forced many of Shenwu’s projects to halt, Ruan Liming, assistant dean and director of scientific research at the Beijing-based company’s research institute, said in late April, just a few days after the company resumed work in the wake of the coronavirus outbreak.

The company took far longer than others to resume work since some of its operations are in Hubei, the province where the Covid-19 disease first emerged late last year. The disease has since infected more than 6.2 million people and killed more than 375,000 people globally.

The banks say we don’t meet the conditions for getting a loan, Ruan said. The company expects that if it can get 500 million to 1 billion yuan, then at least four projects can proceed, allowing for new orders to come in.

For now, the more than 20-year-old company is just trying to stay alive, cutting its workforce nationwide â€” which three years ago stood at 4,000 â€” to about 500 people and negotiating with potential investors, including those affiliated with the state.

Shenwu also faces many lawsuits in the wake of the financial strains, according to records accessed through Wind Information. That contrasts with high-profile recognition several years ago by key government ministries as an industry pioneer. The International Energy Agency also pointed to Shenwu’s growth in an article in 2016 describing the value of such “energy service companies (escos).”

A year earlier, a paper by researchers from the Pacific Northwest National Laboratory, Lawrence Berkeley National Laboratory and the ESCO Committee of China Energy Conservation Association pointed out that in order to get projects, these companies had to acquire capital themselves and share any energy savings with their industrial customers, putting “tremendous financial pressure” on the businesses.

More recently, as the industry has grown, some companies have been able to use a different model in which they don’t need to make any of the investment, and may be able to get financing from banks, Meredydd Evans, one of the Pacific Northwest senior scientists, said in a phone interview last month. Still, she noted, the industry relies mostly on private equity.

It’s not that the companies don’t have the technology, Junjie Zhang, director of the environmental research center at Duke Kunshan University located near Shanghai, said in a phone interview. “The challenge is that, can you find a good financial model that can make the project sustainable and manageable, and actually many environmental companies, they failed in the financial model when they are dealing with those (public-private partnership) projects.”

With the right incentive, state-owned conglomerates can be quite innovative since they don’t need to worry about short-term financial constraints, Zhang said.

His team’s research of environmental innovations based on patent filings found that the top three companies were all state-owned: PetroChina, China Metallurgical and China National Grid.

That state presence is another challenge privately owned environment technology companies can face. The one-party, authoritarian Chinese government has gradually peeled back state ownership over the last 40 years, although critics say the process has reversed in the last few years. Today, the majority of jobs and economic growth come from privately owned businesses.

But state-owned enterprises still dominate. Their share of corporate bond issuance rose in the first quarter to 91%, while that of privately owned enterprises fell to 9% of the total, down from 11% the prior quarter, according to Fitch Ratings.

Jenny Huang, director of China corporate research at Fitch, pointed out in a phone interview that the coronavirus has made investors more cautious, so they prefer state-affiliated holdings. Last year, she said many privately owned companies wanted to benefit from the identity of a state-owned entity and gave state-owned investors control of the business, even if they only had a minority stake.

The road ahead remains tough for many of these businesses.

For one privately owned environmental technology company, receiving a provincial-level energy group investment helped it gain a “positive” outlook from S&P Global Ratings in September. But in May, S&P lowered its outlook to “stable” on what’s now known as Zheneng Jinjiang Environment due to “weakened cash generation ability and increasing leverage on debt-funded waste-to-energy (WTE) products.”