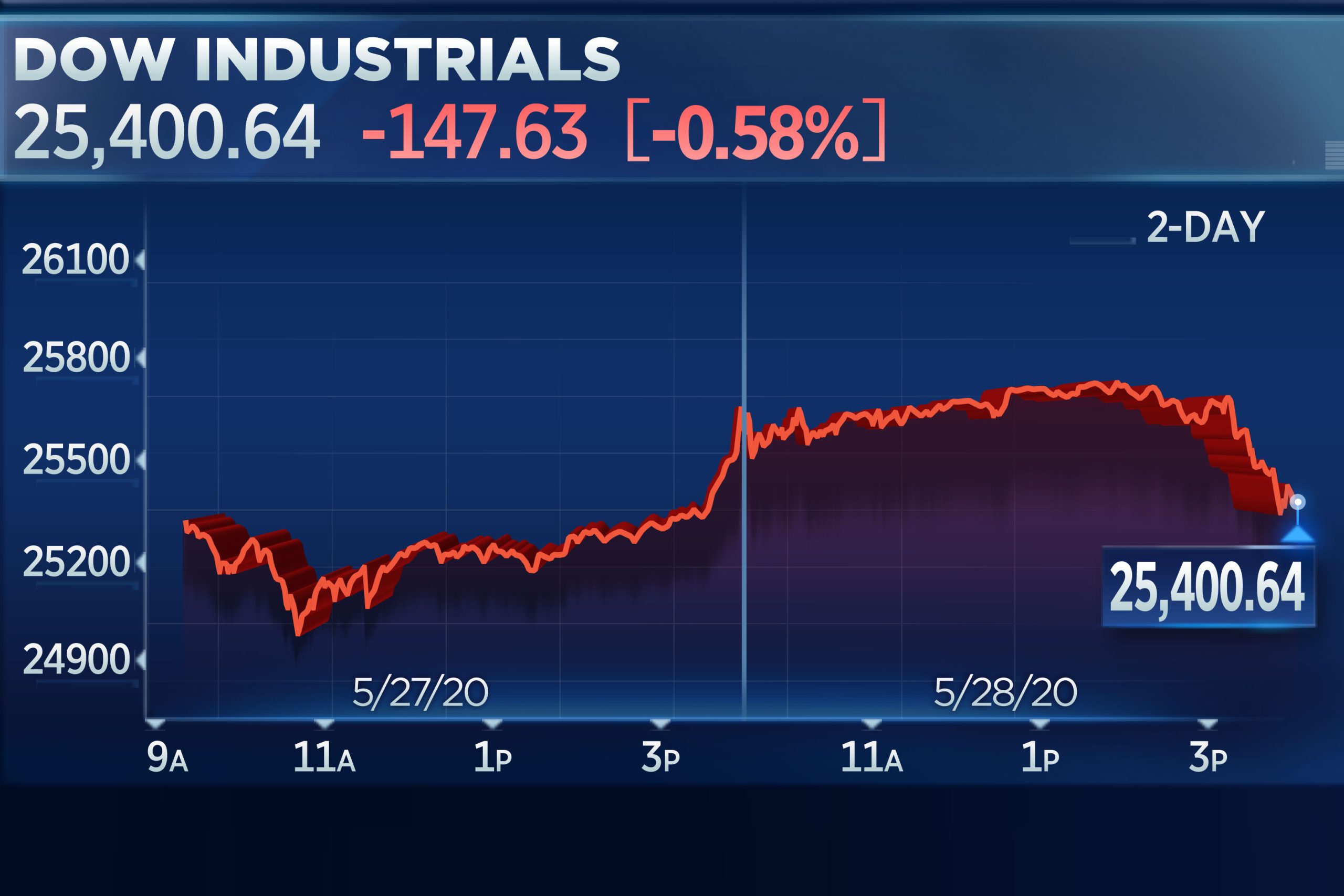 Stocks closed lower on Thursday, erasing solid gains from earlier in the day, after President Donald Trump said he would be giving a news conference Friday regarding China.

“If the HK response involves broad sanctions against individuals or entities, that would be a larger issue and not something the [market] could easily dismiss,” said Adam Crisafulli of Vital Knowledge, in a note. Stock valuations are “too high in general and leaves no room for error while investors aren’t paying enough attention to rising US-China tensions.”

Facebook and Netflix fell more than 1% each while Amazon and Alphabet posted small losses. Bank stocks gave back some of their strong gains for the week. Citigroup dropped 5.9% while Bank of America declined by 4.3%. Wells Fargo dipped 2.6% and JPMorgan Chase slipped 1.5%.

Stocks traded higher for most of the session as the latest unemployment data signaled the worst of the economic damage from the coronavirus pandemic may be over.

The Labor Department said Thursday another 2.1 million Americans filed for unemployment benefits last week. That’s more than a Dow Jones estimate of 2.05 million. To be sure, the pace of new filings has dropped from previous weeks. Continuing claims, which represent a better unemployment picture, plunged by nearly 4 million in their first decline since the coronavirus outbreak.

Bank of America CEO Brian Moynihan told CNBC’s “Squawk Box” on Thursday that the U.S. economy is coming “out of the hole,” noting: “You’re seeing us come out of the depths of where we were in April, and that’s good news.”

Despite Thursday’s decline, the major averages were all higher for the week. The S&P 500 and Dow were up 2.5% and 3.8% week to date, respectively, while the Nasdaq is up 0.5% this week.

Traders say this week’s rally is in large part thanks to optimism about the reopening of the U.S. economy.

“The greatest stimulus for the economy is a safe reopening,” wrote Gregory Faranello, head of U.S. rates trading at AmeriVet Securities. “In the end, reopening in and of itself will gradually show improvement although the true demand side still remains unclear.”