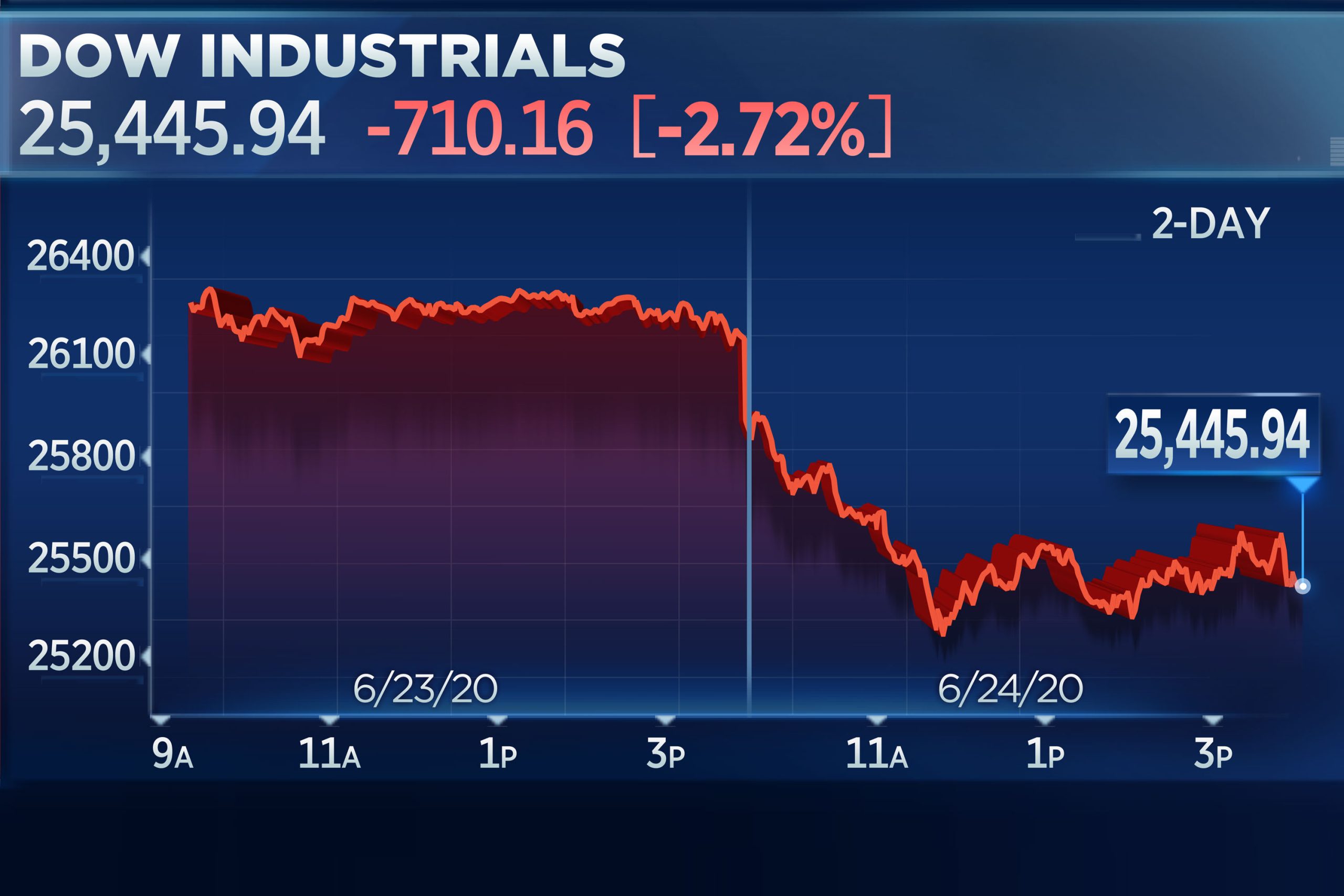 Stocks fell sharply on Wednesday as the increasing number of newly confirmed coronavirus cases dampened expectations of an economic recovery.

Florida said its confirmed cases jumped by 5,508 on Tuesday, a record, and now total 109,014. The state also said its positivity rate rose to 15.91% from 10.82%. Stocks fell to their session lows after Florida reported its latest case figures.  At one point, the Dow had fallen more than 800 points on Wednesday.

California is one of the states that has also seen a dramatic spike in cases, adding a record of more than 7,000 in one day on Tuesday. In Texas, the Covid-19 number of Covid-19 cases jumped by 5,489. Meanwhile, New York, New Jersey and Connecticut ordered visitors from certain hotspot states to quarantine for 14 days.

“The latest coronavirus news is not positive for the stock market which was betting the worst of the pandemic recession was behind us,” said Chris Rupkey, chief financial economist at MUFG. “All the hopes of investors looking for a better economy to improve the bottom lines of companies shut down in the recession have been dashed. Forget about the fears of the virus coming back in the fall, the number of new cases and hospitalizations in states like Arizona, Texas, and Florida says the threat is happening right now.”

Shares of companies primed to benefit from the economy reopening faltered. United Airlines fell 8.3%. Delta, American and Southwest all slid over 7%. Airlines were especially hit by the quarantine orders issued by New York, New Jersey and Connecticut.

“It’s definitely the reason for the last leg down. Airline stocks and transports are down, and oil tanked,” said Peter Boockvar, chief investment officer at Bleakley Advisory Group. “The regional quarantine sparked concerns about a dampening of activity as the economy in the region is just reopening.”

Carnival, Norwegian Cruise Line and Royal Caribbean were lower by 11.1%, 12.4% and 11.3%, respectively. Retailer Gap also fell 7.8%. Disney, meanwhile, declined by 3.9% after its Orlando theme-park workers petitioned to postpone the reopening amid the spike in cases in Florida.

The “market is going down on this…bottom line,” Evercore ISI strategist Dennis DeBusschere wrote in an email. It “brings up the question: What will California do? They have had consistent case growth and never really opened up.”

Masks and social distancing, which had been enforced to varying degrees across the country in recent week, “will become the norm nationally,” the strategist wrote.

He added that the Covid numbers also have implications for politics and policy that the market may not like. Specifically, DeBusschere argued that the infection spike weighs against President Trump’s odds of reelection and reinforce the case for even more fiscal stimulus from Congress.

Wednesday’s sell-off in equities led investors into traditional safe havens such as gold and Treasurys. Gold prices hit their highest levels in nearly eight years, before retreating. The 10-year Treasury note yield fell to 0.68%. To be sure, the drop in stocks would feel even more significant if it occurred any other year, but in 2020, volatility is the norm. The 2.7% drop by the Dow was just its 16th worst drop this year.

“Markets pause with all eyes on the virus and the reopening heading into the summer months,” said Gregory Faranello, head of U.S. rates trading at AmeriVet Securities, in a note.  The health side is back front and center as both monetary and fiscal liquidity has been factored in short-term. We have entered a new phase of this crisis.”

Wall Street was coming off a banner day, with the Nasdaq Composite posting its 21st closing record for 2020 on Tuesday. The Nasdaq’s gain on Tuesday also represented its eighth straight day of gains, its longest winning streak since December, when it advanced for 11 straight sessions.