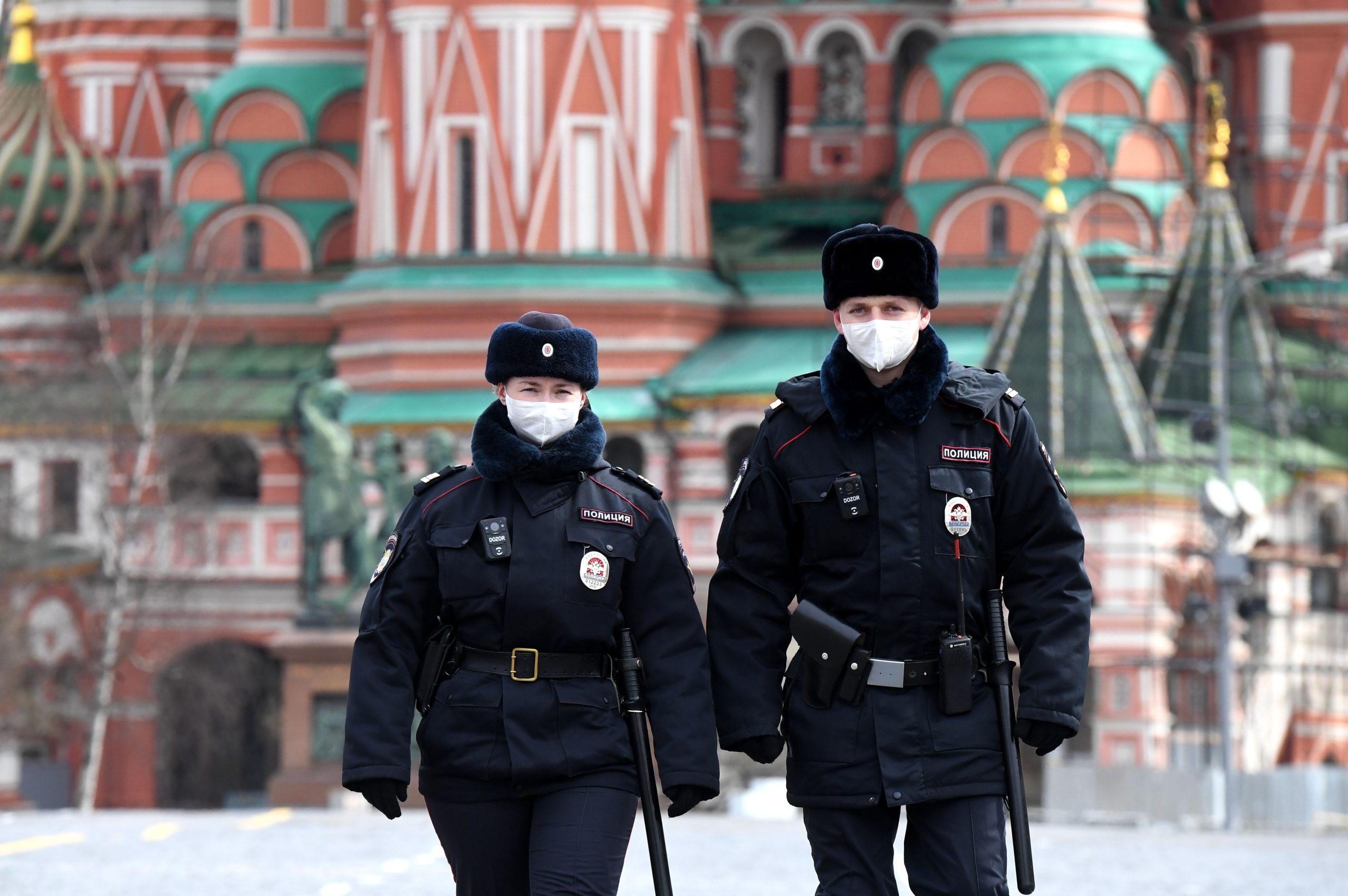 MOSCOW, April 6, 2020 .Police officers wearing face masks patrol on Red Square in Moscow, Russia, on April 6, 2020. Russia has registered 6,343 cases of COVID-19 across most of its regions as of Monday, rising by a new daily record of 954, official data showed. (Sputnik/Handout to Xinhua via Getty) (Xinhua/ via Getty Images)

The data above was compiled by Johns Hopkins University as of 1:16 p.m. Beijing time.

The Philippines’ health ministry reported 12 new deaths from the coronavirus on Sunday, bringing the country’s total death toll to 409. Its cases rose by 172 in the preceding 24 hours to a new total of 6,259, and reported 56 patients having recovered, bringing its total confirmed recoveries to 572, the ministry said. â€”Natasha Turak

The U.K.’s Captain Tom Moore, a 99-year-old World War Two veteran raising money for the country’s frontline National Health Service workers, raised a whopping Â£25 million ($ 31.3 million) on Sunday by walking 100 loops of his garden in a feat that has attracted worldwide media attention and praise from celebrities, government officials and royals alike.

“Congratulations to Tom. What he’s done is utterly amazing. It’s not just what he’s done but it’s the reaction that people have had as well. Just wonderfully British,” Prince Harry told Declassified, a podcast for veterans, this weekend.

World War II veteran Tom Moore is raising money for the NHS, by aiming to complete 100 laps of his garden by his 100th birthday at the end of April.

Moore had initially set out to raise Â£1,000 for the NHS by completing 100 rounds of 25 meters (82 feet) of his garden in Bedfordshire, central England before turning 100 on April 30. Using a walker with wheels, which he has used since breaking his hip, the retired army officer completed his goal on Thursday.

“I am still amazed by the amount of kindness and generosity from the U.K. public who continue to give despite it being an uncertain time for many,” Moore said in a statement Saturday. â€”Natasha Turak

Russia added another 6,060 new cases on Sunday â€” its highest daily rise yet, according to the Russian coronavirus crisis response center. The country’s total cases have reached 42,853 in a month that’s seen cases spike compared to previous months. â€”Natasha Turak

An empty Westminster Bridge is pictured in front of Britain’s Houses of Parliament in central London on April 13, 2020, as life in Britain continues over the Easter weekend, during the nationwide lockdown to combat the novel coronavirus pandemic. –

3:48 pm: UK not thinking of lifting lockdown measures yet: Gove

The U.K.’s coronavirus lockdown, enacted nearly a month ago, will not be eased just yet, Cabinet Office minister Michael Gove said on Sunday.

“The facts and the advice are clear at the moment that we should not be thinking of lifting of these restrictions yet,” Gove told Sky News in an interview. The country has more than 115,300 confirmed cases of Covid-19 and more than 15,400 people in the U.K. have died from it, according to Johns Hopkins University. â€”Natasha Turak

Australia’s foreign minister called for an independent review of China’s handling of the coronavirus outbreak and said transparency from Beijing is needed.

“Transparency from China most certainly. Transparency from all of the key countries across the world who will be part of any review that takes place,” Marise Payne told ABC television on Sunday.

Asked what she wants to hear from China, she answered: “We need to know the sorts of details that an independent review would identify for us about the genesis of the virus, about the approaches to dealing with it, and addressing it about the openness with which information was shared.”

“The issues around the coronavirus are issues for independent review, and I think that it is important that we do that. In fact, Australia will absolutely insist on that,” she added.

After placing a ban on exports of hydroxychloroquine last month, India has agreed to send a shipment of the medicine to the United Arab Emirates to treat coronavirus patients, the UAE’s embassy in India said late Saturday. “The first shipment of medicine, currently on its way to the UAE, includes 5.5 million pills for treatment of patients with COVID-19,” the embassy said in a statement late Saturday. Sales of the medicine have skyrocketed since Trump endorsed it as potentially effective for treating Covid-19. â€”Natasha Turak

The British government has been under tremendous pressure over shortages of protective gear for doctors and health-care workers as supplies run low for masks, gowns and equipment for those on the frontline of the coronavirus outbreak.

Deighton was previously the chief executive of the 2012 London Organising Committee of the Olympic and Paralympic Games, and was appointed on Sunday by Health Minister Matt Hancock, Reuters said.

“He will lead a singular and relentless focus on PPE as the country’s top manufacturing priority, with the full weight of the government behind him,” Hancock was cited as saying. Deighton will not be paid for the role, Reuters said.â€” Joanna Tan

People enjoy the evening sun in the park next to the Schoeneberg town hall in Berlin on April 18, 2020, amid the novel coronavirus Covid-19 pandemic.

Germany added another 2,458 new cases which brought its total number of infections to 139,897, the latest data from the country’s public health institute showed on Sunday. The latest number of new cases reported was much lower than the 3,609 infections announced on Saturday and 3,380 announced on Friday.

According to the Robert Koch Institute for infectious diseases, the death toll now stands at 4,294 after 184 more people died.

Germany has the fifth largest number of reported infections world-wide, but its death toll stands relatively low compared to Italy, Spain and France which have reported at least 19,000 fatalities each, data from Johns Hopkins University showed. â€” Joanna Tan

A couple dancing on their balcony on April 18, 2020 in Madrid, Spain. Spain is beginning to ease strict lockdown measures to ease its economy,

Prime Minister Pedro Sanchez is set to ask the parliament to extend Spain’s lockdown until May 9, extending restrictions for another 15 days, Reuters reported. “We have left behind the most extreme moments,” Sanchez said at a press briefing, the news agency said. These achievements are still insufficient and above all fragile. We cannot put them at risk with hasty solutions.”

Spain has reported 194,416 cases of infection and 20,639 deaths so far, according to the latest data from Johns Hopkins University. It has the second highest number of deaths in Europe, after Italy â€” the number of fatalities in Spain surpassed the 20,000 mark for the first time on Saturday. The government imposed lockdown measures on March 14 and the nation started easing some of those restrictions earlier this week by allowing some sectors like manufacturing to reopen, Reuters said. â€” Joanna Tan

The total number of deaths related to the new coronavirus has reached 160,518, according to the latest data from Johns Hopkins University. The United States accounts for the highest number of fatalities worldwide, and has so far reported 38,835 fatalities, of which 13,517 were from the U.S. epicenter of New York City, the data showed.

China’s National Health Commission said Sunday that there were 16 new diagnosed cases of Covid-19, of which 9 came from those returning from overseas. The country, where the new coronavirus was first reported in the city of Wuhan, has reported 4,632 deaths and 82,735 cases so far.

There were 44 new asymptomatic infections, where people tested positive for the coronavirus but showed no symptoms. China started reporting asymptomatic cases in April. Factories and businesses are re-opening again after weeks of lockdown in varying degrees throughout the mainland. A slew of economic data on Friday showed that consumers are still wary of spending as the country reported its first quarterly GDP contraction since at least 1992. â€” Joanna Tan

South Korea reported 8 new cases of Covid-19 on Sunday, data from the Korea Centers for Disease Control and Prevention showed. It was the first single digit daily increase for the first time in two months, according to Reuters. That brings the total number of reported cases in the country to 10,661.There were 2 additional deaths reported, bringing the total fatalities in the country to 234. â€” Joanna Tan

Foreign workers are seen outside their dormitory room at Cochrane Lodge I, which was declared as an isolation area on April 16, 2020 in Singapore. Singapore government reported a record of 447 new coronavirus (COVID-19) cases on April 15, 404 of which are cases linked to the foreign worker dormitories, bringing the country’s total to 3699.

Singapore added another 942 new coronavirus cases as of noon on April 18, bringing the total number of cases in the city-state to 5,992. It was the highest number of cases recorded in a single day for the Southeast Asian nation.

Of those infected, 4,162 were from dormitories housing foreign workers, data from the Ministry of Health showed. The men are typically from other Asian nations and most of them work in the construction sector. The country has reported 11 deaths related to Covid-19.

Since April 7, Singapore has been under new “circuit breaker” measures aimed at cutting down transmissions. Those measures include shutting down of schools and restriction of movements except for essential and urgent matters including buying food and groceries, seeking urgent medical help and exercising at safe distances. â€” Joanna Tan

President Donald Trump said on Saturday that Texas and Vermont will allow certain businesses to reopen on Monday while still observing coronavirus-related precautions and Montana will begin lifting restrictions on Friday.

“We continue to see a number of positive signs that the virus has passed its peak,” Trump told reporters at a daily briefing.

Some state governors have warned, however, that they will not act prematurely to reopen their economies until there is more testing.

Texas Gov. Greg Abbott said on Friday that some retailers will be able to resume “to go” services, or pickup and delivery, and that restrictions on elective surgeries would be eased. State parks will reopen on Monday for visitors wearing face masks, with social distancing required, The Dallas Morning News reported.

Gov. Phil Scott of Vermont announced that in certain low-contact professional services industries, firms could bring two people each back to work, starting Monday. Property management and construction firms can also operate with two-person crews, per the governor’s order, according to the VT Digger.

Montana Gov. Steve Bullock said Friday that his state will begin to open up next week but did not provide details. â€”Associated Press and Tucker Higgins

Israel will gradually ease its coronavirus lockdown from Sunday by letting some businesses reopen and relaxing curbs on movement after a slowdown in infection rates, Prime Minister Benjamin Netanyahu said.

The measures have battered Israel’s economy, forced many businesses to close and sent unemployment above 25%.

But in televised remarks, Netanyahu said Israel had “succeeded in (its) mission so far” in combating the pandemic and argued that the restrictions had “proven themselves in a slowdown” in infection rates.

Israel has reported at least 164 deaths and nearly 13,300 cases of COVID-19, as of Saturday evening. However, infection rates have generally declined over the past two weeks, according to Israeli health ministry data. â€”Reuters

2:55 pm: Lady Gaga’s One World: Together At Home is underway

Singer songwriter Lady Gaga partnered up with the World Health Organization and Global Citizen to organize a star-studded six-hour live concert to raise money for fighting coronavirus. The event started streaming on YouTube at 2 p.m. ET and a curated selection will be broadcast on all NBC networks, ABC, ViacomCBS Networks, The CW and iHeartMedia channels starting at 8 p.m. ET. Late night show personalities Jimmy Fallon, Stephen Colbert and Jimmey Kimmel will host the broadcast.

Performers such as Billie Eilish, Lizzo, John Legend and Taylor Swift are slated to appear. The proceeds will support WHO and frontline health care workers. â€”Elisabeth Butler Cordova