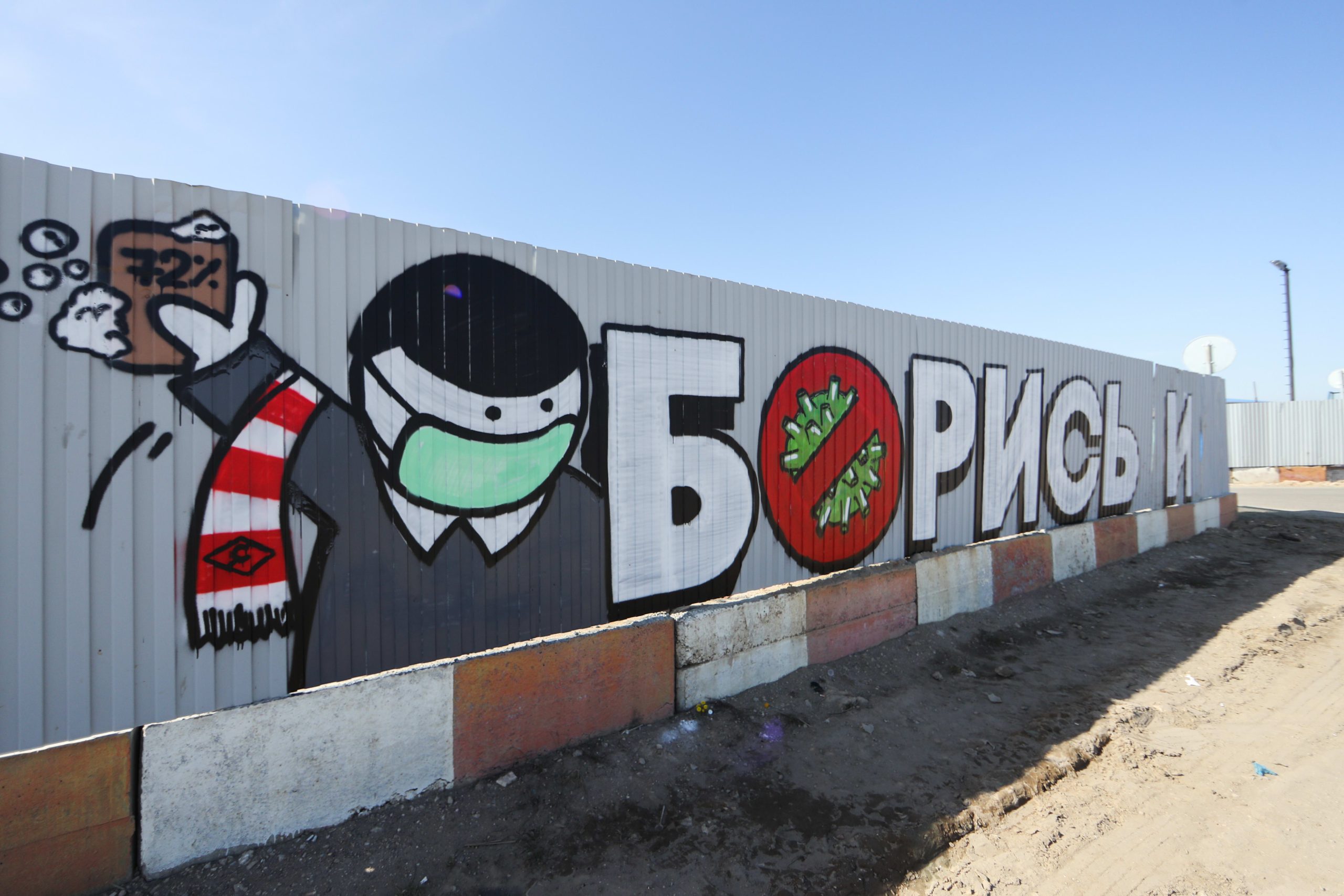 The data above was compiled by Johns Hopkins University as of 9:17 a.m. Beijing time.

Spain reported 164 coronavirus-related deaths on Sunday, the country’s lowest daily rise in fatalities since March 18, according to its health authorities. Spain is Europe’s hardest-hit country in terms of coronavirus cases with more than 216,500 cases, and has the fourth-highest death count of any country in the world following the U.S., Italy and the United Kingdom.

A mural reading “Fight!” by the construction site of a new building of the Novomoskovsky multipurpose medical center for patients suspected of the COVID-19 coronavirus infection and passengers with acute respiratory viral infection (ARVI) symptoms arriving from countries with unfavorable epidemiological situation.

Russia reported its highest daily rise in coronavirus cases yet on Sunday, its health authorities announcing 10,633 new cases for a total of 134,686.

The country’s death toll rose by 58 to 1,280, a figure that shows a slowing of the death rate in recent days and is still comparatively low when examined along with other countries, Reuters reported.

South Korea will loosen more social distancing rules and allow more businesses to reopen in a phased manner beginning May 6, its prime minister said Sunday, highlighting progress fighting the coronavirus’s spread in a country that is seen to have largely brought it under control.

Authorities “will allow businesses to resume at facilities in phases that had remained closed up until now, and also allow gatherings and events to take place assuming they follow disinfection guidelines,” Prime Minister Chung Sye-kyun said in a televised meeting.

Germany reported 793 new cases and 74 additional deaths, according to the latest figures from the Robert Koch Institute, the federal government agency responsible for disease control and prevention.

There are 162,496 confirmed cases of coronavirus in the country as well as 6,649 deaths in total. The German death toll is far lower than those seen in other European nations like Spain, Italy, and France. Around 130,600 people are said to have recovered from the illness. â€” Saheli Roy Choudhury

India typically sells more than 100,000 tonnes of buffalo meat every month, but exports in March dropped to around 40,000 tonnes, Reuters reported.

Sales are likely to have been even lower in April as most of the country was under lockdown, with meat processing plants shut, and in May, it is predicted to remain well below normal even as parts of the economy re-opens, Reuters said, citing two exporters.

The supply crunch from India has pushed up wholesale prices of frozen buffalo meat in Malaysia during the Ramadan festival, Reuters reported. â€” Saheli Roy Choudhury

India confirmed at least 39,980 cases of infection so far, according to the latest data posted on the health ministry’s website as of 8 a.m. local time on Sunday. Among them, 1,301 people have died and 10,632 are said to have recovered.

Infection cases have gone up despite the country being under lockdown since late March. That lockdown has now been extended for a second time for another two weeks after May 4.

Migrant workers who gathered at Mini Secretariat after learning that the administration was preparing to send migrant workers back to their home states, on May 2, 2020 in Gurugram, India.

New guidelines issued on Friday would allow some restrictions to be eased in districts that have a low risk of spreading the virus; they are marked as green and orange zones. Still, certain activities remain prohibited throughout the country, including the general movement of people between states, running of schools and colleges, and re-opening places of large public gatherings such as cinemas and shopping malls. â€” Saheli Roy Choudhury

11 am: Roche says it received US FDA emergency use approval for Covid-19 antibody test

Swiss drugmaker Roche said it received an emergency use authorization from the U.S. Food and Drug Administration for an antibody test that can determine if people have ever been infected with the coronavirus and developed antibodies against it.

Roche said its Elecsys Anti-SARS-CoV-2 antibody test has a specificity greater than 99.8% and that it can help assess people’s immune response to the virus.

The company said it has already started shipping the new antibody test to top laboratories globally and will step up production to “high double-digit millions per month.” â€” Saheli Roy Choudhury

China’s National Health Commission said there were two new infection cases and one of them was attributed to a traveler from overseas. No additional deaths were reported, but there were 12 new asymptomatic cases.

Cumulatively, there have been 82,877 confirmed cases of infection reported on the mainland and 4,633 people have died.

On April 17, the cumulative death toll rose substantially after an investigation in the city of Wuhan, where the outbreak was first reported, added 1,290 deaths. â€” Saheli Roy Choudhury

10:23 am: France set to impose two-week quarantine for travelers

New quarantine rules will be included in a decree specifying measures laid out in a bill extending a state of emergency until July 24 that would allow the French government to restrict freedom of movement, Reuters said.

It was not immediately clear if the quarantine rules would only apply to people arriving from outside the open-border Schengen area, whether they would need to self-isolate at home or in hotels, and for how long the measures would last, Reuters reported.

France is among one of the worst-affected countries. More than 24,700 people have died from the virus, Hopkins data showed. â€” Saheli Roy Choudhury

There were 13 new cases of infection in South Korea and no additional deaths as of Sunday morning, the Korea Centers for Disease Control and Prevention said.

South Korea has so far reported 10,793 cases of infection and 250 deaths. Social distancing efforts, mass testing and the reliance on technology helped contain the virus’ spread in the country, without resorting to severe lockdown measures seen elsewhere.

People wearing face masks over precations against the covid-19 novel coronavirus walk over a bridge before the Han river and city skyline, near the Yeouido district of Seoul on April 25, 2020.

Mexico’s health ministry said there were 1,349 new known cases of infection and another 89 people died on Saturday, Reuters reported. The total number of cases in the country stands at 22,088 and at least 2,061 deaths.

Over 3.4 million people have been infected worldwide by the coronavirus and more than 243,600 people have died from the respiratory disease Covid-19, according to data from Johns Hopkins University.

The United States reported the most number of cases, with over 1.1 million infections and more than 66,000 deaths, Hopkins data showed. Recently, the death toll from Covid-19 surpassed American fatalities from the Vietnam War.

Spain, Italy, the United Kingdom, France and Germany remain some of the worst-affected countries after the U.S.

The virus outbreak was first reported in China’s Hubei province late last year before it spread rapidly to the rest of the world in just four months. â€” Saheli Roy Choudhury

“The American miracle, the American magic has always prevailed and it will do so again,” Buffett said from Omaha, Nebraska.

The shareholder meeting was held virtually for the first time in the company’s history to help prevent the spread of the coronavirus. Read more about what Buffett said on the coronavirus from CNBC’s Fred Imbert. â€”Sara Salinas

Texas reported more than 1,000 new coronavirus cases for the third straight day as the state heads into its first weekend of reopening the economy with limited measures.

The Texas Department of Health reported 1,293 new positive cases of Covid-19 on Saturday, which is its second highest single-day infection rate. This also marks the first time Texas has recorded more than 1,000 cases three days in a row.

Texas now has a total of 30,552 positive cases and 847 fatalities. The spike in infection rate comes after Gov. Greg Abbott issued an executive order on April 28 allowing certain businesses to reopen on May 1.