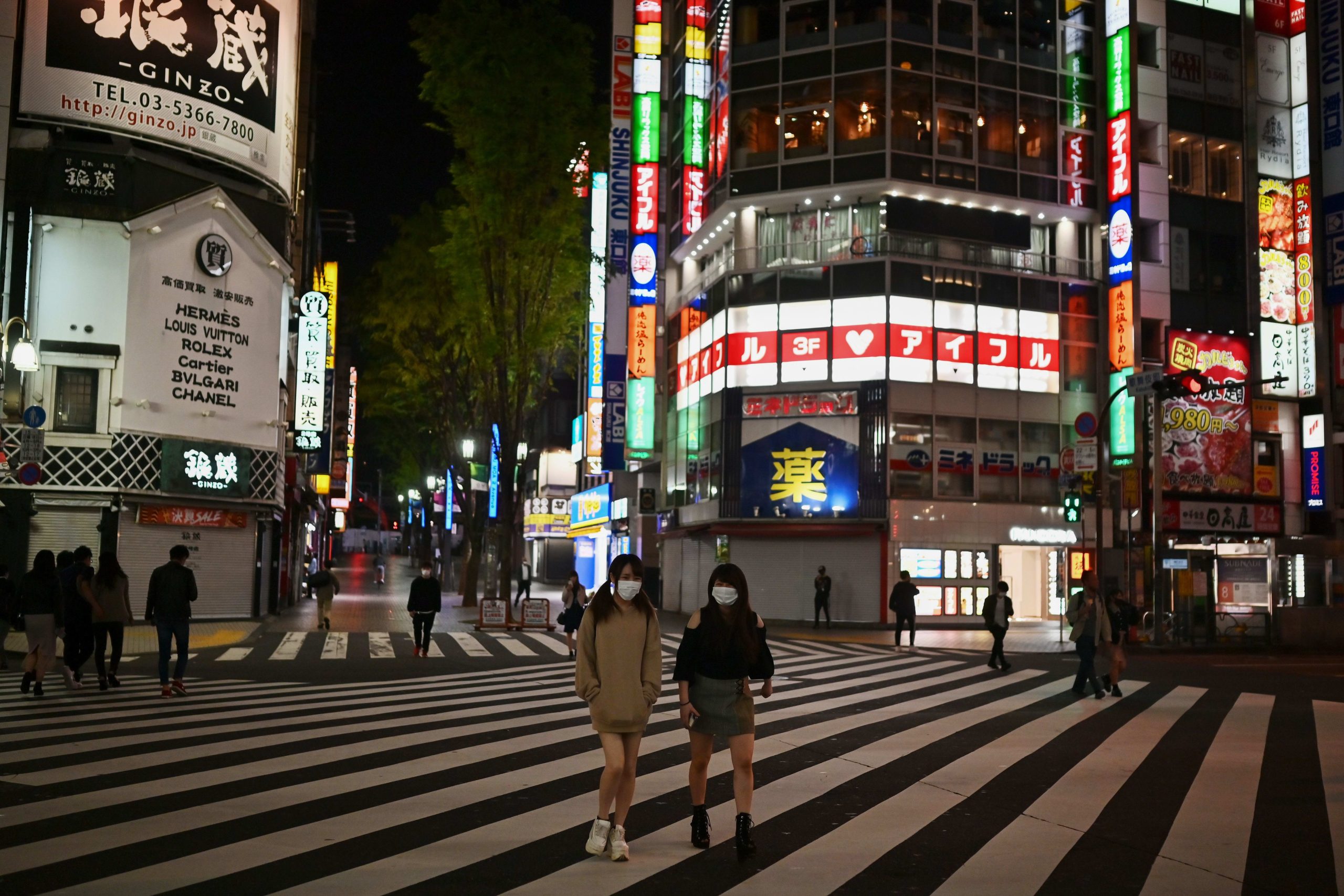 The number of confirmed coronavirus cases globally rose above 5.4 million, data compiled by Johns Hopkins University showed. In Japan, the government is seeking to end the state of emergency for Tokyo and other areas while considering $ 1 trillion in fresh stimulus for the battered economy.

Ahead of the Memorial Day holiday weekend, all states in the U.S. began to lift some restrictions implemented to halt the spread of the coronavirus. Government officials are still urging people to practice social distancing and to wear masks in public.

Changing opinions from scientists and health officials have contributed to some people refusing to wear masks because public health authorities initially advised against wearing masks, saying there was little evidence that it would help prevent people from getting sick.

China’s top diplomat criticized U.S. efforts to hold China accountable for its alleged role in the spread of the coronavirus, calling any aims to force Beijing to pay compensation for the coronavirus a “daydream.”

New Zealand to allow gatherings of 100 people from Friday

12:55 pm Singapore time â€” New Zealand will allow gatherings of up to 100 people from noon this Friday, the government announced.

That is an increase from the 10-person limit now and will apply to gatherings at home, events outside of home and at public venues. It will also apply to church services, weddings and funerals.

Japan seeks to lift state of emergency for Tokyo

10:45 am Singapore time â€” Japan is seeking to lift a state of emergency for Tokyo and other remaining areas, Reuters reported, citing the Nikkei newspaper. The government is also reportedly considering almost 100 trillion yen ($ 930 billion) in fresh stimulus for the battered economy.

Social distancing restrictions were lifted for most of Japan on May 14 as the number of new cases fell, but the government had kept Tokyo and four other prefectures under observation.

President Donald Trump speaks about the nation?s food supply chain during a coronavirus disease (COVID-19) pandemic response event in the Roosevelt Room at the White House in Washington, May 19, 2020.

Any travelers who have been in Brazil within a 14-day period will not be granted entry, effective May 28.

“Today’s action will help ensure foreign nationals who have been in Brazil do not become a source of additional infections in our country. These new restrictions do not apply to the flow of commerce between the United States and Brazil,” White House Press Secretary Kayleigh McEnany said in a statement.

Earlier in the day, Brazil surpassed Russia in total confirmed cases of Covid-19, according to data compiled by Johns Hopkins University. Brazil has recorded 347,398 cases of the virus, second only to the U.S.’s 1,639,872. Russia has recorded 344,481. â€”Sara Salinas

People exercise in Valencia on May 2, 2020, during the hours allowed by the government to go out and exercise, for the first time since the beginning of a national lockdown to prevent the spread of the COVID-19 disease. All Spaniards are again allowed to leave their homes since today to walk or play sports after 48 days of very strict confinement to curb the coronavirus pandemic.

2:18 pm ET â€” Spain is set to reopen some beaches on Monday and relax restrictions on dine-in restaurants in Barcelona and capital city Madrid, according to a report from the Associated Press. Restaurants in the two cities will be allowed to seat 50% of their outdoor dine-in capacity.

Madrid and Barcelona account for more than half of the Spain’s 28,700 confirmed deaths resulting from Covid-19, the AP reports. But the country has reported fewer than 100 deaths for eight consecutive days, a considerable drop from the hard-hit nation’s peak at more than 900 deaths a day. â€”Sara Salinas

Passengers wearing protective masks at Estacao da Luz, central region of the city of Sao Paulo, Brazil, on May 11, 2020.

The administration will likely make the decision on Sunday and will “take a look at other countries” on a case by case basis,” O’Brien said in an interview on CBS’ “Face the Nation.”

President Donald Trump recently said he is considering imposing a travel ban on Brazil shortly after the South American country’s deadliest day on record from the virus.

Brazil has the third-highest number of confirmed coronavirus infections worldwide behind the U.S. and Russia, according to data from Johns Hopkins University. â€”Emma Newburger

“We want you up. We want people to be able to watch sports. It gives people something to do. It’s a return to normalcy. We are working and encouraging all sports teams to start their training camps as soon as possible,” he said during a news briefing.

Last week, Cuomo asked major league sports teams to start planning to reopen or start their seasons without fans. While the stadiums aren’t allowed to have fans, he said the games could still be televised. â€”Jasmine Kim

“Money will go out over the next two weeks. This is a program that is just starting up,” Rosengren said in an interview on CBS’ “Face the Nation.”

The $ 600 billion program gives four-year loans to companies that are too big to meet the criteria of the Paycheck Protection Program, but too small to access the credit markets.

Businesses that are eligible must have 15,000 employees or less. â€”Emma Newburger

11:30 am ET â€” With in-person therapy paused amid ongoing shelter-in-place restrictions, Americans continue to turn to their smartphones for help.

Therapy app makers â€” including Talkspace and BetterHelp â€” have been rushing to meet a flood of new customers, but health experts remain divided on how to introduce more transparency and oversight into the ecosystem.

“Data is really the currency in the app market,” Quinn Grundy, an assistant professor at the University of Toronto’s Faculty of Nursing, said in an interview. “What this pandemic is doing is laying bare pre-existing issues.”

CNBC spoke to six mental health experts, who all echoed these concerns around privacy and efficacy, especially amid the coronavirus-induced surge in demand.

Pandemic will drive major changes to the nursing home industry

10:30 am ET â€” Nursing homes and assisted living facilities throughout the country stopped allowing family members to visit elderly or ailing loved ones as the novel coronavirus spread across the nation.

Many families with loved ones in those facilities are desperate to be able to visit them again. But that so-called return to normalcy will take time.

Virtual visits over Zoom and WebEx will likely be the norm for the foreseeable future and family members also should be prepared to undergo tests in order to visit.

Read the full report on how nursing homes will return to a new normal from CNBC’s Lorie Konish. â€”Melodie Warner

Wearing a mask is not about politics, says Ohio Gov. Mike DeWine

10:10 am ET â€” Ohio Gov. Mike DeWine told NBC’s Chuck Todd that the ongoing debate on wearing masks should not be about choosing a political party but about protecting each other.

“This is not about whether you’re liberal or conservative, left or right, republican or democrat. You wear the mask not to protect yourself so much as to protect others,” De Wine said.

In response to North Dakota Gov. Doug Burgum’s emotional message on Friday to be more empathetic instead of shaming those who wear masks, DeWine agreed and said Burgum is “spot on.”

“This is one time when we truly are all in this together. What we do directly impacts others,” he added.

Ohio reopened its retail businesses and personal-care services earlier this month. The governor said the state’s reopening plan has been “going well.”

While Ohio is not ready to allow mass gatherings of people yet, DeWine said restaurants and businesses are adapting well to public health measures. â€”Jasmine Kim

9:36 am ET â€” The U.S. unemployment rate could still be in double digits in November as a result of the coronavirus pandemic, according to White House senior advisor Kevin Hassett.

The unemployment rate rose to 14.7% in April, with more than 38 million people filing unemployment claims since Mid-March when the outbreak forced national shutdowns.

Hassett told CNN’s Dana Bash that there would be other promising signs of economic improvement, as unemployment numbers may move slower than other indicators. But he said the unemployment rate is likely headed north of 20% in the month of May.

“The unemployment rate will be higher in June than in May, but then after that it should start to trend down,” Hassett said. â€”Emma Newburger

9:03 am ET â€” Memorial Day weekend is the traditional kickoff to the peak travel season and while demand is showing some signs of life, it is still down about 90% from a year ago. The virus and concerns about it spreading have prompted new procedures at airlines and federal agencies.

The Department of Homeland Security, which includes TSA and customs, is exploring temperature checks at airports. The Transportation Security Administration is also changing some polices to limit physical contact, such as asking travelers to scan their own boarding passes and that they remove food and other items from their bags so officers don’t have to touch bins.

Starting this month, U.S. airlines require that travelers wear masks on board. They are tweaking boarding to fill seats from back to front to limit contact with other travelers. Some airlines are limiting the number of travelers on board, or letting travelers know when their flights are full. Experts warn its nearly impossible to socially distance on an aircraft, however. â€”Leslie Josephs