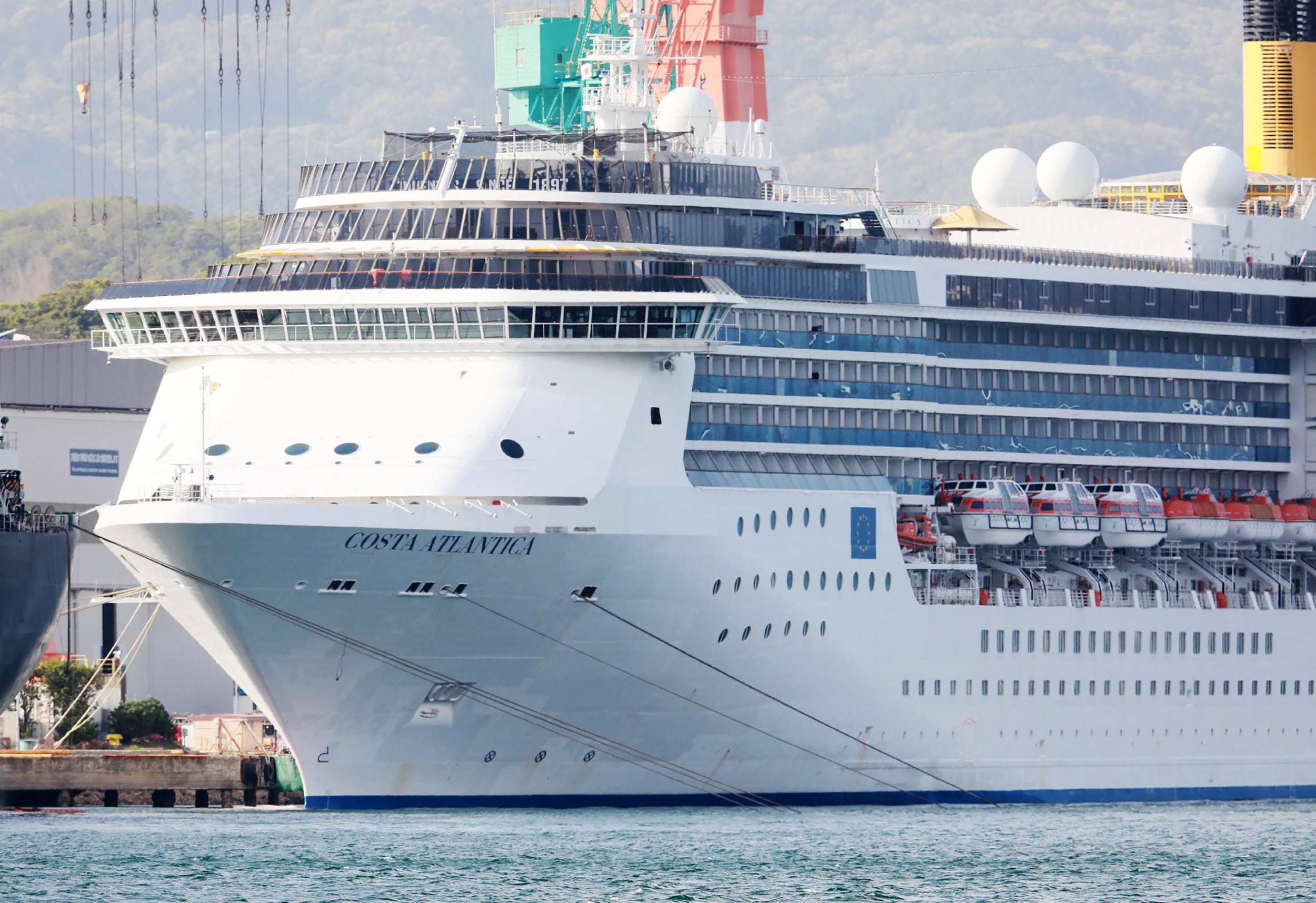 The data above was compiled by Johns Hopkins University as of 9:40 a.m. Beijing time.

In a late night press conference, Prime Minister Sophie Wilmes said that Belgium would allow an easing of virus restriction measures from May 4.

View of the popular shopping streets of downtown Rio de Janeiro, Brazil, on March 25, 2020, completely empty due to the closure decreed by the Government due to the pandemic of Coronavirus Covid-19. The region normally concentrates tens of thousands of consumers daily.

Officials in Rio de Janeiro and other cities have warned that hospital systems are on the verge of collapse, according to the Associated Press.

Thailand reported the death of a 48-year-old man as well as 53 new infections on Saturday, according to Reuters.

Taweesin Wisanuyothin, a spokesman for the government’s Centre for Covid-19 Situation Administration, said that seven of the new cases were from the southern province of Yala, according to the news agency.

The figures mean the country has now reported a total of 2,907 cases and 51 deaths. â€” Matt Clinch

India announced easing of a stringent lockdown for 1.3 billion people by allowing the opening of neighborhood and standalone shops with restrictions such as 50% of workers with face masks and social distancing. A home ministry statement issued late Friday says that shops in single and multi-brand malls would not be allowed to open anywhere in the country.

The relaxation also would not be applicable in hundreds of hotspots and containment zones across the country. India has so far reported more than 18,600 positive new coronavirus cases and 775 deaths.

India imposed a lockdown for its 1.3 billion people on March 25 and it is due to end on May 3. Last week, the government allowed resumption of manufacturing and farming activities in rural areas as millions of daily wage-earners were left without work. â€” Associated Press

The Italian cruise ship Costa Atlantica is docked at a port in Japan’s Nagasaki, where crew members have tested positive for coronavirus.

That brought the total number of cases on the Costa Atlantica to about 150. The ship is carrying 623 crew members and no passengers.

All crew members have been tested, the report said. Japanese authorities had ordered the crew not to venture beyond the quay except for hospital visits, but it discovered this week that some crew members had left without their knowledge. Officials are checking on details of their movements. â€” Weizhen Tan

Authorities in Tokyo are urging people to stay home from today till May 6 to curb the spread of the virus, according to public broadcaster NHK. This 12-day period includes Japan’s Golden Week spring holidays.

Tokyo’s governor Koike Yuriko said Friday that this period will be crucial in reducing contact between people by 80%, a target set by the country’s government, the report said.

Japan has been criticized for its slow response to the coronavirus outbreak. While many major cities globally have locked down their residents and forced shops and restaurants to close weeks ago, Japan only recently requested people to stay home and businesses to shutter temporarily. But streets remained far from empty, and shops stayed open, according to Reuters.

Singapore reported 897 new cases of Covid-19 as of Friday noon, as its number of daily cases fell below 1,000 for the first time this week.

Cases have soared in the last month. On April 1, Singapore had just around 1,000 cases, but within less than a month, it has spiked to more than 10,000. The majority of the explosion in cases has been attributed to an outbreak among its migrant worker population.

The country’s ambassador-at-large at the Ministry of Foreign Affairs, Chan Heng Chee, told CNBC that Singapore “knew that the foreign workers would be a stress point” in its fight against coronavirus, but that acting earlier would have made little difference in containing the spike in those cases. â€” Weizhen Tan

9:35 am: Daily cases in Italy rise again, but fatalities drop

New infections in Italy as of Friday rose by 3,021, an increase from the 2,646 the day before, according to Reuters.

Deaths, however, climbed by 420 â€” the smallest daily tally since March 19, the report said, citing Italy’s Civil Protection Agency. That was a decline from 464 the day before.

That brought its total number of confirmed cases to 192,994, the third highest after the U.S. and Spain.

Italy’s Prime Minister Giuseppe Conte said last week that the country will start lifting lockdown measures from May 4, but that the re-opening will be cautious and gradual, according to Reuters. â€” Weizhen Tan

An ambulance is seen in the coliseum area, during the Coronavirus (COVID-19) pandemic, on April 21, 2020 in Rome, Italy.

China reported just 12 new cases as of April 24, according to its National Health Commission (NHC). 11 were attributed to travelers coming from overseas. That takes the country’s total to 82,816 cases, according to government data.

For the 10th straight day, there were no new deaths, with total fatalities remaining at 4,632, according to the NHC.

Separately, there were 29 new asymptomatic cases, where people tested positive for the virus but did not show any symptoms. That brings its number of asymptomatic cases currently under medical observation to 983, the NHC said. â€” Weizhen Tan

Hollywood may be known for its big studios with thousands of employees and giant sound stages. But of the 5,900 businesses in Hollywood, 99.5% have less than 500 employees, and over 90% have fewer than 10 employees.

Those are costumers, prop rentals, caterers, and trailer rental companies, sound mixing specialists and film editors â€” everything used in the making of movies, TV shows, or commercials.

After Covid-19 caused entertainment productions to come to a screeching halt, the vast majority of those companies have seen their revenues plummet to zero in the past month. forcing many to lay off or furlough employees. â€”Julia Boorstin

6:24 pm: As working from home becomes more widespread, many say they don’t want to go back

The COVID-19 pandemic has forced millions of Americans to work from home. But when it’s all over, many people are thinking that trip from the kitchen to the living room may not be such a bad commute.

A 58% majority report they are still working outside the home.

Once the economy reopens, 24% say they’d like to work either entirely or more from home compared to how they worked before, while 55% plan to head back to the office and 20% are not sure. â€”Jackson Burke

As bars and restaurants remain shuttered in response to the coronavirus pandemic, Boston Beer is turning millions of dollars of expired beer into ethanol to recoup some of its lost sales.

Beer sales rose 11.6% in the week ended April 11, according to Nielsen data, as consumers drink more at home. But the spike doesn’t benefit craft brewers as much because they rely on sales in restaurants and bars. The shift in consumption trends is leading to expired kegs for many craft beer manufacturers.

Supply chain disruptions caused by the pandemic have led farmers to dump milk and crush eggs, even as grocery stores struggle to keep high-demand food items in stock.

Boston Beer, parent of Sam Adams, is taking a less wasteful approach when it comes to the $ 5.8 million in beer returned by retailers and distributors during its first quarter.

The company’s founder and chairman Jim Koch said on CNBC’s “The Exchange” Friday that it will distill the returned beer into ethanol, so it can be blended into gasoline. The company, the second-largest craft brewer in the nation, according to the Brewers Association, has been recycling stale beer like this for decades to ensure freshness, but lately it has stepped up the volume. â€”Amelia Lucas