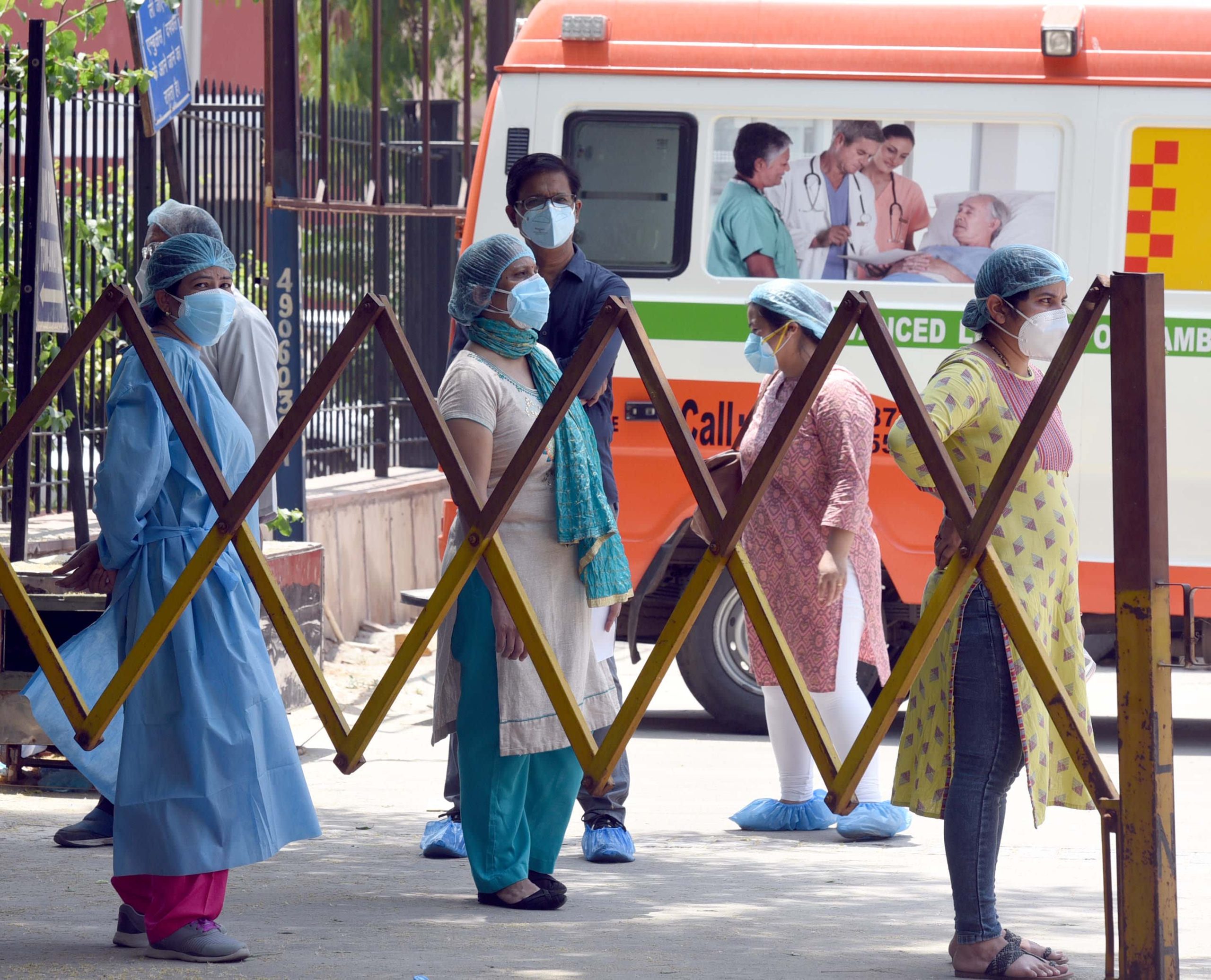 The data above was compiled by Johns Hopkins University as of 9:27 a.m. Beijing time.

India reported at least 62,939 cases of infections and 2,109 deaths, according to the latest information posted on its health ministry’s website. The state of Maharashtra is the worst-affected, with more than 20,000 reported cases.

As many as 19,357 people around the country have been cured or discharged from hospitals, according to the health ministry.

Doctors and medical staff wait for their turn during the collection of samples for Covid-19 testing at LNJP Hospital, during nationwide lockdown to curb the spread of coronavirus, on May 9, 2020 in New Delhi, India.

India has ramped up testing, according to the government.

“The testing capacity has increased in the country and it is 95,000 tests per day with 332 Government laboratories and 121 private laboratories,” Health Minister Harsh Vardhan said, adding that cumulatively, India has carried out 1,525,631 tests so far.

South Asia’s largest economy went into a nationwide lockdown in late March and that has since been extended twice. Restrictions are expected to be lifted on May 18, but there has been some easing of rules, especially in low-risk areas, though most economic activities remain on hold. â€” Saheli Roy Choudhury

South Korea confirmed 34 new cases of infection on Sunday and no new deaths, according to the latest update from the Korea Centers for Disease Control and Prevention. That was an uptick compared to the daily number of infections the country reported in recent days.

People wearing protective face masks walk through the street at night in the Itaewon area of Seoul, South Korea, on Saturday, May 9, 2020.

Yonhap reported there is an infection cluster tied to clubs in Seoul’s multicultural district of Itaewon, where a patron who visited five clubs and bars there in early May tested positive for Covid-19. Officials are trying to find about 1,510 people who went to clubs in Itaewon last week to test them, Yonhap said.

Data showed 14 of the new cases reported Sunday were in Seoul, but the KCDC did not say how many were tied to the cluster.

South Korea was one of the first major centers of outbreak outside China but mass testing and strict social distancing measures brought the daily reported cases down. Cumulatively, South Korea reported 10,874 cases of infection and 256 deaths. â€” Saheli Roy Choudhury

“Our community has demonstrated that by working together we can achieve positive results,” Berejiklian said in a statement. “The changes will allow NSW to fire up the economy, while allowing more personal freedoms.”

Starting Friday, cafes and restaurants would be able to seat 10 people at a time. Households can host up to five visitors while weddings can have a maximum of ten guests. Outdoor pools would also be allowed to open, but with restrictions in place.

The measures are part of Australia’s three-step plan to gradually ease restrictions while keeping the outbreak under control. The country has reported more than 6,900 cases and 97 deaths, with New South Wales having the highest number of infections and fatalities. â€” Saheli Roy Choudhury

People walking in the Sanlitun shopping area which hosts numerous stores, bars and art-installations, in Beijing, China on May 6, 2020.

No additional deaths were reported but there were 20 asymptomatic cases, according to the NHC.

9:52 am: Anthony Fauci expected to work mostly from home

White House health advisor Dr. Anthony Fauci is set to work mostly from home, and may go into his office where he would wear a face mask and practice social distancing, an administration official told NBC News.

He was said to have had “low-risk” exposure to a White House aide who tested positive. Fauci is the third high-ranking member of the White House coronavirus task force to practice some form of quarantine, after CDC Director Robert Redfield and FDA Commissioner Stephen Hahn. â€” Spencer Kimball, Saheli Roy Choudhury

9:11 am: CDC Director in quarantine after ‘low risk exposure’ to an infected individual in the White House

U.S. Centers for Disease Control and Prevention Director Robert Redfield will be “teleworking for the next two weeks,” the Associated Press reported. He was said to have had a “low risk exposure” to someone at the White House who had tested positive for Covid-19, the disease caused by the virus.

But Redfield felt fine and had no symptoms, the AP said, citing a CDC statement.

Hours earlier, the U.S. Food and Drug Administration said FDA Commissioner Stephen Hahn was in self-quarantine after coming into contact with someone who tested positive. Both men are part of the White House coronavirus task force. â€” Saheli Roy Choudhury

At least 279,303 people have died from the coronavirus, which has infected more than 4 million people around the world, according to the latest data from Johns Hopkins University.

A worker sprays an escalator handrail as the MTA Subway closed overnight for cleaning and disinfecting during the outbreak of the coronavirus disease (COVID-19) in the Manhattan borough of New York City, May 6, 2020.

The United States has the most number of cases and fatalities: More than 1.3 million people have been infected and over 78,700 have died.

Some of the worst-affected countries after the U.S. include Spain, Italy, United Kingdom, Russia, France and Germany. â€” Saheli Roy Choudhury