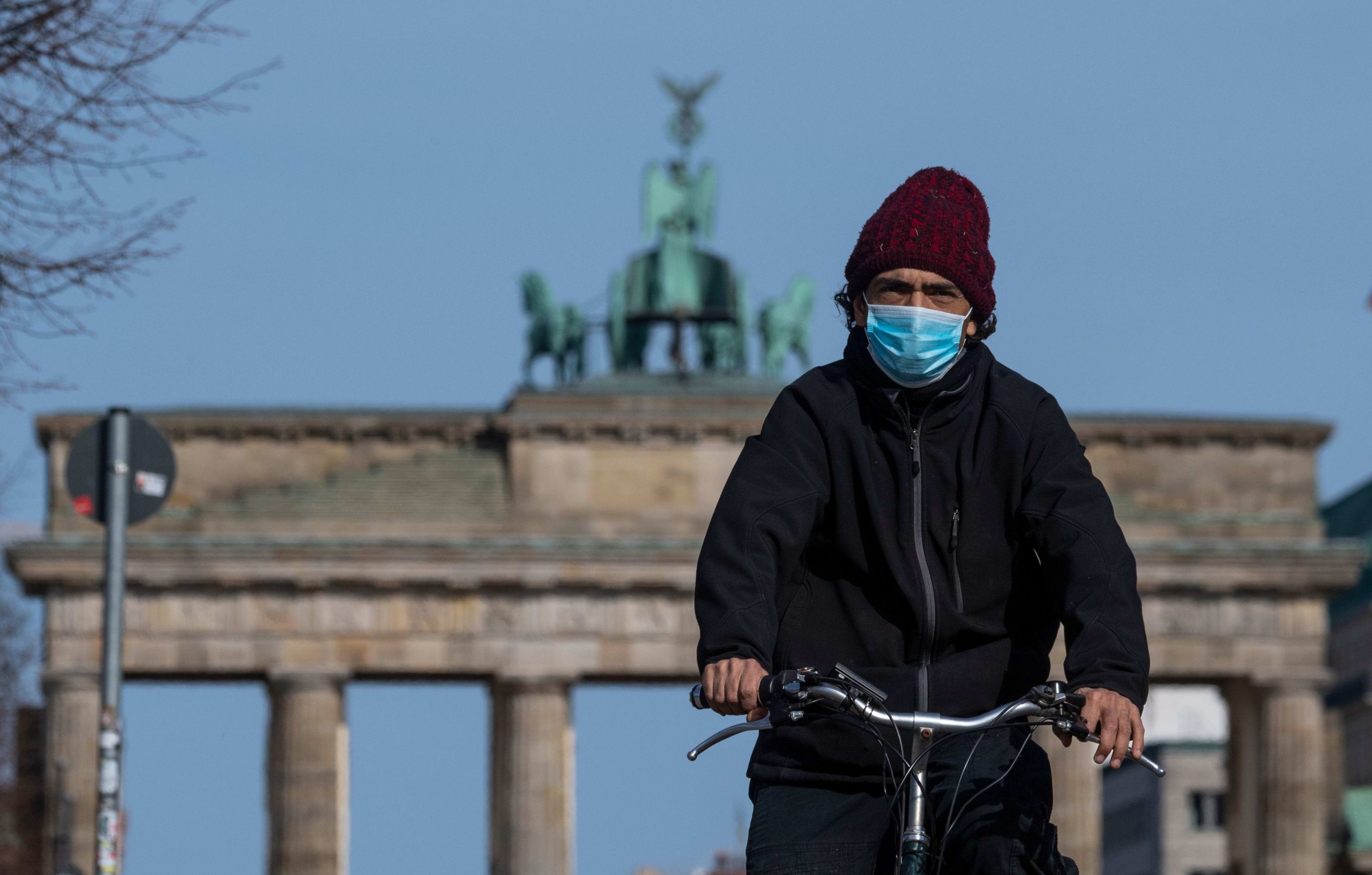 With multiple drugmakers in a push for a Covid-19 vaccine, countries are preparing for when it is finally available and putting deals in place with companies to prepare for the eventual distribution. AstraZeneca, which has a vaccine under development at Oxford and is expected to complete the experimental phase by the fall, agreed to deals with multiple countries for the distribution of its vaccine.

Italy, Germany, France and the Netherlands signed a contract with the company to supply 400 million doses of the vaccine, according to a Reuters report. AstraZeneca CEO Pascal Soriot said the drugmaker is also in talks with Japan, Russia, Brazil and China.

France to reopen restaurants in Paris

A member of the photographerâ€™s family watches French President Emmanuel Macron on an Ipad as he addresses the nation from the Elysee Palace during a televised speech broadcast by French TV channel TF1 on June 14, 2020 in Paris, France.

2:50 p.m. ET â€” French President Emmanuel Macron announced in a national address that restaurants will reopen fully in Paris on Monday as the country exits a strict lockdown.

France closed restaurants, cafes, movie theaters, nightclubs and other nonessential businesses in March to slow the spread of the virus. The government expects the economy to contract by 11% in 2020, according to Reuters.

More than 193,000 people have tested positive for the virus in France and at least 29,401 people have died. â€”Spencer Kimball, Reuters

A man wearing a face cover cycles in front of the Brandenburg Gate in Berlin on April 10, 2020, amid a new coronavirus COVID-19 pandemic.

The app uses Bluetooth technology to measure whether users are within two meters of each other for a period of 15 minutes or longer. Every five minutes an anonymous identification number is collected from app users. The place of contact is not recorded by the app.

Users who test positive for Covid-19 can enter that information into the app, which then informs all other users who came in close contact with the person. Users install the app voluntarily and it can be deactivated or removed afterward.

The app is a joint project of the German federal government, Deutsche Telekom, SAP and two research institutes. â€”Spencer Kimball

Convention and events industry is set to make a comeback

1:04 p.m. ET â€” Large, indoor gatherings of thousands of people are set to return faster than you may think, with some facilities getting ready to host events as soon as next month with safety measures like temperature checks, social distancing, reduced capacity and contactless registration.

“I’m very excited to be getting groups back,” said Mark Tester, executive director of the Orange County Convention Center.

Tester said their first event since the shutdown is a 10,000-person high school volleyball tournament in July, CNBC’s Contessa Brewer and Katie Young report. The center is aiming to host 12 events in July and August and anticipates a “ramp up” in the fall to its normally busy schedule, Tester added.

From March through the end of 2020, 64% of the conferences tracked by the International Association of Exhibitions and Events have been canceled. â€”Chris Eudaily

A worker wearing a protective mask gives out hand sanitizer to customers during happy hour at the Oscar Wilde bar in New York, U.S., on Wednesday, June 10, 2020.

People, some of whom are not wearing masks, have been gathering in big groups outside of bars and restaurants that are providing to-go services, the governor said at a press conference.

Cuomo called the problem “rampant” and said he will take away liquor licenses of bars and restaurants that are caught breaking the law.

“It is just disrespectful not to wear a mask,” Cuomo said. “It’s disrespectful to the health-care workers and essential workers who sacrificed themselves for 100 days, some of whom died and gave their life to crush this Covid virus.” â€”Emma Newburger

The doctor in charge of the COVID-19 unit at United Memorial Medical Center in north Houston, checks on COVID a patient who was hoping to be released this week.

12:15 p.m. ET â€” States that are reopening are reporting a rise in daily new coronavirus cases, with some of the hardest-hit states having lifted lockdown restrictions on or before May 8.

The daily number of new cases across the country seems to have leveled out, according to data from Johns Hopkins University, but more than 20 states are seeing increasing numbers of new cases recently, the New York Times reports.

The surge in cases in some states may be tied to the increasing availability of tests, but there are also reports that residents in reopened states have returned to salons and parks and stopped wearing masks and following social distancing recommendations. â€”Emma Newburger

A person gets a swab test for coronavirus at a free pop-up testing location, for symptomatic and asymptomatic individuals, in Boston’s Roxbury on June 10, 2020.

11:26 a.m. ET â€” Early in the pandemic, the Food and Drug Administration used emergency powers to clear the way for tests to be quickly put in use, but recently preliminary findings have found potential problems with some tests, the Associated Press reports.

“In the beginning, the FDA was under a lot of pressure to get these tests onto the marketplace,” said Dr. Steven Woloshin of Dartmouth College. “But now that there are plenty of tests out there, it’s time for them to raise the bar.”

The FDA said it has already asked multiple test makers to do additional accuracy studies and that it is tracking reports of problems. The agency did not say how many of the more than 110 authorized screening tests it has asked for additional studies, according to the AP.

Most COVID-19 tests in the U.S. don’t currently give data on real-world performance, including how often there are false positives or negatives. That information is lacking for all but a few of the roughly 80 commercial screening tests available, according to an Associated Press review.

Many commercial test makers submitted results from 60 samples for initial clearance, the minimum number required, and mostly used lab-produced specimens of the virus. But most actual tests are carried out in hospitals, clinics and even parking lots, which are sometimes imperfect conditions that could throw off test performance.

Experts say larger studies are needed to get a true measure of a test’s accuracy. â€”Chris Eudaily, Associated Press

PPP funding is about to dry up for these small business owners. Here’s what’s next

10:50 a.m. ET â€” Some entrepreneurs who applied for the Paycheck Protection Program are close to exhausting their funding, which was originally intended to cover eight weeks of payroll, rent, mortgage interest and utilities.

It’s a particularly scary time for entrepreneurs in the leisure, hospitality and restaurant industries, as they begin to emerge from lockdown and face lower revenues.

Lisa Hess, owner of Lucy’s Coffee in San Luis Obispo, California, has about two weeks of funding left after borrowing about $ 23,000 from the PPP.

“We’re a college town, and February through June are our busiest months,” said Hess, who’s had her cafÃ© for three years. “The timing was terrible: We literally started breaking even three weeks before the shelter-in-place order.”

Senate Democrats have proposed legislation that will allow cash-strapped businesses to get more funding from PPP, provided they are close to exhausting their original loan and their revenues have fallen by at least 50%.

In the meantime, businesses are preparing themselves for uncertainty. They’re looking into grants and other small business loans to get through the months ahead. â€”Darla Mercado

Britain’s Prime Minister Boris Johnson buys a coffee from Freddy Staple, operations manager for Caffe Concerto at Westfield shopping center in east London on June 14, 2020 as visits the centre to see the coronavirus measures in place in advance of the reopening tomorrow. From Monday, non essential shops such as clothes shop will be allowed to open to the public as long as they take Covid safety steps. (Photo by John NGUYEN / POOL / AFP) (Photo by JOHN NGUYEN/POOL/AFP via Getty Images)

Britain is scheduled to potentially let up on some of its lockdown measures on July 4 as the number of Covid-19 cases decline.

“As we get the numbers down, so it becomes one in 1,000, one in 1,600, maybe even fewer, your chances of being two meters, or one meter, or even a foot away from somebody who has the virus is obviously going down statistically, so you start to build some more margin for maneuver,” Johnson said. “We’ll be looking at that and keeping it under constant review as we go forward to the next step in our plan, which is, as you know, July 4.” â€”Lorie Konish, Reuters

Aides wearing masks stand behind White House economic adviser Larry Kudlow as he speaks to reporters about the economic impact of the coronavirus disease (COVID-19) at the White House in Washington, May 15, 2020.

10:02 a.m. ET â€” White House economic advisor Larry Kudlow said that the U.S. economy is now in the “recovery stage” after saying last week that the economy appeared to reach its lowest point.

The unemployment rate declined to 13.3% in May from April’s 14.7%, a largely unexpected gain as states begin to lift restrictions and people start returning to work.

The $ 600 enhanced unemployment benefits created by the CARES Act to help people who lost jobs during the pandemic are set to end July 31.

Kudlow said the extra benefits are a “disincentive” for people who may not want to return to work because the unemployment aid pays more than their regular salary, and mentioned there will be “some kind of bonus” for those who return to work. â€”Emma Newburger

To check out charts that illustrate signs of recovery in these sectors, click here. â€”Hannah Miller

Swimmers on a beach in Palma during the first day of Phase 2, when it is possible to access beaches in the same province, island or territorial unit of reference established in the de-climbing plan, and when the town halls may establish limitations on access, which in any case will be free, and on capacity to ensure that the interpersonal distance of at least two meters between swimmers is respected.

8:54 a.m. ET â€” Travel restrictions are being lifted across Europe, but travelers from the U.S., Asia, Latin America and the Mideast aren’t clear yet, the Associated Press reports.

Many European countries are opening back up and allowing travel from the EU, Britain and the other countries in the passport-free Schengen area, according to the AP.

One notable holdout to the travel reopening push is Spain, which still has another week under domestic travel restrictions and will open up to foreign travel on July 1, the news service reports. The country is, however, having a two-week trial for visitors on Monday when thousands of Germans are flying to Spain’s Balearic Islands.

Germany, along with France and others, is lifting border checks Monday and rolling back a worldwide warning against nonessential travel to exempt European countries, according to the AP. Nonessential warnings are expected to remain in place for countries where there are still travel restrictions like Finland, Norway, Spain and Sweden. â€”Chris Eudaily, Associated Press