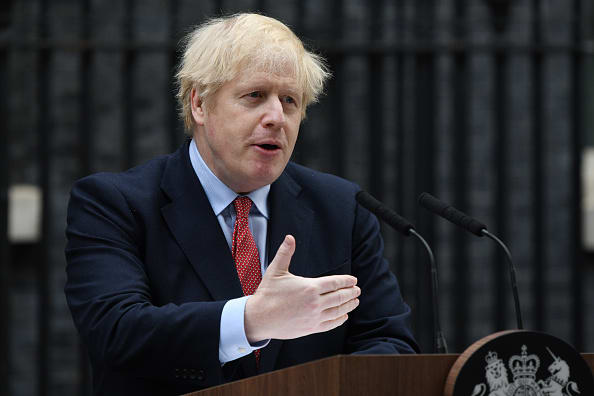 Prime Minister Boris Johnson speaks in Downing Street as he returns to work following his recovery from Covid-19 on April 27, 2020 in London, England.

The U.K. government has taken its first tentative steps to ease some strict coronavirus lockdown measures and slowly begin to reopen society and the economy.

From Monday, citizens who cannot work from home are being “actively encouraged” to go back to work, but avoid using public transport if possible. People will also be allowed to take unlimited amounts of exercise from Wednesday.

In a televised addressed Sunday evening, Prime Minister Boris Johnson said that very young children could be back at school by June 1 at the earliest, with older children having some time back with their teachers before the summer break.

Johnson added that “some hospitality places” could be open in July, also stating it will “soon be time” to impose quarantine on people traveling to the country by air.

More details are set to be unveiled on Monday and the prime minister stressed the plans were conditional on key tests being met, such as the rate of infection remaining low. Johnson also announced a new threat level warning system for the virus with five different stages (England is now trying to transition to stage 3 from being at stage 4).

“This is not the time simply to end the lockdown this week,” Johnson told the British public. “Instead we are taking the first careful steps to modify our measures.”

Earlier on Sunday, Johnson tweeted confirmation that the government guidance had changed from “stay at home” to “stay alert.” The instructions are now for people to stay at home as much as possible, work from home if you can, limit contact with other people and keep your distance if you do go out (2 meters apart where possible).

The U.K.’s devolved nations have rejected the new slogan, however, deciding instead to keep the “stay at home” message.

On Tuesday, it was confirmed that U.K. has the highest official death toll as a result of the coronavirus in Europe. It meant that the country surpassed Italy as the worst-hit country in the region and is now second only to the U.S. for Covid-19-related deaths worldwide. On Sunday, that death toll hit 31,855 with a rise of 269 in the past 24 hours.

Experts have warned against international comparisons, citing differences in demographics and because each country has its own way of measuring the number of deaths. The U.K. only recently started adding deaths in the community, such as nursing homes, to its official statistics; previously, it had included only those who died in hospital.

The U.K. government has faced intense criticism from opposition parties, with some lawmakers suggesting Johnson was too slow to respond to the pandemic when it first emerged. The strict measures were first imposed on March 23.

The U.K. leader â€” who himself has battled the disease and spent days in an intensive care unit â€” was initially reluctant to impose national lockdown measures at a time when hospitals in Italy were already being overrun. Downing Street has also come under fire for failing to provide enough protective equipment to hospitals and being late to roll out mass testing.

â€”CNBC’s Ryan Browne and Sam Meredith contributed to this article.