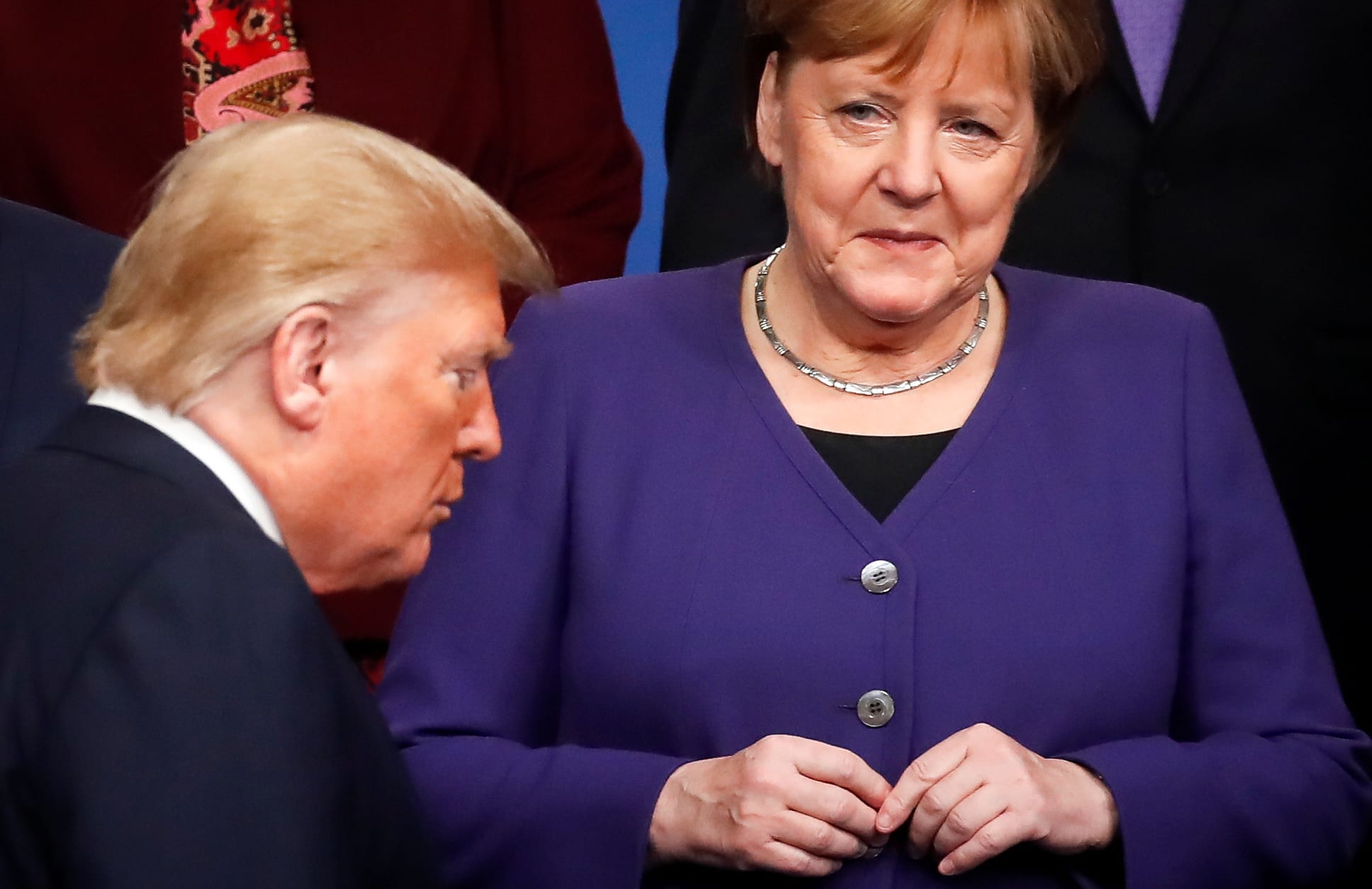 Germany’s Chancellor Angela Merkel (R) looks at US President Donald Trump (R) walking past her during a family photo as part of the NATO summit at the Grove hotel in Watford, northeast of London on December 4, 2019.

Diplomatic ties between Washington and Berlin have declined markedly in recent years and Germany’s foreign minister has appeared to warn that relations between the two countries may never be the same again.

In the biggest signal yet of how strained relations have become, Heiko Maas said this weekend that the alliance with the U.S. â€” which is important in terms of economics, defense and security â€” might not recover even if President Donald Trump’s rival for the White House, Democrat Joe Biden, won the forthcoming election.

“Everyone who thinks everything in the trans-Atlantic partnership will be as it once was with a Democratic president underestimates the structural changes,” Maas told German press agency DPA Sunday, Deutsche Welle reported.

“The trans-Atlantic relations are extraordinarily important, they remain important, and we are working to ensure they have a future,” Maas said.”But with the way they are now, they are no longer fulfilling the demands both sides have for them.”

Arguably the Western world’s most influential economies and political blocs, the U.S. and Germany have seen their relationship deteriorate during Trump’s time in office.

Defense spending, a brewing trade war between the U.S. and Europe and the threat of U.S. tariffs on German car exports are all bones of contention, as well as the mega gas pipeline Nord Stream 2 (a German-Russian project) and, most recently, the Group of Seven (G-7) alliance and the U.S.’ decision to withdraw troops from Germany.

Trump has repeatedly lambasted Germany, Europe’s biggest economy, a number of times since his election in 2016.

NATO has been a particular source of tension, with Trump calling out Germany on its defense spending. In mid-June, Trump once again rebuked the country by calling it a “delinquent” in its defense spending, saying it still has not met a commitment to spend 2% of its GDP (gross domestic product) on defense as required by a 2014 NATO agreement.

“We’re protecting Germany and they’re delinquent. That doesn’t make sense,” Trump said, adding that the U.S. was going to “bring down the soldier count to 25,000 soldiers,” arguing that the stationing of troops in Germany comes at “a tremendous cost to the United States.”

Trump also accused Germany, and the wider European Union, of treating the U.S. “badly” on trade, saying “so we get hurt on trade and we get hurt on NATO.” Trump has threatened to impose tariffs on European car imports, a move that would greatly hurt Germany which is the home of European car production.

Plans to withdraw around 9,500 troops from Germany has caused consternation in Europe and some criticism from U.S. lawmakers, concerned at how Russia could potentially exploit the withdrawal.

The Group of Seven (G-7) alliance of the U.S., U.K., Germany, Canada, France, Italy and Japan is also another arena of tension.

Trump has previously refused to endorse the conclusions of a G-7 summit, an act that German Chancellor Angela Merkel called “a bit depressing.” Relations took a further dive recently after Merkel rebuffed Trump’s invite to a G-7 summit in Washington due to the coronavirus pandemic. Trump’s wish to see Russia re-admitted to the group has also created a split in the group.

Germany’s relationship with Russia, particularly when it comes to energy, is another contentious issue. American officials are critical of Nord Stream 2, a mammoth energy infrastructure project that will transfer gas from Russia to Germany, bypassing Ukraine.

Trump said in 2018 that Germany was “totally controlled” by Russia and in December 2019, the U.S. slapped sanctions on the project, which is nearing completion, drawing anger from Russia and Germany. For its part, Berlin responded by saying that “European energy policy must be decided in Europe, not the U.S.”

The U.S. is considering imposing further sanctions on the pipeline project, a move that could reportedly attract retaliatory measures from Germany; Merkel’s administration is considering pressing for coordinated European Union action, according to two German officials familiar with the discussions, Bloomberg reported Friday.

For Russia’s part, President Vladimir Putin’s spokesman Dmitry Peskov told CNBC earlier in June that any further U.S. sanctions on Nord Stream 2 “would be an attack for unfair competition that goes in contradiction to international law and rules on international trade.”

“We consider it to be very dangerous for (the) global economy and the economic environment. We know that our partners from Germany and European countries also feel (a) lot of concerns in front of this potential threat and we are determined to continue the construction works in the framework of this international project,” Peskov said.