Latest News
Home /70% of Dubai companies expect to go out of business within six months due to coronavirus pandemic, survey says 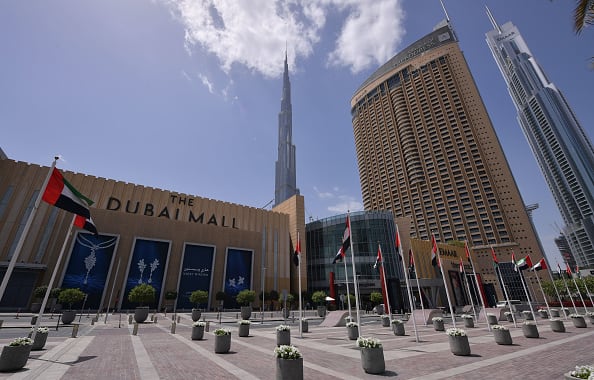 A picture shows the closed compound of the Dubai Mall amid the COVID-19 coronavirus pandemic on March 23, 2020 in the United Arab Emirates

DUBAI, United Arab Emirates â€” A staggering 70% of businesses in Dubai expect to close their doors within the next six months as the coronavirus pandemic and global lockdowns ravage demand, a survey by the Dubai Chamber of Commerce revealed Thursday.

The Chamber surveyed 1,228 CEOs across a range of sectors between April 16 and April 22, during the emirate’s strictest lockdown period. Nearly three-quarters of those surveyed were small businesses with fewer than 20 employees. Of the respondents, more than two-thirds saw a moderate-to-high risk of going out of business in the coming six months: 27% said they expected to lose their businesses within the next month, and 43% expect to go out of business within six.

Dubai, which has one of the most diversified and non-oil dependent economies in the Gulf, relies on sectors like hospitality, tourism, entertainment, logistics, property and retail. Its hotels and restaurants are internationally acclaimed, but nearly half the restaurants and hotels surveyed by the organization expected to go out of business in the next month alone. Some 74% of travel and tourism companies said they expected to close in that time, and 30% of companies in transport, storage and communications expect the same fate.

“Full and partial city-lockdown measures are bringing demand in key markets to a standstill … The double-shock impact is pushing economic activity down to levels not seen even during the financial crisis,” the Dubai Chamber wrote in its report released Thursday, entitled “Impact of Covid-19 on Dubai Business Community.”

A Dubai Chamber spokesman later on Thursday qualified some of the survey’s results, saying in a statement that “Dubai Chamber surveyed 1228 out of 245,000 companies in Dubai in April when the lockdown measures were in the most strict phase … their sentiments were based on the expectation that the strictest lockdown phase would be prolonged.”

“We anticipate that business confidence will improve significantly in the coming weeks and months as businesses return to more normal operation.”

But amid the current uncertainty, businesses in UAE’s seven emirates, as elsewhere across the world, are slashing salaries, putting employees on unpaid leave, and reducing staffing levels.

The UAE has just over 26,000 confirmed coronavirus cases, with 233 deaths as of Thursday. Dubai, the country’s commercial and tourism hub, imposed a strict 24-hour lockdown on its population of 3.3 million for about three weeks beginning in early April.

I so far think we’re looking at a minimum population contraction of 10% for the year.

While the lockdown has been loosened through the Muslim holy month of Ramadan allowing malls and some businesses to open at a 30% capacity, demand is slow to return and company layoffs are continuing. Most hotels sit empty and tourism is nonexistent: there have been no inbound passenger flights for non-UAE nationals since March 24.

For a country that relies on an 80% expatriate population for much of its economic activity, the stakes are even higher: if residents can no longer find work, they will likely return to their home countries, depleting the consumer base needed to enable any economic recovery. More than 150,000 Indian nationals and 40,000 Pakistani nationals had already left or registered to leave the UAE by early May, according to those countries’ diplomatic missions.

“I so far think we’re looking at a minimum population contraction of 10% for the year,” Nasser al-Shaikh, former director general of the Dubai government’s department of finance, tweeted earlier this month.

The Dubai Chamber added in its report: “Though this is a temporary shock for most markets â€“ with recovery to gradually kick in as soon as restrictions are eased â€“ trade with GCC markets is particularly challenging as they suffered double oil price / COVID-19 shocks.”

In late March the Dubai government announced a 1.5 billion dirham ($ 408 million) stimulus package aimed at enhancing liquidity and cushioning the blow of the virus lockdowns, which included a raft of fee refunds and reductions, and reduced utility costs. Abu Dhabi in the same month announced a $ 27 billion emergency stimulus plan to aid private sector businesses and banks.

The UAE’s central bank also deployed a $ 70 billion package to help commercial banks provide debt relief. But many businesses still need more support, or are hesitant to take on new debt given the shaky outlook for recovery, according to reports.

The Dubai Chamber report notes that in March, “banks seem to have increased lending to SMEs which saw a 5.3% y-o-y growth, to reach a value of AED93.4 billion … This improvement was mainly due to the government stimulus package announced in March.”

“Dubai Government continues to monitor and offer support where necessary to help all of Dubai’s business community during this time,” a Dubai Chamber spokesman said in the hours after the survey’s release.

The coronavirus crisis follows a number of years of declining revenues for some of the emirate’s most important sectors, primarily real estate and hospitality. Residential property prices had already fallen 30% from their 2014 peak amid oversupply and weakening demand, and revenue per available hotel room was down more than 25% since 2015.

Last year Dubai’s economy grew at just 1.94%, its slowest pace since the dark days of its near economic collapse in 2009. That crisis, more than ten years ago, was sparked by a property crunch that forced Dubai to seek a $ 20 billion bailout from its wealthier and more conservative neighbor, UAE capital Abu Dhabi.

But the global pandemic will likely exact a toll on Dubai far greater than the downturn of a decade ago. The Chamber’s report warned: “The impact of COVID-19 crisis on the world economy during 2020 is projected to be greater than the 2008-09 financial crisis.”