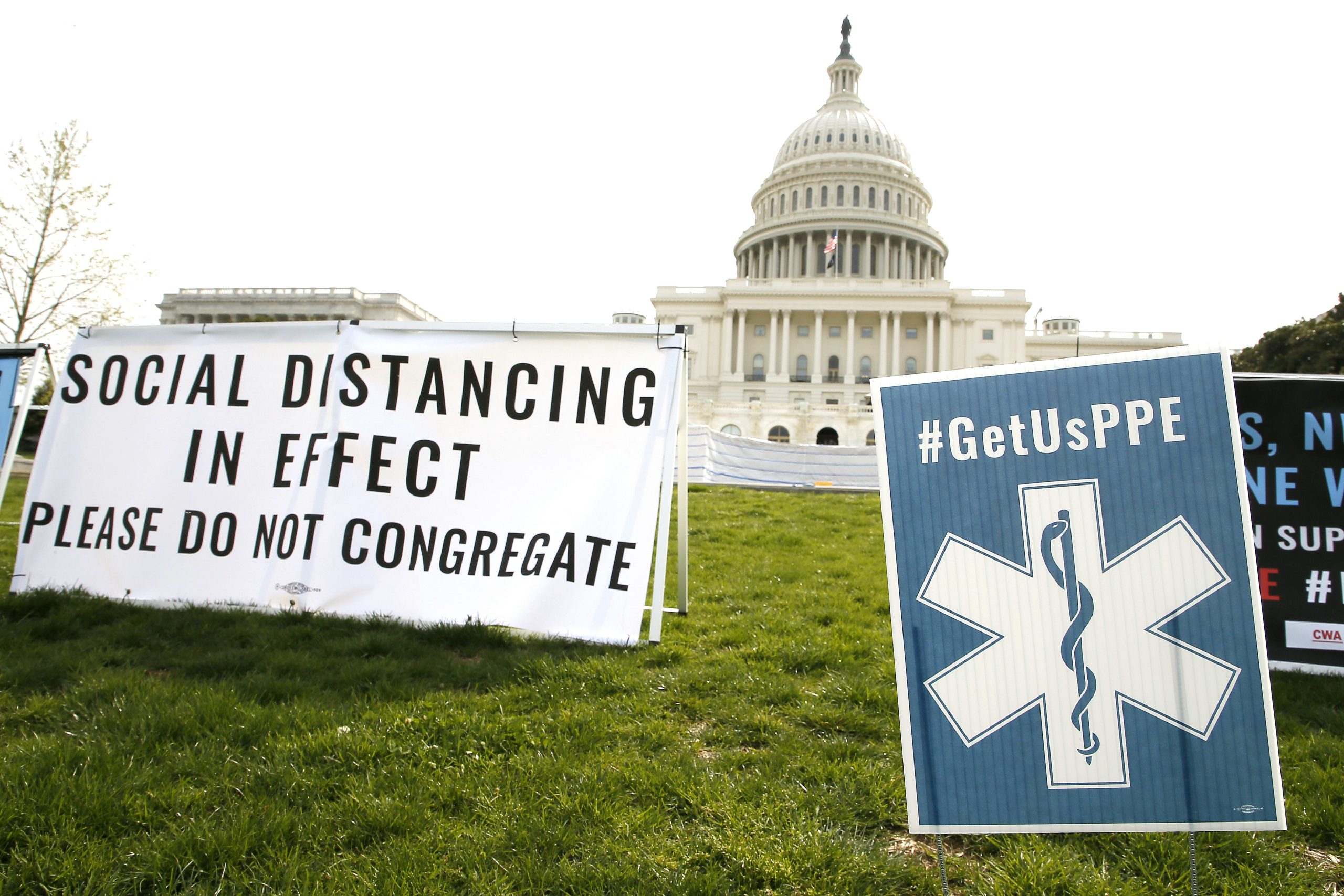 In a protest designed to adhere to social-distancing, 1,000 pop-up signs were arranged on the lawn of the U.S. Capitol Building showing the faces of nurses and frontline healthcare workers pleading for adequate personal protective equipment (PPE) on April 17, 2020 in Washington, DC.

Since emerging in the Chinese city of Wuhan late last year, the coronavirus disease has spread to 185 countries and territories â€” infecting more than 2.7 million people and killing over 190,000 globally, according to data compiled by Johns Hopkins University.

To stem further spread of the virus, authorities around the world implemented measures to lock down countries and cities to varying degrees. That includes closing borders, shutting schools and workplaces, and limiting large gatherings.

Those restrictions, which the International Monetary Fund called the “Great Lockdown,” brought much of global economic activity to a halt, hurting businesses and causing people to lose their jobs.

“This is a truly global crisis as no country is spared,” Gita Gopinath, the IMF’s chief economist, wrote in a blog post earlier this month.

Here are seven charts that show how the coronavirus pandemic has hit the global economy.

Many economists have warned that lockdown measures around the world will accelerate job losses â€” that’s already showing up in unemployment numbers in several economies.

The services industry is a major source of growth and employment for many countries, including the U.S. and China â€” two of the world’s largest economies and consumer markets.

But both countries reported sharp declines in retail sales as lockdown measures during the pandemic forced many stores to shut and kept consumers at home. A surge in online sales reported by some retailers, such as Amazon, failed to stem the overall fall.

Economists warned that consumers may not resume spending even after lockdown measures are lifted. That’s evident in the “slow improvement” in retail sales in China even after the country allowed a gradual reopening of businesses, said analysts from Oxford Economics.

“The slow improvement in household spending underpins our view that, globally, consumers are unlikely to rush back to the shops as soon as restrictions are lifted,” they wrote in a report.

A broader hit to the services industry has been observed globally, with businesses in the transportation, real estate, and travel and tourism sectors experiencing some of the largest declines in activity so far, according to IHS Markit.

Manufacturers, already weighed down by the U.S.-China trade war in the last two years, have once again come under pressure as the coronavirus spreads around the world.

The Covid-19 pandemic first hit manufacturers outside China that rely on factories in the Asian economic giant for materials and parts â€” also known as “intermediate goods” â€” to make their own products. But Chinese factories suspended operations for longer than expected as authorities worked to contain the virus.

As more countries impose lockdown measures, a greater number of manufacturing firms were hit. Some were forced to temporarily shut down, while those that remain open faced restrictions in getting their supply of intermediate goods and materials.

On top of that, a reduction in demand for goods exacerbated the challenges that manufacturers face. As a result, factories across the U.S. to Europe and Asia have reported declines in output over the past month.

Another bad year for trade

Global trade, which was already slowing in 2019, is expected to be weighed down further this year.

Global economy to shrink in 2020

The coronavirus pandemic’s hit to economic activity has led many institutions to slash their forecasts for the global economy.

The International Monetary Fund, whose assessment of the economy is widely followed, expects the global economy to shrink by 3% this year. Only a handful of economies â€” such as China and India â€” are expected to grow in 2020, IMF said.

While the fund has penciled in a rebound of 5.8% growth next year, it said that recovery is “only partial as the level of economic activity is projected to remain below the level we had projected for 2021, before the virus hit.”

“The cumulative loss to global GDP over 2020 and 2021 from the pandemic crisis could be around 9 trillion dollars, greater than the economies of Japan and Germany, combined,” Gopinath, the fund’s chief economist, wrote.

WATCH: Why we’re facing the worst recession since the Great Depression